Dallas Green is a Canadian singer songwriter who records under the alias City and Colour (get it, Dallas = City, Green = Colour?) and was formerly in the post-hardcore band Alexisonfire. But two further polar opposites of music you could not get. Green plays acoustic melodic folk as City and Colour but while in Alexisonfire it was screamo all the way. Playing in Mandela Hall under the moniker of City and Colour, on Tuesday night GiggingNI went along to get a taste of his new sound.

But first things first, Lucy Rose and her band take to the stage to warm up the Belfast audience. “Into The Wild” showcases her beautiful songbird voice, over the simple melodic guitar line and intrigues the audience who are gradually filtering into the venue from the cold. “My Life” is trademark Lucy Rose, breathy soaring vocals over beautiful melodies and it has a calming and relaxing effect before the pace is ramped up with the bass heavy “Cover Up” from her most recent release, Work It Out. This sophomore album has seen Rose take a slightly different direction with her music, a bolder, more synth driven sound has emerged and it suits her and sits well alongside older songs like the twinkling “Middle Of The Bed” which gets an airing next.

Capitalising on the crowd singing along, Rose leads us next into “Shiver“, a story of lost love and yearning. It’s a relatable subject and we all obligingly sing along “if we turn back time could we learn to live right”, lost in the moment. Lucy Rose has the innate ability to appear so fragile and small yet has a strangely captivating power in her songs and quivering vocals that intrigue music fans everywhere. On “Bikes” and “Nebraska” she showcases her strength of song writing and all too soon our time is up. A regular visitor to Belfast, catch her when she is next here, you won’t be disappointed.

By the time City and Colour take the stage we are all nicely warmed up, by the body heat, the incense-infused room (yes he was burning incense on stage, I felt like I was 15 again and had just been to Fresh Garbage), the alcohol, but mostly Lucy Rose, and so when Green launches into “Woman“, the lead single from 2015’s release If I Should Go Before You the crowd go wild. “Woman” is a hazy 9-minute-long affair which gradually builds up through swirling guitars and rhythmic base and the pay off is worth it with Green’s voice sounding eerily like Jeff Buckley at times.

Next up is “Northern Blues“, a more upbeat song with a bit of groove to it, with its driving bass line and this showcases Green’s excellent vocal range from his beautiful falsetto to his natural full voice. On “If I Should Go Before You” the new direction of the album is evident, a more electric and bluesy feel, but still with the existential lyrics, it’s one of the stand-out songs of the night for me. “Killing Time” is more radio-friendly and Green is content to let the band do the talking through the music on this song, as he seems to relish his role as singer and moves along to the beat. That is until a random hand from stage left appears to furnish him with an electric guitar and he joins in on the bridge. “Hello, I’m in Delaware” is given an airing next and it takes the crowd a moment to recognise it as it is given a new twist and slowed down into a Country Blues ballad, with three-part harmony, played on a pedal steel guitar. Always a plaintive mournful song this version just hits right in the heart and it’s great to hear a reworking of an old song.

Content with breaking our hearts, Green interacts with the crowd for the first time in the show by asking, “Have you brought your dancing shoes? Tie ’em up tight!” and proceeds to play “Wasted Love” with its velvet guitar tone and smooth riff, and it gets the crowd moving and singing along, glad of the distraction from the previous heartbreak. In any case, if Dallas Green asks, you’re dancing. On “Lover Come Back” the Blues feel is continued, with the keyboard piano element adding an warmer sound. Green tells us the next song is about ‘being nice to each other’ and “We Found Each Other In The Dark” from 2011’s Little Hell is played to rapturous applause from the crowd.

It’s a fan favourite and although older still sits well in the set with the newer electric songs due to its Country-tinged sound. Throughout the set there has been various guitars changing hands between Green and his guitar tech so when he swaps one over and strums out a few intro chords of “Sleeping Sickness“, he jokingly says, “Let’s pretend that didn’t happen”, teasing us, before relenting. “Sleeping Sickness” is a stand-out track from 2008’s Bring Me Your Love and a fan favourite, which is evident from the sing along. On “Mizzy C” the keys and Leslie-effected guitar tones give it a more psychedelic feel which tempers well with the introspective lyrics about changing direction, then proceedings are slowed down and brought to a close with the waltz of “As Much As I Ever Could“.

Leaving the stage to applause, there’s uncertainty whether the performance is over so when Green appears back on stage alone with an acoustic guitar and harmonica there are cheers of joy. Cracking a joke of “this is my first time” as he drops the harmonica holder, we are treated to “Body In A Box“, an acoustic song which deals with mortality but in a weirdly upbeat way, more so like a celebration of life, and this too creates a choral effect with the crowd all singing along. To wrap up the night, “The Girl” is played, first by Green alone acoustically but halfway through joined by his magnificent 4 piece band ramping up the pace, bringing what is largely a sedate gig to a thundering close. As City and Colour leave the stage to applause and cheers I can’t help thinking that this is the music Dallas Green was always meant to make; after much soul searching, Alexisonfire whom I loved, seem a distant memory for a man who is playing Blues Rock with an amazing band and who finally seems happy with his choices and as long as he keeps playing shows like this then I’m good with that. 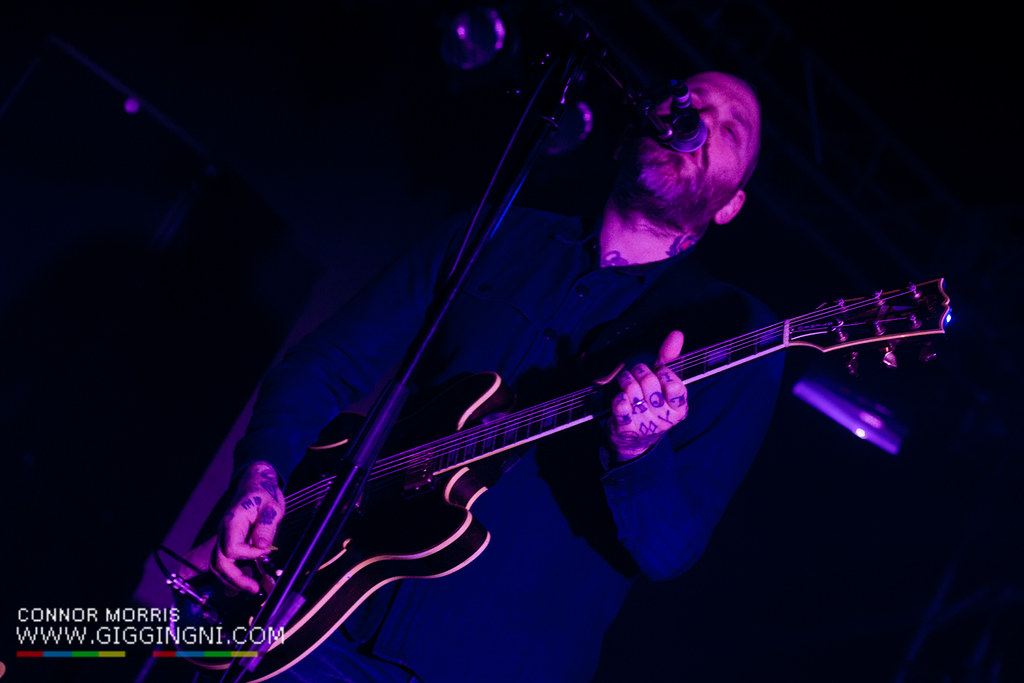 Idles: Selling Out the Empire in Sixty Seconds