A band that have been said to radiate filth, to be diseased, drug-addled and utterly corrupt, come to the Limelight.

The Fat White Family, with their lysergic blend of lo-fi Punk and warped Country, return to Belfast nearly two years after playing the Cathedral Quarter Arts Festival virtually unknown. The five-piece made up of Sauodi brothers, Lias and Nathan, Lias the notorious frontman on vocals and younger brother Nathan on keyboard. The said mastermind Saul Adamczewski as guitarist and Adam J Harmer, Jack Everett and Joseph Pancucci on guitar, bass and drums.

Each member with sunken face, ill-fitting vintage clothes and a look of complete malnutrition.

The most protruding character of the band is frontman Lias Sauodi, who has been known to have a tendency to be sexually explicit while on stage, amongst other things. Before the band had even taken the stage it was clear it was going to be an evening of unexplained madness and vulgarity.

The sound of the band’s signature bass line opened the gig. With the first song of the evening being “Tinfoil Deathstar“, the seventh song from the band’s most recent EP, Songs For Our Mothers. Lias Sauodi held centre stage in a suit perhaps more suited, as one review suggested, to a reprimanded court appearance. Sauodi stood unimpressed with one hand in his pocket accompanying the band’s distinct style of guitar and feedback with his eloquent drone.
The choice to begin the set with this song may have suggested that this was a night that would ultimately showcase the bands new album, but this was not the case.

Fat White Family, the true performers that they are, were here to put on a show and to never let their façade shift. This was just the calm before the storm of their carefully curated chaos. The next track was taken from the band’s 2014 album, “Champagne Holocaust“. As soon as the first notes of “Auto Neutron” sounded, it was clear that this was one of the band’s most well known and loved songs. The majority of the crowd shouted in recognition, something in which Sauodi loved. The song, that is most distinguished by its hypnotic guitar and synthesised notes, was an instant crowd-pleaser.

Naturally the live version of this track was perhaps less perfected than the recorded one, with the band to an extent ad-libbing certain parts. But this is only part of FWF’s charm, each experience different from its other. Somewhere between these tracks the eldest Sauodi sheds his layers, he is now without a shirt as he looms and leers over the crowd baring all. The frontman oozes a maniacal energy, a creepy sex appeal that could be compared to that of Iggy Pop. This was followed by the band’s most recent single, “Whitest Boy On The Beach“, a track that also is the first on their new album. Similar to that of the opening number the unmistakable sound of the bass guitar is apparent as one of the most prominent parts of the track. Echoes of their debut album can be heard in this track, distorted vocals paired with a chaotic electric mix is definitely reminiscent. The crowd could be heard joining in with the refrain of “Baby can you tell me how the universe began”, the atmosphere is electric.

One of the most notable things about the show is the people within the crowd that are dancing and obviously singing along. This is not a usual sight for such a initiate and somewhat claustrophobic show. “Raining In Your Mouth” came next, an infectious tune with vulgar content, a true testament to the band’s reputation. Beginning repetitive and catchy, finishing with Sauodi descending into frenetic squeals over screeching guitar parts, a pounding rhythm section, and blaring synths.

One of the band’s most notable influences are The Fall, made apparent by the 4 minute long ode in the form of their single, “I Am Mark E Smith“. Their ode was next on the setlist. The track, saturated with distorted guitars, a crawling tempo and droning vocals was a great edition to the set. It made way for a slight break between the up-tempo track before it and “Heaven On Earth” a track of equal aggression in its performance.

After another famous track from the bands previous album came another two from Songs For Our Mothers, “Satisfied” and “Learn To Rise“. Both of these tracks come hypnotic and unnerving all at once, all in a good way.

The second album is full of Nazis, dictators, serial killers but is strangely both infectious and romantic. This is ultimately shown through the song, the band’s penultimate song on the set list, “Goodbye Goebbels“. The tune of this song is ripe with romantic sentimentality, that somehow makes the song all the more unsettling. Despite the unorthodox tempo of this song, the band still manage to maintain their grimey and raw performance. It is aptly full of dreary tones and the ever-sour faces of the malnourished men on stage, an excellent choice to being the final song of the evening.

The evening ended on a last favourite from their debut album, Bomb Disneyland. An up-tempo ending, brimming with distorted guitars, primitive drum machines and a infectious riff. It was fast, it was loud and it was raw and everything that the Fat White Family are all about. It even included a mention of the band in the lyrics, a great ending to an evening of outrageous vulgarity and grime.

This band when recorded have always conveyed a certain amount of madness and sheer audacity to all, but live they’re just a different beast altogether. 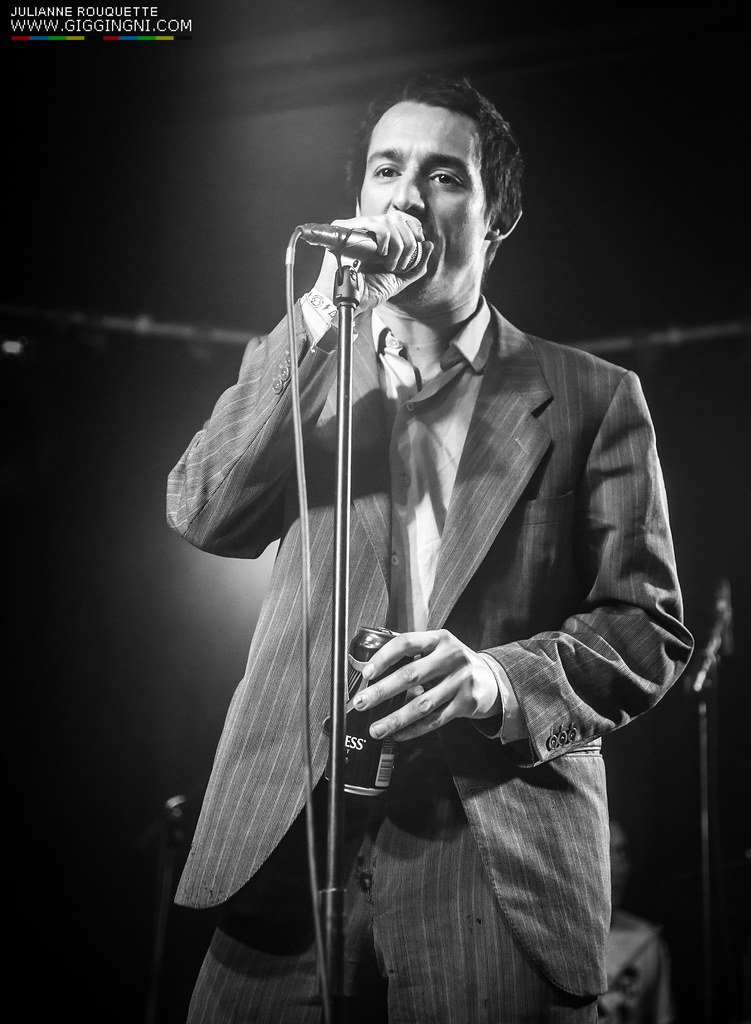