Although it might not look like much, Top of the Town is the venue of choice for the many bands that have performed in Omagh. It attracts a variety of bands of different musical genres and a multitude of people from all walks of life who enjoy the experience of live music. Although there has been many memorable nights at this venue, this night in question is somewhat unique, as it was a  free entry gig for a music video for “Throwing Shapes” from Part Time Pilots’ upcoming release.

The first band to take the stage is Mosmo Strange who have become a positive fixture of the Omagh music scene. In my own experience, their brand of introspective and riff-heavy Stoner Rock is extremely refreshing to see in normality of what is seen in a local music scene. The band take the stage and kick off the night with a superb cover of “A Girl Like You” by Edywn Collins. With heavy instrumentation and a superb vocal delivery, it never disappoints. The super sexy stoner rock grooves are definitely infectious as the crowd push themselves as close to the stage as physically possible. Those in attendance can be seen singing along with the band’s material which really shows how it resonates with the crowd.

There is a new addition to the band, with Part Time Pilots’ bassist, Michael Hodkinson taking over drum duties. Even with a new member, the band remained instrumentally tight and cohesive throughout. Although the majority of their set consisted of material from their debut EP Art, the band performed a new song called “Radio Friendly” which shows that the creative well for the band has not run dry. Another new addition to the set was a cover of “First It Giveth” which was originally performed by Queens of the Stone Age. With lead singer Gavin Scott taking a back seat on this number, guitarist Nolan Donnelly stepped up to the plate and gave an admirable vocal performance. This is a band that continues to impress me every time I see them live; they have the talent, charisma and musical repertoire to skyrocket to the next level.

After a short interlude, the headline action for the evening, Part Time Pilots, take the stage to a tremendous reception from the crowd. They kick the set off with “Tally Ho” which sets the momentum for the remainder of the set. With solid instrumentation and infectious vocal melodies, the band commands the crowd, who can be seen singing along. Lead singer Enda McCrory reminds the crowd that they are filming tonight for a future music video for “Throwing Shapes” which receives a hearty response from the crowd.

Throughout their set, the band perform a selection of songs from their past releases which include “Little Green Men”, “Notions” and the ever potent “Dance Fucker Dance” which would foreshadow later events. After a few more songs, the time has finally come, with Enda informing the crowd that it is time to throw some shapes. The crowd goes completely unhinged, with mosh pits spontaneously forming on the floor before the band. The atmosphere was absolutely electric, but I kept thinking to myself about what people in the downstairs bar would be thinking was going on.

Enda introduces the next song as a Green Day song which instantly took me by surprise. This was a clever ploy which unveiled itself as a cover of “No One Knows” which was originally performed by Queens of the Stone Age . I never get bored of Part Time Pilot’s rendition of the song as they truly do it justice, plus it is always good to see a bass solo during a song, more songs should have these.

To their dismay, Enda informs the crowd that like all good things, their set must ultimately come to an end. To finish the night, the band performs “Throwing Shapes” one more time and for the last time of the night, the crowd becomes unhinged once again. After a stellar set, the band leaves the stage with the crowd still wanting more. This was an excellent night, as it is never a chore to see Mosmo Strange or Part Time Pilots in their element and do what they do best. I patiently wait for the release of the music video for Throwing Shapes as it will serve as a record for an awesome night of music, craic and banter. 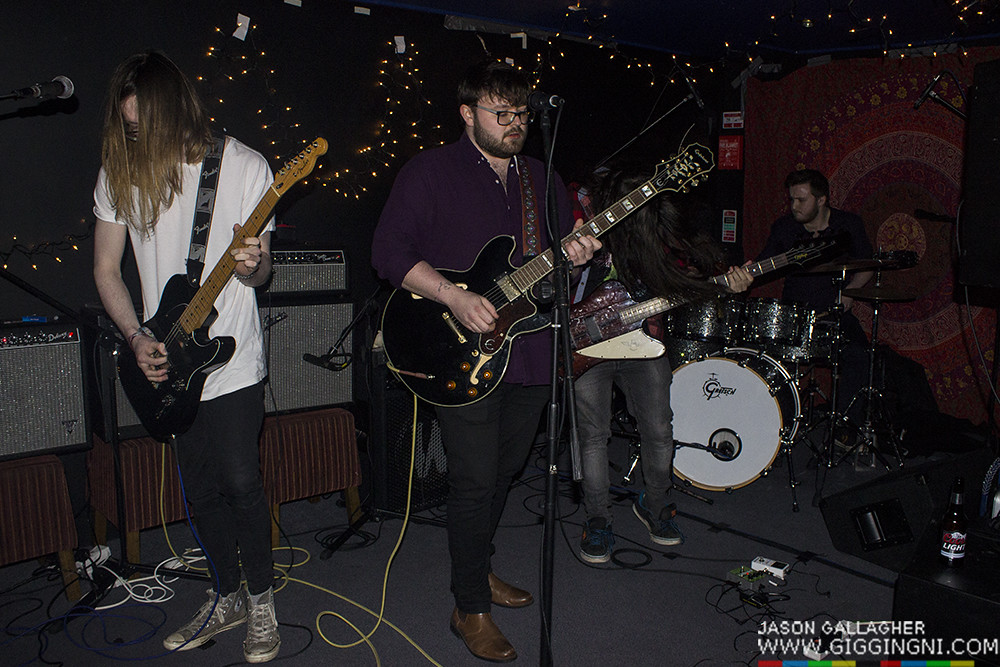