In Case Of Fire – Limelight 2, Belfast

There was a sense of nostalgia and excitement in the air as Limelight 2 began to fill up, awaiting the long overdue return of the extremely talented In Case Of Fire.

The evening began with heavy punk rock trio, Duellists. They eased the crowd in with their interesting and melodic riffs, guitar delays, and heavy poignant vocals. They blasted their way through their first few songs, and had time to chat to the crowd about the sunny weather outside.

Duellists had a very strong and big sound for only three members which is a real credit to them. Their energy and passion was electric. Their song “Drums” introduced a new, fresh melodic guitar riff which intensified the atmosphere although this new direction was craving a new style of vocal line. The end to Duellist’s set was unexpected, with some stops and stripped back sections, which then lead up to a final build up to end the set with a real bang.

The gig felt lively and the energy was building as the crowd laughed and chatted after Duellists left the stage. The crowd was excited and appreciative of the great local talent we have currently in Northern Ireland.

Duelists live on stage at Limelight 2.

Gascan Ruckus emerged onto the stage and their confidence radiated from the stage to the crowd as they instantly began chatting to the audience ending with another comment about the weather “Thanks for coming down on such a sunny evening”. The Armagh four-piece were really humbled with the turnout.

Pink Lights painted the stage as they began the catchy, colourful “These Days”, which the guys have just recently released a music video for. The fun, pop guitar intensified the energy in the room as the crowd swayed along. It was great to hear Declan McBride’s Armagh vocals strongly carrying the number, giving it a unique local stamp.

The harmonies blended in together perfectly, and the bands energy was terrific and infectious as they jumped about the stage. Their song “Fun” brought together punk guitar lines, with pop vocals, an interesting hybrid that works.

Banter and fun with the crowd made its way back in the form of the fire alarm going off for a few seconds, as lead singer Michael playfully said “this is part of the tune” to which the crowd laughed. The band impressed all with their wide range of songs. They ended with green spotlights filling the stage, mellow chilled out verses, floating vocals and exploding chorus’ as they appropriately ended their set with track, “Goodbye”.

The hustle and bustle of the night was building up to this moment, the moment In Case of Fire would make their comeback as a band, and to the classic Limelight stage. They emerged in darkness as they picked up their instruments to begin playing “Align The Planets” in full.

They began by Blasting into the scalic guitar riff of “This Time We Stand” as the drums pounded. This was their announcement, those first few chords had established them back and stronger than ever.

Blood red lights filled the stage as Steven Robinson’s piercing vocals soared and cut through everything in perfect balance. Sparks of electricity radiated off each member as they briefly talked to the crowd, “it’s been 5 years since we’ve played here”. The band were also singing praises to their two support bands, who were “amazing”.

The band travelled through the set, bringing the audience on a nostalgic journey. I felt that anyone could have been at the gig, having heard In Case Of Fire before, or only discovering them on this night, but there was something so universal about their set, something that brought everyone together, a quiet yet energetic intimacy where a crowd of people stood appreciating great local talent.

When the fantastic “Parallels” began, the audience were in awe, Robinson’s calm and floating vocals in the stripped back verses had almost a classical, dissonant feel which was almost hypnotic. When the chorus’ hit each bandmate played off each other’s energy and Robinson played and sang with a glass shattering passion under the piercing blue lights.
Steven Robinson hit every note with ease throughout the whole performance.
The set felt unbroken, like one long performance as atmospheric backing tracks played between songs, warm mellow yet ambiguous minor strings to set the scene as the band changed instruments and gathered themselves to give each song their all.

They started to bring the set to a close with “Second Revelation”. A techno electronic drum with glitch like sections brothering with the heavy guitar sections and delays with a pounding and skillfully prominent bass line. White spotlights on each member under a veil of red light, the atmosphere was incredible. The two front men, swaying and moving triumphantly around the stage against the mathematical and tight drumming.

In Case of Fire on the Limelight stage after five years.

To end the night, the classic encore and “The Pretender” and “Burning Bridges” were played to round off the incredible performance. A punchy and driving end, the rhythmic energy oozing into the crowd in an electric wave.

These guys are certainly back, and I for one can’t wait to see what they’re going to do next.
When I think of how I can sum up In Case of Fire, I don’t feel like they fall under any certain genre, they are a mix of so many, they are musical shape shifters, their music is real and iconic things are on the horizon for them. 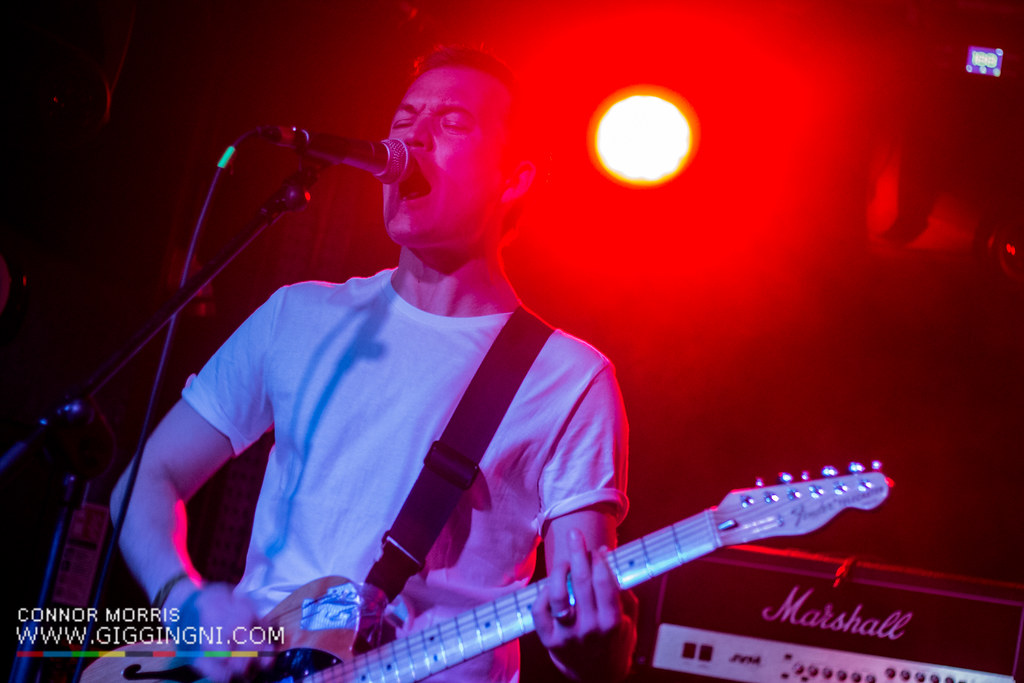