Call it what you like. The troubles, the war, the campaign – when it started in Belfast, St George’s church was slap bang in the middle of it.

The church was damaged an incredible 17 times, eventually scaring people away from attending. Slowly; too slowly, the violence waned, and St George’s gradually came back to life. Today it is a vibrant, thriving Parish, and the church now is in the position to open its doors to music events like the album launch of Ciaran Lavery’s Let Bad In for Cathedral Quarter Arts Festival.

The reasons are myriad why this album launch worked. The songs, the harmonies, the talent, the arrangements, the venue, and the support act –a band called In Their Thousands from Co. Donegal.

I saw three beards and a long haired bloke walk on stage. I wasn’t expecting what happened. Take their opener “Tear It All Apart” for example. High sweet harmonies, bare guitar, and then the lead vocalist Declan McClafferty was on his own. “I told you from the start I would be there.” You need to hear this man’s voice to believe it.

That was followed by a Sturgill Simpson-like country beauty “Too Many Times”, changing the tenor of the set completely. In fact their set didn’t stay still. From a version of “Pancho and Lefty” to their own truly beautiful “Woodcutter.” (I’ve just watched the video. I can’t believe I haven’t heard of this band before).

Twenty minutes or so after the support, the main man appeared. Ciaran Lavery stood at his mic, while Dan Byrne-McCullough sat with his guitar, and Rachael Boyd disappeared behind the keys. It only took a brief hello for them to launch into “Blood Red Fist” off the new album. Serious fast walking guitar accompanied humming vocals from the men before the words kicked in. “There’s nothing as sure as the things you know/ I will keep you when they’re letting go.” Then as it faded, Boyd’s piano became noticeable, like she had suddenly come to the window – she had been in the house all that time, keeping busy.

“My lips are stained with farewells and alcohol” – it was the multi-talented Rachael Boyd that stood out on this song. I have no title for it, the words  would go on to stay with me, as the aching violin and piano set down steps for Lavery’s voice to lay down the shingle it was carrying.

The venue, the gorgeous church with its decorated beams and its winding pews, it couldn’t be left unacknowledged. “If you buy a CD or a poster” Lavery’s quiet dryness told us, “you’re covered going to church for three months.” Joking aside though, the music from the stage was resonating off those wooden pews, reaching us warmly.

Launching Let Bad In didn’t mean that the night was bereft of Lavery’s classics. The gorgeous “Little More Time” was lifted with piano and a driving beat on the guitars. While a new arrangement of “Shame” pulled everything from the voices on stage and gave it an echo of Harry Nilsson with the piano.

“Okkervil River” from Let Bad In offered McCullough on a lovely long guitar intro and Boyd’s long vocals lifting it up, while Lavery sang through chalk, summoning pictures with his words, his sound.

Boyd and McCullough left the stage for “Train” from the new album. At times it vaguely echoed around the church, and when he hummed he reached tones simultaneously high and low, like he wasn’t really alone up there. He ended a capella to a soft silent room.

“When I was in Texas I stepped on stage and burst my trousers” he told us on returning for the encore of two parts. First up was a
solo Lavery on “Orphan”, forcing a church pewed call and response to end the evening. The finale was a tingling version of Bon Iver’s “Blood Bank“. The small stage held its own cast of thousands as the exquisite vocals of the support act, and Boyd, and McCullough, were brought on board to pad this adaptation of the song to its softest, to its tightest, right to the end of the night.

Photos by Tremaine Gregg. You can pre-order Let Bad In here 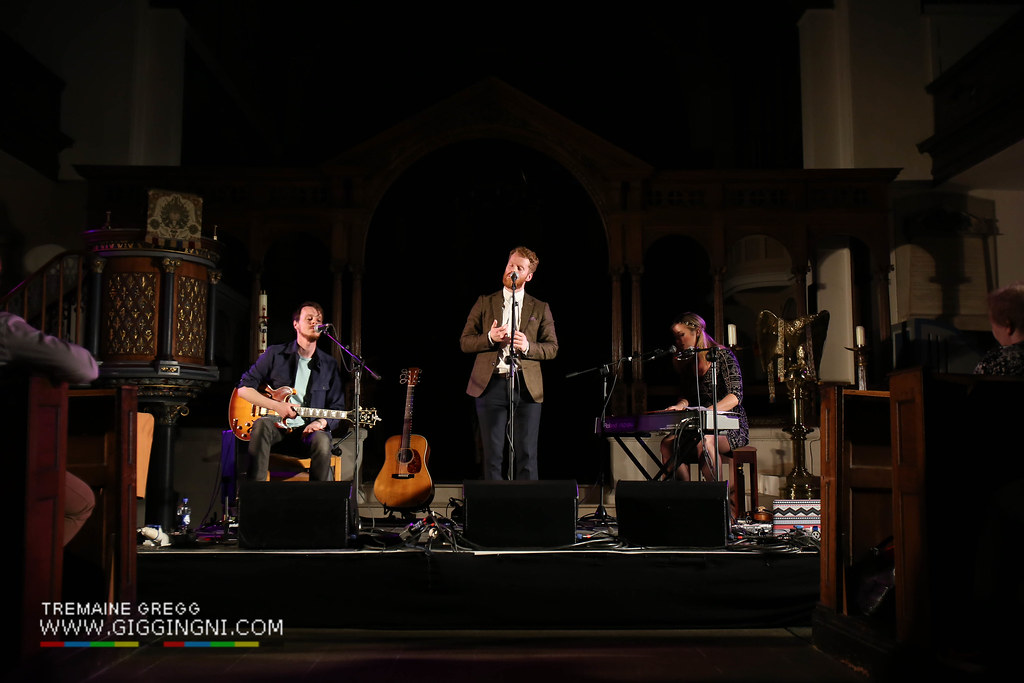