After eight years in Custom House Square, Belfast, this year’s Belsonic decided to take the plunge and move to the new and grand location of the Titanic Quarter. Boasting its biggest acts and most ambitious line-up to date along with high demand for tickets every year, it was surely the perfect time for the festival to make a move.

Arriving on Friday I was immediately impressed by the set up of the venue with the stage notably bigger, the addition of fair attractions and an improved VIP area. With British rock band ‘Bring Me The Horizon’ headlining the third night with support from ‘Don Broco’ and local boys ‘And So I Watch You From Afar’ the location combined with the upbeat vibe ensures that we are in for an enjoyable night.

Arriving first on stage, Don Broco enter with energy and their unique brand of English bravado and swag. Opening their set with ‘You Wanna Know’ the crowd are elated at their appearance. Taking a while to warm up vocally, lead singer Rob Damiani is charming with the whole band appearing as though they have walked straight out of a Topman shoot. Their music which can be described as an invigorated combination of pure pop and convulsive alt rock has meant the band have amassed a very substantial fan base which is evident from the reaction of the crowd.

Their song ‘Automatic’ with its summery vibe and more than catchy lyrics, is the first song to really get the crowd warmed up with everyone jumping and singing along. With his very specific singing style and proclivity for sharp enunciation, Damiani’s colloquial vocal helps add an edge to lyrics that can be sometimes rudimentary. After spending the last few years constantly touring the band rocketed very quickly into popularity earning themselves a spot in the UK chart. Leaping and jumping onto what could only be described as pews for affect and better visibility the band are a consummate fireball of energy using every inch of the stage to move around on.

Encouraging the crowd to get down before bouncing back up again, the audience is delighted. With good synchronicity on stage the band certainly have a boyband vibe about them with their very polished and sometimes over rehearsed routine. Their song ‘Nerve’ is definitely the highlight of their set with the verse epically crescendoing into the chorus and melodic harmonies. The inclusion of drummer Matt Donnelly’s vocals are notable with his high placed falsetto are incredibly impressive. While Don Broco could have easily continued for another half an hour with the crowd so thrilled throughout, their set was succinct, exuberant and above all fun. I look forward getting a chance to see Don Broco play a full set in their own show.

Next up, And So I Watch You from Afar emerge to a euphoric reception for the crowd’s local boys and immediately launch into their incredibly atmospheric brand of post rock. Releasing their fourth album Heirs in 2015 to huge critical acclaim back in 2015 the band have been locked away writing and took a well-deserved break to grace Belsonic with their presence. While the band can brilliantly articulate emotion and passion without speaking any words the break has noticeably made them hungry to perform, playing their absolute hearts out.

However somewhere throughout the set, attention started lagging and the crowd began to disperse. Having seen ASIWYFA many times I can’t help but feel that maybe this just wasn’t the right audience for them with the majority aging somewhere between 14 and 18. Perhaps placing them between Don Broco and Bring Me the Horizon wasn’t the right decision, however this does not take away from their always incredible performance.

As lead singer Oli Sykes appears on stage hollering to the audience “let’s do this” the mood of crowd instantly changed and everyone was ready to go. His charisma as a front man is compelling and from the moment he comes on stage he has the audience in the palm of his hand. Beginning their set with ‘Happy Song’ with its gang styled vocals and thumping riffs it is a brilliantly placed opening song. The infectious rudiments of the song along with fun and upbeat nature of the chorus make ‘Happy Song’ perfect for festival slots such as Belsonic.

Wanting to ignite some sort of chaos in the venue Oli screams “Lets open this place up, push it back, let’s make this place bigger”. Counting down before madness ensues the band are performing ‘Go To Hell, For Heaven’s Sake’. Having made no secret about wanting to bring their own genre of rock and metal back to masses and into the mainstream, songs such as ‘Go to Hell For Heaven’s Sake’ helped the band bridge the gap and create their very unique brand of metal core.

Not satisfied with the crowd’s reaction thus far Oli announces that it’s time for a circle pit before the band launch into ‘The House of Wolves’. Guitarist Lee Malia keeps the audience engaged with his sombre sounding guitar and while this song is more reminiscent of older work the progression of the bands instrumentation is even clearer in their live performance.  While Bring me the Horizon have certainly come a long way since their debut release ‘Count Your Blessings’ they are not a band to forget their roots as they go into ‘Chelsea Smile’ which harkens back to their heavier roots.

Yet again encouraging the crowd to get down Oli declares “that no one is too cool, too old or too much of a banana to get the fuck down.”  It’s refreshing to see a frontman who works as hard as Sykes does, along with his natural charm he just wants to ensure that every single member of the audience is having the time of their life.

With the convulsive electronic sounds of ‘Can U Feel My Heart’ coupled with the intimacy of the lyrics as the crowd whisper them back it is an extremely emotive moment and certainly a highlight of their set. ‘Sempiternal’ is a song with a lamenting amalgamation of regret blended with ruthless riffs from Malia. The song packs enough live drama into the titanic quarter with its anthemic chorus and frenzied response from the crowd who are wild at this point.

Finishing with what the crowd thought was the end, ‘Throne’ is a seemingly perfect ending with it’s boastful sing-along chorus. However, the band come back for more playing another three songs before actually ending.  Expressing his gratitude to crowd Oli tells the audience “you guys have been amazing” before beginning their last song ‘Drown’. The impressively infectious cut if this song makes it the ultimate ending to what has been an intense night 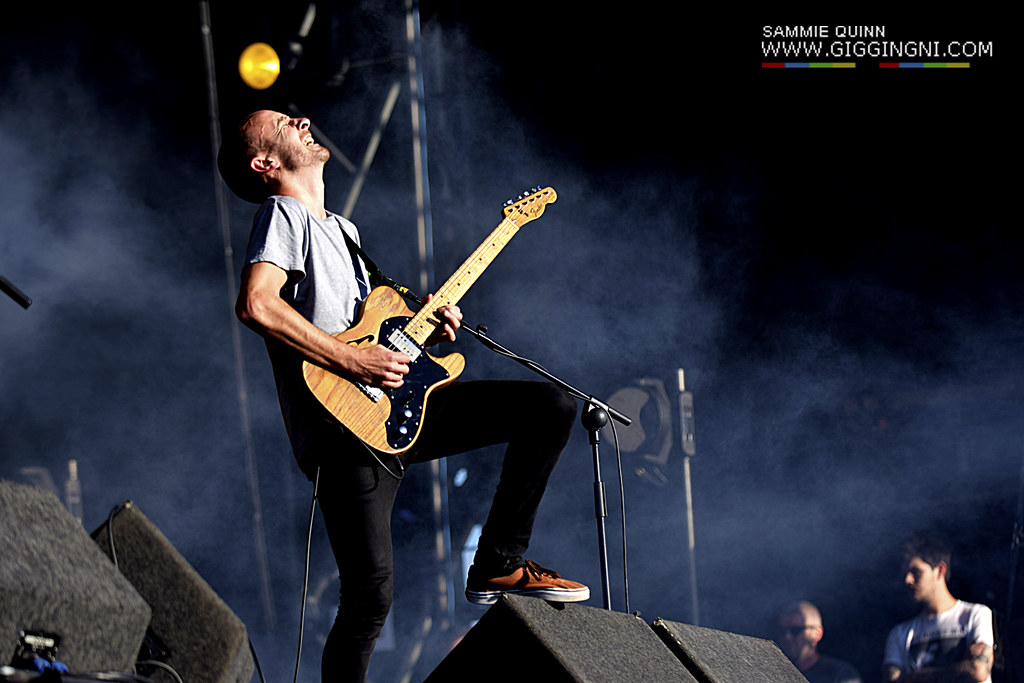 Tags:
and so i watch you from afar, belfast, Belsonic 2016, Bring me the horizon, Don Broco, festival, metal, titanic quarter

Writer for Gigging NI since 2014