It was an intriguing announcement, no doubt about it. In 2002, Charlie Simpson shot to fame alongside two fellow band mates, James Bourne and Matt Willis, in a trio known as Busted. With BRIT awards to their name and over three million records sold, fuelled by hits such as ‘Year 3000’ and ‘Air Hostess’, you can easily say their announcement in 2005 to disband came as a shock to their loyal core of fans.

Simpson founded Fightstar whilst reportedly growing discontent during Busted’s continued pop successes and left the popular trio in 2005 to focus his attention solely on his new post-hardcore outfit. And perhaps most surprising, Fightstar were actually brilliant. They grew in stature, receiving accolades from music press nationwide. It was the beginning of a new chapter for Charlie. Fast forward over ten years and the Busted re-formation was complete (perhaps unsurprisingly, nowadays – especially after several McBusted attempts) and the band were set to record and perform all around the United Kingdom.

The SSE Arena was the setting for the Northern Irish stop of this ‘Pigs Can Fly’ UK and Ireland tour and with the Belfast Maritime Festival starting to pack up and leave for another year, it was time for the old boys (new boys?) Busted to take centre stage.

Emma Blackery was the first support act to grace the stage. I think it would be best to get some background on her first. Emma shot to fame on YouTube and her continued success online as seen her gain over 1 million subscribers and over 110 million video views. It’s important to realise the times now. YouTube was created in 2005, when Busted split. It’s crazy thinking that but impressive once you realise the pulling power of online personalities and Blackery’s influence to attract an audience shouldn’t be undervalued.

But her brand of pop-punk did little to get bodies moving on the floor as expected for the opening slot in an arena show. Notoriously difficult. Her enthusiasm at times was infectious but the ringing of backing tracks and the lacklustre stage setup barely got audible crowd recognition. Her vocal talent however cannot be dismissed and based on song-writing ability, her career is certainly on an upward trajectory. It will be interesting to see where she goes from here. Plus shining acknowledgements from the next two acts can only help her cause.

In typical blast-from-the-past style, Wheatus arrived on stage with possibly the fastest stage turnover I’ve ever seen between artists. The house lights dimmed and Belfast was introduced to the American heroes from the past, known for US anthem ‘Teenage Dirtbag’.

It’s worth noting that Wheatus recently performed at a sold show Limelight last September. They are well rehearsed musicians with five studio albums to their names. But I believe they were the most excited by the prospect of an arena show. And rightly so.

The first strum of the guitar introduced ‘A Little Respect‘ as loud screams went up from the audience as bodies rushed to the fill the floor with teenage bedlam. Frontman Brendan Brown commanded the audience and showcased his spectacular vocal range throughout. With the funky bassist and playful keyboardist exchanging moves on stage, Wheatus performed ‘Fourteen’ and ‘Lemonade’ with aplomb proving that they aren’t one hit wonders, but instead have a repertoire of decent songs if you dare to delve deeper.

But the crowd were only waiting on one thing. Brendan said “I suppose it’s time now for that Dirtbag song now?” The crowd erupted and the first chords on the platinum-selling single rang out within the arena. The smiles stretched from ear-to-ear on the faces of the band members as Belfast continued to sing their hearts out to every word. I must say, it was special. It is precious when bands like these, who wouldn’t normally get the chance to play in such arenas, are welcomed so openly, albeit for a few songs.

An inflatable pig floated throughout the venue as Busted-time loomed large. Brief music blasts and strobe lights filled the venue five minutes before the trio of James Bourne, Matt Willis and Charlie Simpson raised through the stage floor and into the presence of the Belfast crowd. They’re back.

A smile of Charlie’s face spelt ‘You didn’t think I’d be back, did you?’ as he stood centre stage dressed in black, not forgetting a classy waistcoat and tan shoes. ‘Coming Home‘ marked their return to Belfast as the crowd’s eyes wandered around their impressive stage set-up. With three screens, displaying each member, and a large three-storey unit holding VIP guests with pig masks providing the backdrop as they cheered alongside their idols.

‘Air Hostess‘ ensured the party atmosphere continued as the trio went about their way in trademark style, utilising the large walkway within the crowd throughout ‘Everything I Knew’, ‘You Said No’ and ‘That Thing You Do’. There were moments of doubts on Simpson’s face as he battled to remember lyrics but in his defence, his counterparts are two McBusted tours ahead of him. I think a little doubt is nothing to be concerned about. Not like the thousands realised anyway as they continued to dance and jump their hearts out.

They left the stage in darkness and battled their way into touring cases as a live video displayed in the arena of them being transported to the stage in the middle of the crowd. James Bourne swapped guitar for piano for ‘Who’s David?’, ‘Easy’ and ‘Meet You There’ as Charlie Simpson and Matt Willis did their part in serenading their fans. An impressive drum solo from YouTube sensation Cobus Potgieter soon followed before the trio arrived back on the main stage.

New tracks such as ‘Easy‘ and ‘One of a Kind’ didn’t do much to ignite the crowd’s excitement from easier classics but did serve as fillers between the hits. ‘Thunderbirds Are Go’ and ‘Sleeping with the Light On’ of course got their deserved appreciation from the crowd as mobile phone lights lit the arena at the band’s request and voices bellowed around the venue.

Just before the encore, ‘Crashed the Wedding’ and ‘What I Go To School For’ got bodies bouncing and the screams from the crowd were at times deafening with the people in the seating arenas all getting off their feet and involved. As the band returned from their brief break after a chorus of ‘one-more-tune!’, ‘3am‘ and set-closer ‘Year 3000′ were performed to mass applause. Undoubtedly highlights of the show.

It was a strange sight seeing Busted back together again. I’m not quite sure if Charlie’s heart is  in it but their formation will continue for at least the rest of this tour and the completion of their next album. After that, who knows? I quite like Fightstar. 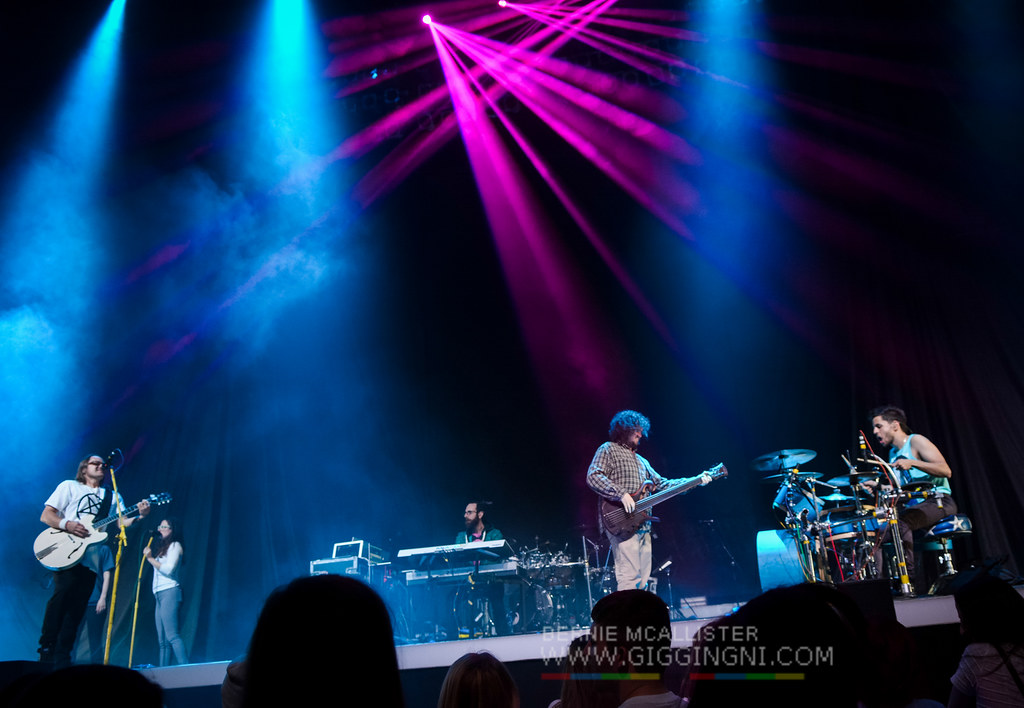