Giving Mike Scott The Space To Say What He Wants

A few nights ago, Open House Festival brought Waterboys founder and frontman Mike Scott to Bangor to talk about his life and times.

Anyway, during the week, Open House Festival brought Waterboys founder and frontman Mike Scott over to Bangor. He was talking with Gavin Martin, a local lad who started the fanzine Alternative Ulster all those years ago, and who is presently music critic at The Mirror. Scott had picked half a dozen or so music videos, and discussion around those led onto topics such as his song writing, shamanism, sartorial style and fatherhood.

First up was The Rolling Stones’ “Jumping Jack Flash”. They were all cool glasses and painted faces. He took “sartorial style” from the Stones apparently. “That was May 1968” he recalled, “the year I got turned on to music … it was the peak of how rock and roll sounded to me.” Martin pointed back to the video screen behind him. “That song” he said, “it’s shamanic?” Scott agreed, but didn’t put himself in the same boat, stating quietly “I’m not a shamanic performer.”

“How do you maintain your voice?” asked Martin. “I don’t smoke,” there was a bit of a pause. “I don’t drink liquor,” he continued. “And …” he leant over and hoisted up a bag stashed by the sofa, hoking about in it until he found his prey. “… And Halls Cough Drops” he smiled as he whisked them out of his bag and held up the evidence to his inquisitor.

I think it was around here that they discussed Northern Soul, and also how Scott followed some of the sartorial dress sense from this scene. I’ve no notes; I wanted to hear this conversation and stopped jotting things down. I think it pretty much ceased at Scott’s description of his outfits as simply wearing high wasted trousers. I wanted to hear more about this young man’s uniform of the time, but unfortunately the conversation seemed to fade away.

Martin commented on his distinctive piano style. “I’m self-taught” Scott responded, “I worked out the chords by myself,” which would explain his idiosyncrasies. Then he grinned. “I’ve worked with trained and talented piano players, and they can’t play songs like me … I find that very satisfying.”

Then Martin asked if Scott could cast his mind back – did anything stand out at any of his gigs … did anybody wave any prosthetic limbs? There was a long pause, Scott leant his head on his hand on the arm of the sofa. The pause caused bit of a build-up. This was going to be good. Then he finally replied. “No, I can’t think of anything,” and the conversation moved on. Bummer. Although, to be fair, the conversation moved on to explaining how he doesn’t actually look at his audience during a performance. He hasn’t since a gig in Germany long ago apparently. So his chances of noticing those prosthetic limbs are somewhat limited.

The second video clip showed The Beatles with “Hey Jude.” You know the one; the Beatles are all beautifully coiffured, seated at their instruments, tightly surrounded by fans doing the “na na na na-na-naaa.” Wow, imagine being in that audience. “Great song, great gig” nodded Scott. “I first saw that on the David Frost Show.” They moved on to talk about the beginnings of “Fisherman’s Blues”. He’d written it on a piece of paper while he was splitting up with somebody. He wanted his life to be uncomplicated. “I wish I was a fisherman, Tumblin’ on the seas …” was the stream of consciousness that this desire for a more straightforward life set free.

Although it is well documented that his father left when he was a child, it was still quite powerful to hear him talk about the ultimate impact this would have on Mike Scott the man. “Yes, dad left home” he stated simply. “It was never really explained and he eventually eased himself out of the picture.” The pair were reunited in 2007, and obviously it has been worked through. Well, I say obviously because sitting on stage talking about something so intimate to a room full of strangers would require that Scott was comfortable discussing it. And it seemed he was; as he went on to describe the circles that this set into spin at points in his life. Giving the example of working with producers – if they were older men he always wanted to prove himself better than them, show that he didn’t need them. “I wanted to be my own dad” he concluded.

And with that conclusion, it was no surprise to hear that he remains in Dublin to be near his young daughter. Indeed he mentioned her in conversation at various points through the night; in the way that the people with whom your time and thoughts are spent, tend to crop up in conversation. “In the last couple of years I’ve been writing a lot” he told us. Prior to that his writing had been slower, there had been less of it. “I know why” he grinned, “I’m always singing songs to my daughter. I make them up for her all the time.” This was followed by an audible “awwww” from the room. “Sometimes she says ‘Stop! Stop! Don’t sing!’” he laughed, and the room laughed with him. Seems that sometimes the poor child wishes she was a fisherman, tumbling on the sea…

In regard to his song writing he explained that he considers himself “a lone wolf … I like co-writing, but by email. I don’t want to sit in a room and say ‘What do you think of this chord?’” Indeed he uses email in his writing whether he’s co-writing or not. “I’m always sending emails to myself” he explained– whether that is forging the words of a song or writing the music.

The videos continued. Smokey Robinson’s “Tears of a Clown” caused some vague bum dancing on our seats. “Motown” Scott stated. “That’s how to make pop music … every note’s a hook.” There was Bob Dylan, and Midlake; Amy Winehouse, and Matthew E. White (“I like the veins he mines … he listens to the same stuff as me.)

Then there was that Old Grey Whistle Test footage of Patti Smith singing “Horses.” He talked about how he had met her when he was young. How she’d sorted a hotel room for him and taken care of him. He had also seen the other side though. He’d seen her “imperious and unpredictable” after a show, and went on to speak wisely about how this can happen to someone after performing, after commanding a stage but then not knowing “how to ground their energies.” Discussion then flowed naturally towards punk. No matter how much he loves his classics like The Beatles etc., he got a kick watching what punk was doing. “I enjoyed how punk put dinosaur bands in a new perspective” he explained neatly.

Mr Scott has a lot of good stuff ahead of him. He’s getting married this October, and a new album is due next year. “There’s a big hip hop influence in the sound of the next album” he explained. “Hip hop drum grooves … funk guitar by me … I’m taking things in new directions.” The double CD album is due in September ’17. 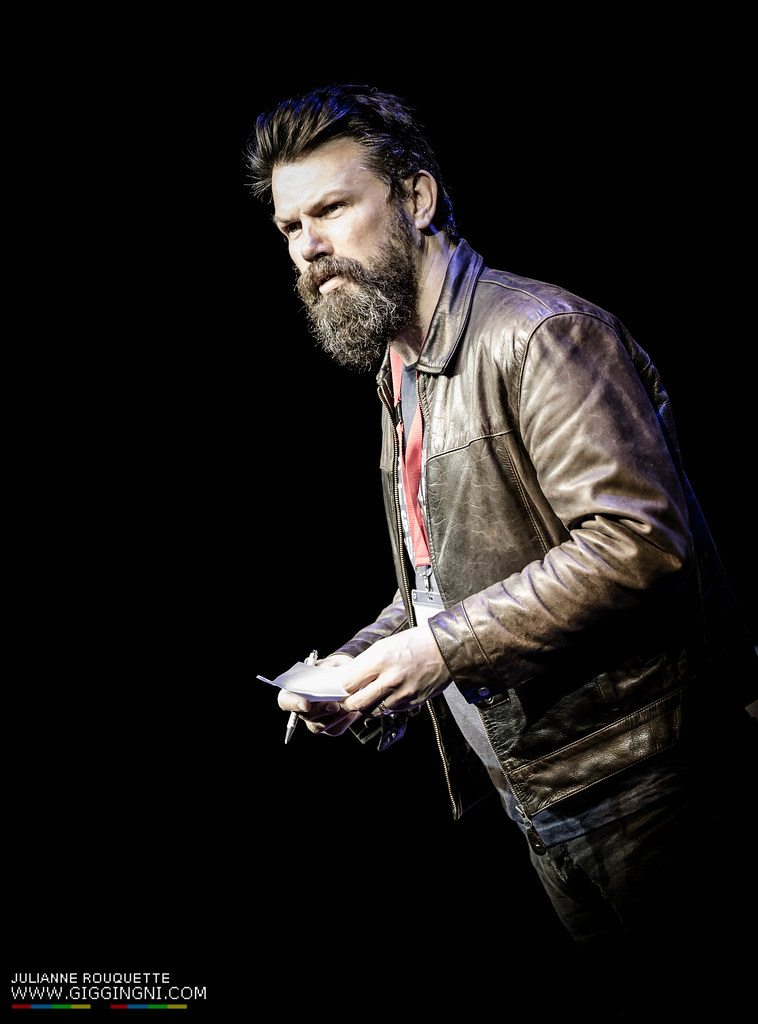