I’m in trouble. White Denim are better men than me, outpacing every chance I had at keeping up with their set list – mixing and mashing their tracks – gloriously extending the instrumentals – blowing the audience away then not giving us a chance to digest it before running straight into their next number. Gig notes be damned, this review is based on a bad memory and an egregiously good show.

Playing to a packed Limelight 2, on a t-shirt worthy summer night, they were supported by Wyvern Lingo, a Wicklow-spun 3-piece, from Bray to be precise. Describing themselves as Alternative/RnB/Pop, they were all those things, and more. I heard them outside before I entered the building, and thought yeah, that’s loud. It took all of 3 minutes effort to listen to them before I started enjoying what I heard though. What a difference giving somebody a chance makes, eh?

With keys, bass, synth, guitar and drums, there was a lot going on. Seems Drummer Caoimhe Barry is keen to push the raconteur envelope as well as all that percussion and all those vocals. Take “Beast at the Door” for example. This was written about a cartoon she saw when she was very young. She’ll never forget it apparently, which actually works in our favour as the resulting song she’s written is fine testament not just to a child’s beautifully terrorised psyche, but also to her writing skills in later years. With schmaltzy twangs opening, and the keys dancing nursery-like on top of those, the women’s tight harmonies tied this into a story – a curious drama that I imagine involves woods, an evil adult and a touch of infanticide. And as the song ended and the next track was introduced, the drums carried on in the background. They were at home up there, that was obvious. I noticed Karen Cowley‘s fetching waist accessory of electrical wires and sockets as she stood behind those keys. Saoirse Duane on guitar and vocals thanked us for being a good listening audience if I heard her right. I hope we were, they deserved it.

Right at the beginning of this year White Denim released their sixth studio album, Stiff, a 70’s laced journey through garage rock, and syrupy psyched out soul. Very nice indeed. Their time on stage in the Limelight 2 leaned quite a bit on Stiff, with helpings of previous albums.

There were a few occasions when front man James Petralli talked with the crowd, but generally the cut of the gig was that they would play. And play, and play some more. And run one track into another, then into a different album, then after that into a stretched instrumental marathon (it being the Olympics and all). The demeanour of the men up there spoke volumes though, maybe more than any chatty chat. They were enjoying this, and it radiated out onto us. We were free to just lap this up.

By song two (“Ha Ha Ha Ha”) Petralli was a real sweaty bollocks. No seriously. By number four or five he was dripping when he shook his head. I could see it in silhouette from the side. He would close his eyes and hold the guitar close and just be involved in that world, breaking it only to deal with the lyrics in his smooth-souled falsetto. Back and forth on the stage, up and down at the pedals, he’d raise his knee now and again involuntarily as he played. And he didn’t stop playing.

In stark contrast, it looks like baby –faced Steven Terebecki barely broke a sweat, as his cool ranged from slow-hand soulful chill to hypnotic thrill. That rhymes, forgive me, but watching the effortless speed with which he dealt those notes was compelling. Things just felt uncomplicated in that corner.

They left the stage at the end, before the encore. Many bands don’t bother in Limelight 2, there’s nowhere to go in that venue except into the crowd, only to have to return to the stage. But White Denim left that stage, then huddled at the side for a while discussing what to play by the looks of it. We needed to hand Petralli a guitar over from the stacked pile of equipment at the side. Then under red lights for the first minute or two it looked like Terebecki  was putting effort in. But that slipped back to easy-does-it very soon after. The encore ultimately turned into a discordant hard groove, and was that trumpet at the end? Did I hear trumpet? This night was a psychedelic meal. A grooved out, funked up, soul-oiled rocking thing of beauty.

In one of his chatty chats earlier on, Petralli said it had been eight years since they were last here. Lads, don’t do that again – you know where we are. 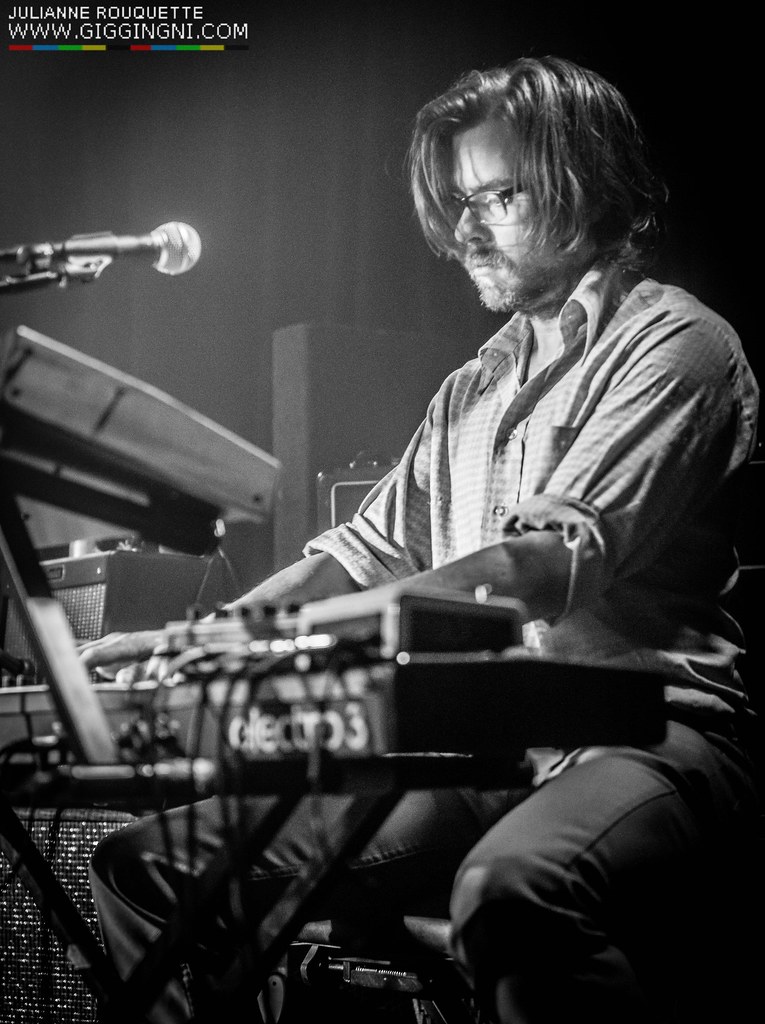