Tonight is somewhat different, as the Empire hosts a completely sold out show of The Rubberbandits,with support from local hip hop acts. Shizznigh Promotions are the organisers and it’s yet another of their high profile crowd pleasing acts which have been booked this year (next on my list is Alien Ant Farm in October!) Before the main event I caught Dsgrace, a Belfast hip hop act, and although I confess I am not much of a fan of rhyming over beats, they certainly got the crowd hyped up for the main act.

If you haven’t heard of the Rubberbandits where have you been? They are a comedy duo hailing from Limerick, with a satirical crude surrealist style. Self described as ‘gas c*ntists’ they tackle subjects such as substance abuse, violence and disaffected youth in their own special way.

On to the stage comes Willy O’DJ, resplendent in his mask and the crowd goes wild anticipating the arrival of the bandits themselves. Mr Chrome and Blindboy take to the stage with their trade mark plastic bags (they must be out a lot of cash since the bag tax came in) hiding their true identities. Kicking off with ‘Anthonys Eye’ it’s clear that this show is not for the faint-hearted but the crowd is loving it and singing along, and what strikes me is that although they deal in comedy the must be pretty good musicians also as this song has groove!

Moving on to the modern day romantic tale of ‘I Like to Shift Girls’, which mentions Nietzche and trying to measure a dog in the same lyrics, the laughs come thick and fast. ‘Bags of Glue’ is up next, with the Bandits explaining that this is an old song and they ‘wouldn’t write things like this anymore’. For their reservations it’s actually a pretty funky number which deals with the subject of needing to be inebriated to have relations with a rubenesque lady. The chorus is catchy as with everyone singing ‘a bag for me, a bag for you, lets get wrecked on bags of glue!’ (don’t try that at home kids!!) On ‘Hipster or Hobo’ they are poking fun at hipster style and asking the questions we all want to know (why do people think wearing old granda jumpers and listening to bands that ‘you wouldnt have heard of’ is cool?!).

‘Spoiling Ivan’ is played next, some people might know it from the Channel 4 show that the Rubberbandits had. A seemingly innocuous song about an adult man befriending a 6 year old boy called Ivan. Veering between sad and creepy with an upbeat happy tune, it’s a guaranteed earworm for days! ‘I Want to Fight Your Father’ takes the lads back to the mean streets of Limerick and is a pledging of love to Roisin, and a promise to fight her father as proof of love. As always, the tune could be a parody of many songs yet its innately The Rubberbandits own with lines such as ‘I wanna take a stanley knife and open up his face’. Nice.

Highlight of the set for me is ‘Dad’s Best Friend’ which is an unnervingly weird song about a middle aged disaster of a man who seems to have no redeeming features. The music is not unlike an Aphex Twin track and coupled with the bleak lyrics it induces unease in me but you can’t help shout along, especially with lyrics like ‘I’m heating streaky bacon in a trouser press!’ It’s actual brilliance.

‘Fight Me at Mass’ is another highlight for me, with its hip hop beat and hilarious lyrics about having a scrap in a place of worship ‘blood upon the tabernacle and sweat upon the floor’. All the songs are accompanied by the videos on a large screen as the Rubberbandits started off on RTE comedy sketch show ‘The Republic Of Telly’ and it just adds to the comedy of the live gig.

The next song is accompanied by the introduction of the memory helmet, a hat with the lyrics suspended off it, thus aiding the wearer to remember the words, and when they launch into ‘The Abortion Song’ –  it’s easy to see why- a wordy lengthy number about not talking about abortion and a crafty way to actually put across a bigger message, it shows the Rubberbandits politically astute side, and is welcomed loudly by the crowd.

Briefly leaving the stage to appear back with a pretty lifelike puppet of the actor Gabriel Byrne, they launch into the inimitable ‘Fellas,‘ a happy little ditty about being gay and proud of it.  It’s full of expletives but a very positive message about being yourself. Why the Gabriel Byrne puppet you ask? Who knows, but its very funny nonetheless. And with that the show appears to be over – leaving the stage momentarily but reappearing to give us a rendition of ‘Horse Outside‘, the song that they are most known for. The crowd go wild, roaring and singing along with every word, in faux Limerick accents, or maybe that’s just me…

Ending the set on ‘Double Dropping Yokes’ is a surprise to many but an inspired choice. With a heavy dirty beat and mentioning Eamonn De Valera its somewhat of a culture clash techno song and the perfect way to end a hilarious gig. Again, I am struck by the music which backs up the song. Mr Chrome and Blindboy are clearly two talented boyos and we all happily oblige when they encourage us to dance along doing our ‘shitest rave moves’. And with that the gig is over.

The Rubberbandits certainly lit up my Saturday night and while not for the faint-hearted or those easily offended, they take a satirical look at Irish life and culture, they put it to some cracking music and they hypnotise audiences wherever they go, leaving them rolling with laughter and singing along. That’s a formidable combination if you ask me. And you know, they’re right, they are ‘gas c*nts’. YURT! 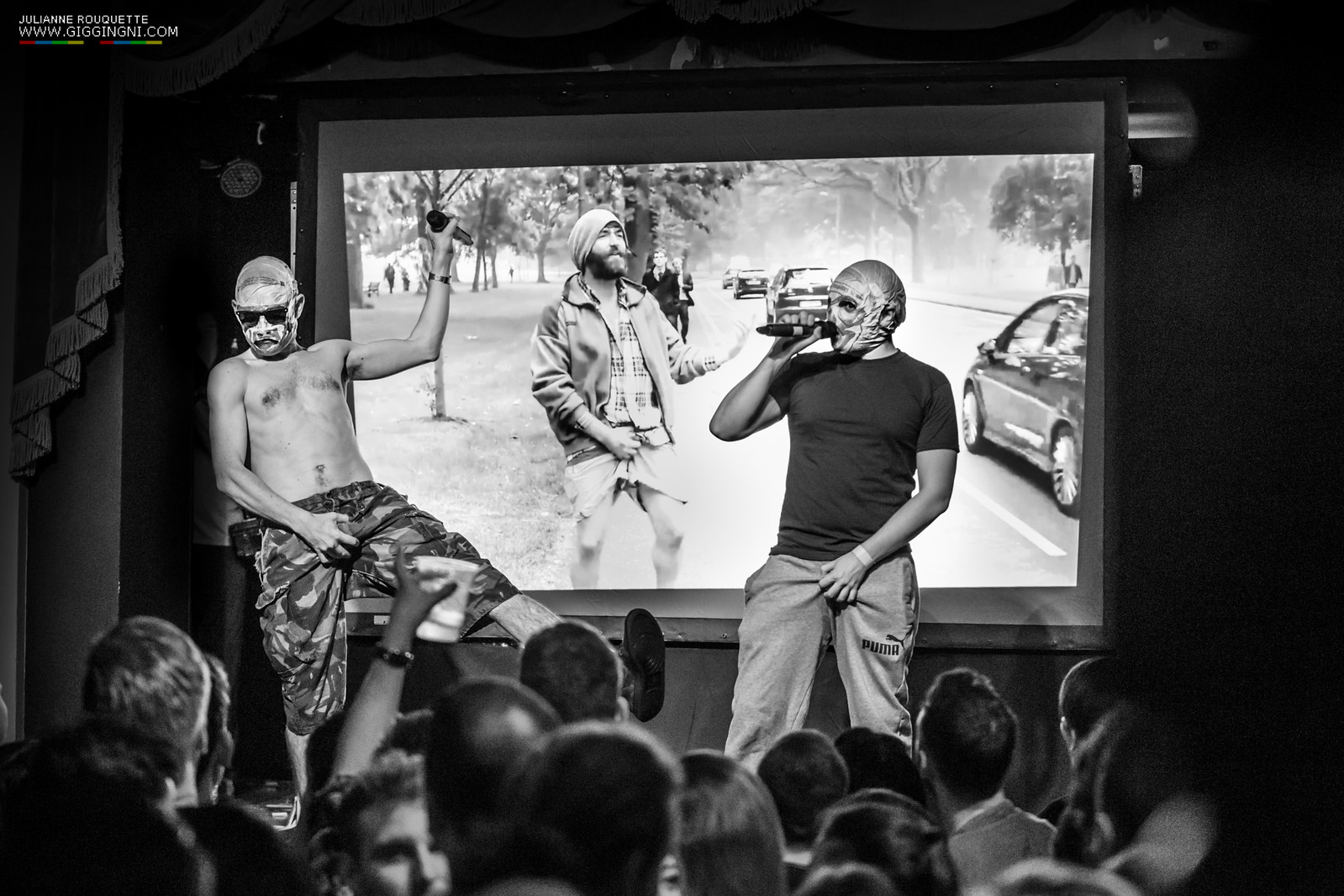