It’s 8 o’clock of a wet and windy Saturday evening in Bangor and a very diverse crowd has packed into a large hand-built canvas Yurt to watch Ulaid and Duke Special perform as part of the Aspects Literary Festival.

This was only the third public outing for this line-up, after playing the Sunflower Bar in Belfast and Derry’s Nerve Centre. Ulaid (John McSherry on pipes/whistle, Donal O’Connor on fiddle and Seán Óg Graham on guitar) have a well-established pedigree when it comes to the Irish trad scene. The three members have contributed to a large number of exciting and ground-breaking bands and projects and released their self-titled album in 2015 to critical acclaim. As for Duke Special, he has been carving out his own eclectic and diverse musical path for the past 20-odd years from producing radio-friendly pop to musical scores for Berthold Brecht plays. I was well aware of both parts of this strange marriage of styles, but the question in my mind was how were they going to mesh together?

The answer was pretty simple – they meshed seamlessly. Early on, Duke Special explained how it was John McSherry’s sister Tiona who had suggested the collaboration over a pint in the Sunflower Bar – if that’s the case then a tip of the hat is required to Tiona McSherry for coming up with an innovative and interesting idea such as this.

The show started with a bit of to-and-fro with Duke playing some of his older tunes (Condition, Digging an Early Grave) alternating with Ulaid playing some more traditional-sounding sets and tunes including Ode To Heaney, a new composition by Donal O’Connor. From here, things moved into what was relatively new territory as we got to hear material from The Belfast Suite, recently written collaboratively by the four band members.

These songs were an altogether different affair and by now you could have heard the proverbial pin drop in the big canvas tent. This music is haunting and atmospheric with lyrics based on stories, poems and letters from the Frances Bigger Collection held in Belfast Central Library and reflecting Belfast in the 18th and 19th Centuries in terms of it’s people, industry and geography.

The sound produced by the four musicians was a revelation. Duke Special was understated at the piano and both his playing and his voice fitted the pieces in a way I hadn’t expected. Seán Óg Graham’s guitar playing was perfectly pitched as both accompaniment and when he took the lead. John McSherry is one of Ireland’s leading pipers and his contribution to the overall sound was perfectly judged; the same can be said of Donal O’Connor’s fiddle playing with McSherry and O’Connor bouncing off each other (musically at least) on some of the numbers to great effect.

The Belfast Suite material ranges from the dark and brooding Shipyards of Belfast to the upbeat and up-tempo Far Set (named after the Farset River). There was even room for the gothic absurdity of the song “On My Dog Fido Who Died From Poison” which, when delivered dead-pan by Duke Special took on it’s own comedic quality. For me, the stand out tune from the Belfast Suite collection was the instrumental set “Little Italy/The Half Bap” which has traces of jazz and European influences while remaining distinctly part of the Belfast Suite.

After rousing and well-deserved applause the lads took to the stage for their encore, a somewhat reworked version of My Lagan Love. O’Connor and McSherry began the tune taking turns with an introduction that contained more that a nod to She Moved Through the Fair before being joined by guitar, piano and the voice of Duke Special. Again, as with much of what have preceded it, this was perfectly judged in terms of content and in style and a fitting way to bring the curtain down.

Outside it was wet, it was windy, and we were in a large canvas yurt but damn it was good from start to finish. This show was part of a relatively short tour with Dublin and Sligo still to come; they’re definitely worth catching if you get the chance; I’m going to be waiting for The Belfast Suite album. Words by Michael Barbour. 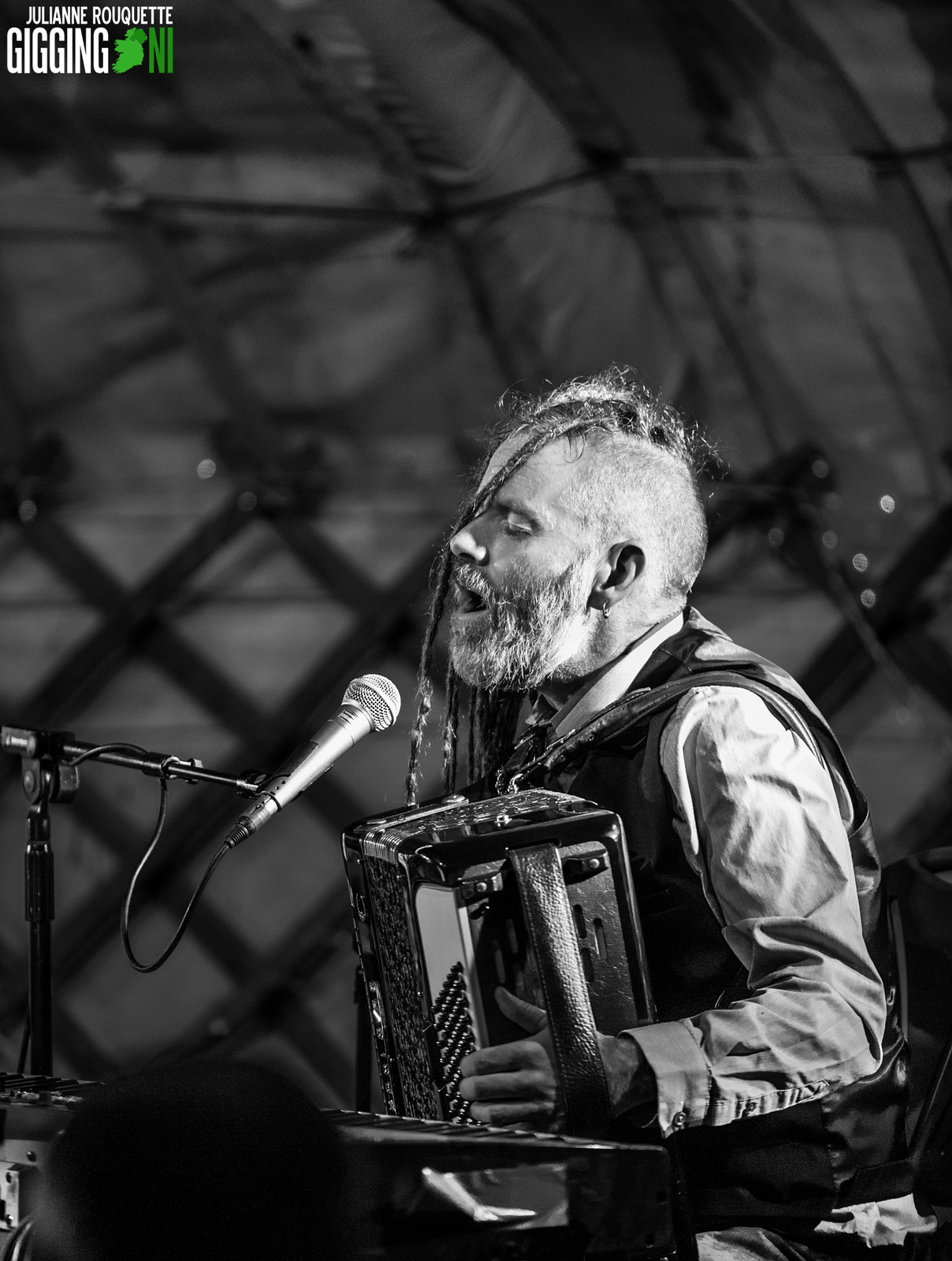