Level 42 at the Waterfront Hall

According to The Hitchhiker’s Guide to the Galaxy, ‘42’ is “the answer to the ultimate question of life, the universe, and everything.”

However, surely the real question is – could a bass player’s thumb really be worth £3million in a 1987 Polydor Records insurance policy? (That’s £7,939,806.00 in today’s money, less in value than Kim Kardashian’s jewels).

Level 42 named themselves after the answer to the Hitchhiker’s ‘ultimate question of life,’ and Mark King’s bass slapping thumb was the heavily insured digit in question. They went on to become a sound synonymous with the 80’s, and on into the 90s. Their funk-jazz-pop singles topped the charts at home and abroad, and more than 30 million albums were sold globally. Fuelled not least by King’s signature slap style bass, and long-time running mate Mike Lindup’s keyboards and falsetto vocals.

Last Saturday, three and a half decades after it all started, they walked onto the darkened stage at Belfast’s Waterfront Hall accompanied by an electronic, almost industrial drone from Lindup’s keys, and the audience’s reaction pretty much answered that £3m question. He’s worth it.

Mark King was among the last to walk on stage. You couldn’t see him in the dark, just that mammoth bass guitar neck, lit up like a small plane was going to land on it. You could hear from the audience that he had arrived though. When the lights went up the stage appeared to be arranged like a tidy desk. The keys to our left, the 3-piece brass section to the rear, a drum kit the size of a semi-detached house to our right. And the show began; covering years of classics, introducing lesser known numbers, bringing us back, way back, then kicking us forward again.

Before the main act though, support came in the form of local artist Amanda Agnew and band, offering a completely different sound for starters. I like that. I like getting to hear music that I might not be expecting, and differently focused support bands is one key way to do it. The honeyed country ballad and mild twang in “Think Of You” for example breathes different air to the synthpop jazz-funk of Level 42. The full-voiced gorgeous “Heartstrings” is emotion straight from the hip with lyrics front of stage and bass in the background. Agnew went on to Vicar Street with the Level 42 crew the following night. A pretty good weekend’s work for a home-growner from Bangor.

There was a bit of nostalgia in the air when Level 42 kicked in. “Micro Kid” showed off King’s voice, that distinctive tenor that became so important to the Level 42 sound. Lindup’s electronic vocals carried right though from that 1983 recording (Standing in the Light) as he stood at the mic and digitally altered his voice for the song, this time drifting from bebop to scat. Then a sireny whine sprang from the brass section, who were assigned to a platform of their own on the stage behind King and Co. And as the saxophone started one of several funk-based slow burn spectacles, the mad enormous drums kept beating their way through to the crowd, kept the path clear.

“In my mind I’m 23,” king told us. “More like 23 stone,” he laughed, then he raised his pointed finger to his head, “but 23 in my mind.” He was one of us. The generally older crowd who had been there to enjoy their chart success in the 80’s was lapping up the decent bloke talking to us from the stage. “If you want to get up and have a boogie be my guest …” And lo, as he introduced the title track of ‘85’s World Machine, and Lindup’s keys rolled in the percussion from King smacking that bass, two ladies from the end of the row in front of me slipped out of their chairs and took him at his word. Front of stage had two more women breaking the seal, and as the song progressed a steady stream of revellers followed them up for a dance, with pretty much all of them staying there for the rest of night from what I saw.

Newer songs were played, but needless to say the night was chockfull with songs from the heady days of Space Invaders, Thatcher, and the introduction of compact discs. “Sun Goes Down” (“Livin It Up”) brought on simultaneous arm waving that spread from the dancers back to the people in seats. The three boys in the brass section continued having a ball, like they had all night, dancing, jumping, synchronised stuff. King was bending the notes as he slapped them, and spaced robot keys bounced across it from Lindup while rocked-up riffs cut through from the guitar. Absolute cracker.

Unsurprisingly, “Lessons in Love” became enormous. The drumming seemed relentless; indeed throughout the gig the drummer seemed relentless to be honest. At one point in the song, the brass section left their platform and travelled round the stage, like a Disney carnival in New Orleans. Trombone, trumpet and sax were played and shown-off as they lurched and spun, walked backwards, played with one hand. As they passed the guitarist he joined the caravan. King slapped and funked and sang in his nasally best, Lindup’s keys and falsetto ensured we were given the real deal. At the end, King put effort into shaking hands from the low stage with the people who’d been dancing in front of him.

Another highlight was “Starchild” which had Lindup on main vocals, coming out from behind the keys to bounce round the stage swiping at cymbals while the brass boys were doing a 2016 casual Drifters synced thing. And when they walked off stage and we were cheering for them to come back on, the man beside me said “but what will they do? They’ve done them all.” Then the fanfare from “Heaven In My Hands” broke out and he nodded at me knowingly.”

For years Mark King has wrapped his £3m thumb with electrical tape to stop it from splitting, due to the pressure that his style of playing places on it. As in usual form, I saw him give the tape away to a fan. The tape wrapped around the thumb that had slapped and strummed and funked and grooved the Waterfront all night. Looks like emerald green was the colour of choice this time. Photos: Tremaine Gregg, Words: Cara Gibney

(Here’s a shout out to wee brother for the Level 42 geekery and set list he so kindly furnished me with.) 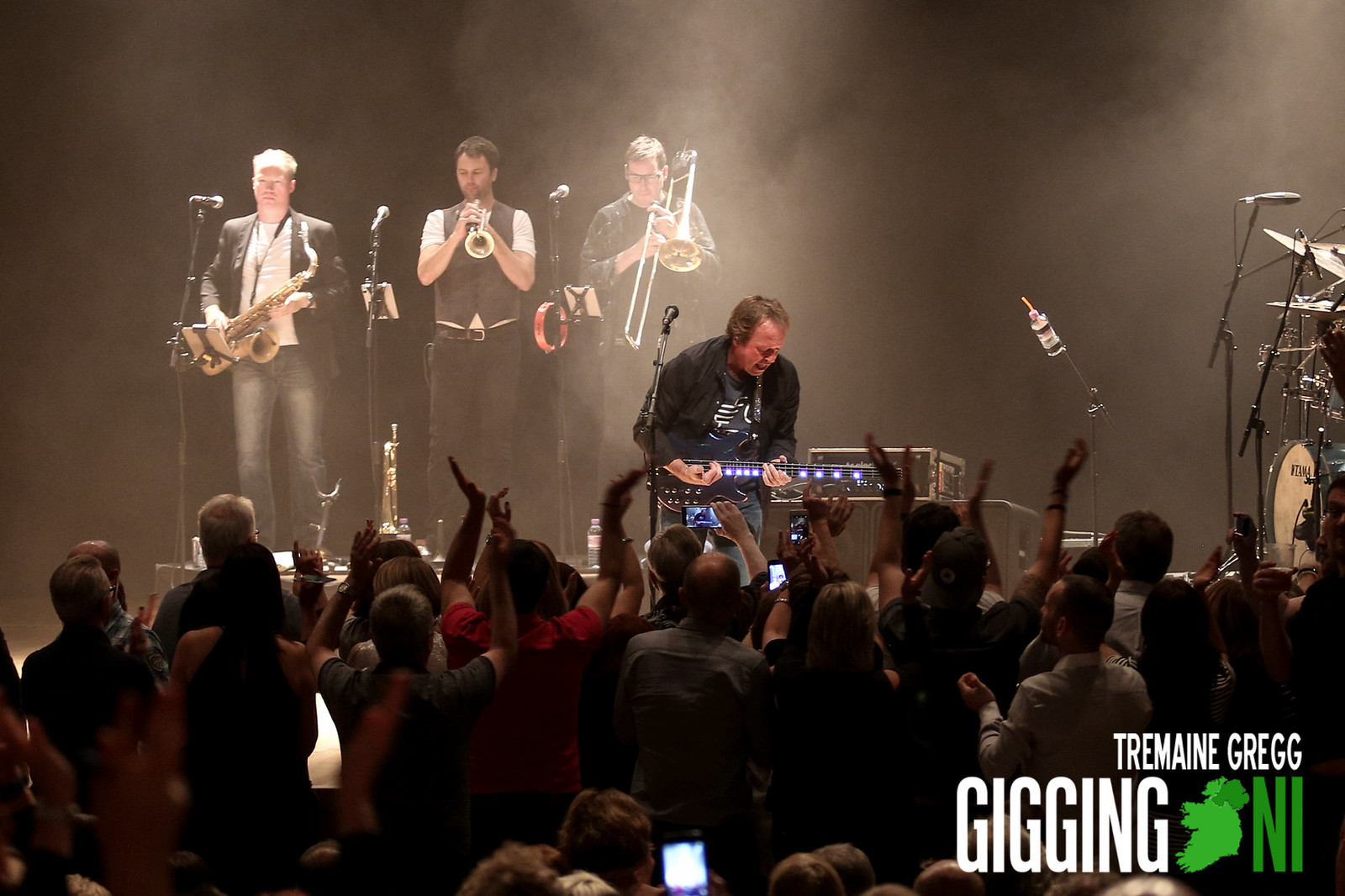