Uriah Heep kicked off the night in the usual rocking fashion they have come accustomed to over the years. The veterans provided a perfect beginning to the night. Normally the support act is faced with a half empty crowd, sober unwilling faces and strange looks firing their way as if to say, ‘who the hell are you?’. But not last night, the group were instead faced with their own set of fans among the Quo faithful. They sung back the lyrics, jumped, head-banged and danced with the band from start to finish as if it was their very own concert.

With amps turned up to eleven they pumped the crowd up into a frenzy, playing some of their classics such as ‘Gypsy’, ‘Look at Yourself’ and ‘The Wizard’. A powerful set that placed the bar at a very high level for the rest of the nights music. A bar many rock bands may not be able to live up too in terms of mixing energy with quality of playing…however it was no normal band that was coming up next.

Status Quo came on to thunderous applause in the packed out SSE Arena. Although a dampener was put on the night a little bit with the unfortunate absence of Rick Parfitt, the night did not suffer from it. It was a rock n roll extravaganza, solo packed, masterclass of a concert, worthy of putting any new young band to shame that complain about the physical struggles of live concerts on tour. Non stop movement, non stop energy from all corners of the stage, non stop momentum blasting through hit after hit of their extensive back catalogue of classics. Everything you would expect from a Status Quo Concert.

The night was jam-packed with hit after hit, solo after solo, and not just the guitar kind, as around the middle of the show the band all gave way to allow drummer Leon Cave make as much noise as possible with an incredible solo of his own.

A noticeable contagion spread around the crowd like wildfire all through the night. What contagion you ask? The type you only find at concerts with mega rock n roll hits ringing out one after another…sporadic and uncontrollable air guitaring. It was breaking out all around the place, men and women in the crowd unable to control it anymore, bursting with the type of excitement and nostalgia that comes from the distinctive sound of Status Quo’s boogie rock. They mimicked the Quo’s dueling guitars with friends and soloed along to every song, strumming their air strings with as much enthusiasm as their heroes on stage.

When the inevitable time came for ‘Rocking All Over the World‘ to enter the fray, the crowd, already whipped up into a frenzy after being treated to an immense night of hits already, went insane. Anyone in seats stood, not one person was still, everyone danced, jumped, bounced, done whatever they could and moved whatever way possible, infected with the music and enjoying the moment.

Real highlights of the set came from the obvious hits such as ‘Caroline’, ‘Down Down’ and ‘Whatever you Want’. Although to pick a favorite moment would be nearly impossible, as although I call them highlights, the entire set was one of pure music magic. A masterclass in every sense of the word, and a concert I’m sure anyone who was there will never forget. 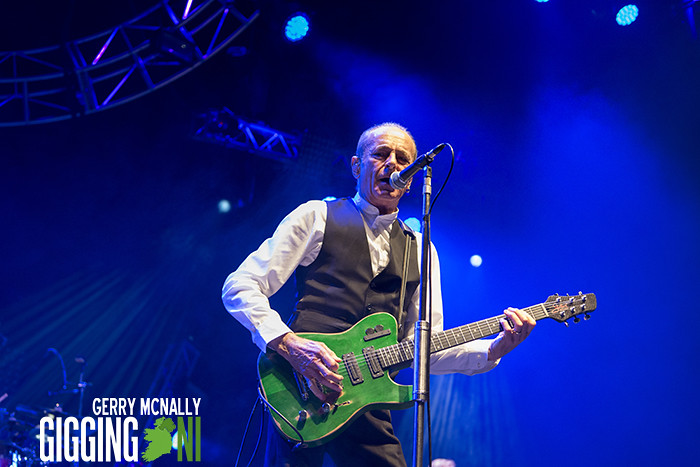