We Are Scientists – Limelight 2, Belfast

The speaker volume and charm offensive has been cranked up to 11. Tonight, We Are Scientists are playing to a hot, sweaty and near sold out Limelight 2. Before they do, I have the pleasure of sitting down with Keith Murray, lead vocalist and guitarist.

Murray enters the room with a beaming smile and hands me a beer. Good start. We Are Scientists are touring their new album, Helter Seltzer. Murray discusses their sixth studio album with enthusiasm. ‘We are paying more attention to song craft than the first album, it’s a progression’. We are trying to move away from dance beat ideas but they do come back in, we are more concerned with craft and less concerned with drive’.

At the stage, the band emerges from the darkness to Lionel Ritchie’s “Hello”. The audience know what to expect as they sing it back to the band but falter out at some of the lyrics and then laugh to themselves. The band then breakout in their first track of the night, “The Scene Is Dead”. Murray bounces around the stage with the same energy and enthusiasm that he first did over 10 years ago, impressive.

As we continue to talk about the new album, I note the nervous excitement, energy and anticipation I feel when listening to it. Murray expands, ‘A lot of the album is about the first 3 weeks of a relationship, the unsure part. Most of the record is about that nothing is assured, not being able to read the other person and not being presumptuous in trying to read them. This album is about a new relationship coming from the direct perspective of the previous album TV en Francais with it being about post break up and after having spent a lot of alone time in New York City’.

Back on stage, the band mix newer and older material. The second track played tonight is “Buckle” a song from the new album but going by the audience’s reaction, you wouldn’t know.

The biggest cheer from the audience so far tonight is saved for the intro to the indie dance floor favourite, “It’s A Hit”. By this point the audience are well and truly warmed up.

Between hit records and fan favourites, Murray and Cain take a chance to talk to the audience and have a laugh on stage. I asked Murray if this is a conscious decision to have this as part of the act and how much is planned or scripted. ‘We have been touring and bantering on stage for so long that if don’t make the effort to, people will think we are in a bad mood. Although what we talk about is never planned and it’s a fun part of our set where none of us know what is going to happen and that way it makes it interesting for us. It’s a spontaneous part of show; it breathes life into it and allows us to make a connection to the audience. Our aim of it is to make it more personal’.

By the time the band are on their sixth song things do get a lot more personal. To the backdrop of the piercing sound of “Textbook” Murray jumps down off stage and through the crowd. After struggling to jump a fairly high bollard, he finds himself on the lap of a woman and continues to serenade her, again much to the delight of the crowd. Murray continues to struggle this time with the length of the mic cable which doesn’t allow him to reach the bar. Nevertheless he continues through the crowd stop to sing and of course for an obligatory selfie.

The tongue in cheek comedy coupled with the fact they don’t seem to take themselves too seriously onstage as well as a bagful of hits and sing-alongs means these guys are hard not to like. Off stage, Murray discusses the music and the song writing with intensity and passion. ‘The process for song writing changes a little bit from album to album. This album was a little more segmented in terms of creative moments involving me doing prep work by writing about 30 songs before giving them to Chris and Max [producer[ telling them to pick the ones they wanted to work on’.

On the topic of recording, Murray talks of his dislike for it. ‘We emptied a recording space in Brooklyn and went in there and over the course of 3 months. We tend to be a band that have the songs and go into the studio and try to record as quickly as possible. We tend to not enjoy recording. I tend to enjoy the writing the most with performing a close second’.

Looking ahead, Murray mentions that he will be sad to come off tour. In 2017 he plans to write and possibly record more material. ‘I’ve written a bunch of stuff before the tour and on our break soon I plan to write more as I haven’t written in 6 months. I can’t write on tour as there is no space to do so’.

I asked Murray about the seemingly fall to the wayside that a lot of the bands that emerged at the same time as them and why they seem to be flourishing. ‘It seems like a personal choice for some bands, that is our take, if we stopped liking doing this then we would stop. Chris and I hang out in NYC when we aren’t working. To say what we do is work is funny. We make the tour liveable for us’.

With the inenvitable encore, We Are Scientists did not disappoint. Continuing their musings, Murray tells the audience they are now a bit tired and need some help. Up to the stage steps our very own Nathan Connolly of Snow Patrol. Connolly plays with the band for the track, “Dumb Luck”.

Sensing the band may have one last trick up their sleeve, the audience grows quieter in anticipation. For the last two tracks of the night, another local boy is given a rapturous welcome to the stage, step forth Tim Wheeler, lead vocalist of Ash. Wheeler joins in on guitar and vocals for “After Hours” before finally ending up on a cover of Weezers “Undone”. As the audience dispersed for the evening there was the sense that this show was pretty special, both to them and the band. 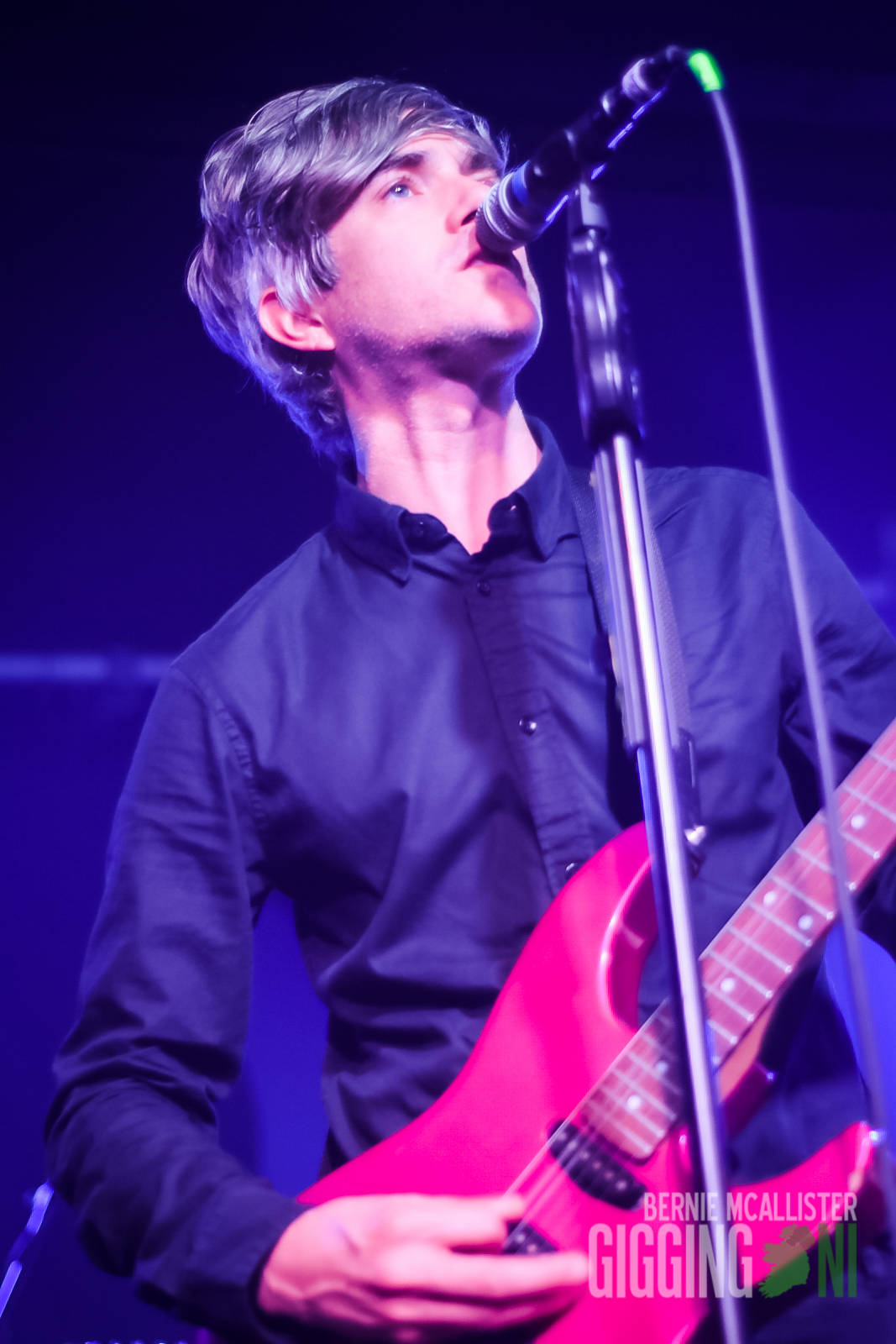