Last night saw rock veterans Jimmy Eat World return to Belfast to play a sold out show at Limelight 1. After taking a year out and returning to produce their latest album Integrity Blues (released 21st October), the band took to the stage and dipped into their extensive repertoire, performing a set that stretched through the 20 years they have been a collective.

The early show time didn’t deter the crowd from arriving in time to catch support band The Amazons, a four piece English rock collective from Reading. The band formed in 2014 and have steadily gained a large following through playing the festival circuit and supporting bands such as The Kooks.

Performing a short but impressive set, The Amazons got a great reception from the crowd. The band’s sound could be described as anthemic rock – loud, yet melodic, with catchy guitar riffs and a deafening drum beat that commanded the attention of the entire venue. Finishing with single “Junk Food Forever,” the band left the stage to a rapturous applause. It’s fair to say The Amazons left a lasting impression, and successfully recruited a few more members to their ever expanding tribe.

Jimmy Eat World entered the stage to the opening chords of “You With Me”, taken from their latest album Integrity Blues. This was the beginning of an eclectic set, comprising of both old fan favourites and newer material. Time was very much of the essence, with the band launching straight into “Big Casino”, before frontman Jim Adkins addressed the crowd stating, “It’s so good to be back!”

There’s an element of effortlessness when watching Jimmy Eat World perform – a by-product of experience paired with their obvious talent as a collective. Every aspect of their performance was faultless, with Adkins’ vocals sounding exactly as they did 20 years ago.

After performing “I Will Steal You Back,” Adkins took a moment to reflect on the band’s success over the years – “You have a self aware moment and realise that, wait a minute, I’ve been making music for 20 years now.” Clearly appreciative of his fans, he stated “You guys make it all possible, so thank you!”

Whilst Jimmy Eat World are known for being one of the most consistent and reliable rock bands out there as far as releases go, the excitement that resonated from the crowd when exposed to the band’s older hits was something special. The familiar intro to “Bleed American” sent everyone into a nostalgia fuelled frenzy, evoking memories of 2001 and the Emo genre the band helped to popularise. That being said, another highlight of the show was “Pass the Baby”, a song taken from Integrity Blues. The track starts slow and gradually builds to an explosive hard rock climax, the reaction of the crowd a testament to the fact that Jimmy Eat World will never get complacent or lazy with their work.

Finishing their main set with “Pain”, the band was met with the familiar chant of “One more tune!” before returning to the stage and performing their remaining hits. The familiar intro to “The Middle” resounded to a roaring response from the crowd, every single one of us chanting along to the now infamous lyrics. The band then chose to follow this with mid-tempo track “Sure and Certain”, the latest single taken from Integrity Blues, before hyping up the crowd again with the anthemic “Sweetness” to finish.

The problem for bands such as Jimmy Eat World is that their repertoire is so expansive it’s impossible to please everyone when selecting which songs to play live. It would have been easy for the band to rely or bank on their older material, but what they delivered was a perfect round up of their 23 years together so far. They may have left out a few favourites, but nobody was complaining.

Scroll through our photo gallery below by Sammie Quinn: 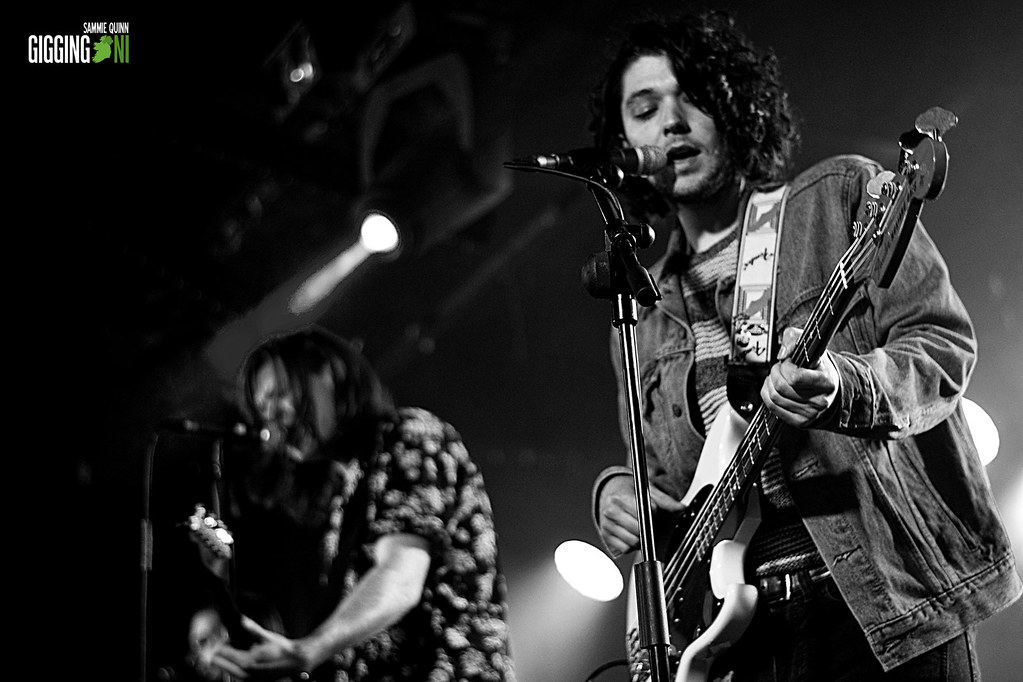