Loudon Wainwright III brought his dry, droll ways to Belfast for the first time in nine years if I’ve counted it up right.

He’s nearly at the end of an Ireland and UK tour that’s been running since mid-October. But let’s face it; the fella’s been singer-song writing-jibing-laughing-commenting and making us think since the 1960’s. What’s another transatlantic tour to him? He’s only 70.

Open House Festival brought him over this time, but before he performed in front of us at the Mandela Hall though, a strange thing happened. My maths teacher from a million years ago walked on stage. Replete with blazer, brown cords, spectacles and strange arm movements, Chaim Tannenbaum turned out to be Wainwright’s support act and not Mr Glenn after all. What a relief.

The awkward maths teacher vibe was fuelled by the fact that his mic stopped working, with an audible pop, on first site of him on stage, and then a sound tech scrambled up to fix it. The world would be banjaxed without sound techs.

Then he started singing and things altered somewhat. It was the American folk song “Dink’s Song” that he started with. A lonesome heart-longing number – “Round my heart I felt a pain/Fare thee well, Oh Honey, fare thee well.” His voice was clear, the “Fare thee well” was high and held long. With his guitar and his harmonica on a rack round his neck, there were echoes of two previous singer-song-writing visitors to Belfast, Jonah Tolchin and Vikesh Kapoor. There were echoes of slave spiritual. There were long shadows of all those folk revival performers. It was a quiet seated audience in the room, so he didn’t stop us in our tracks, but he stopped us shuffling in our seats or whispering to our compatriots.

He’s an impressive through-the-teeth whistler and a fine song writer too. Prime example was “London, Longing for Home” which he described as “an insolently long song.” He was right. It was long, and it wasn’t easy. The words however, they were art itself. “Gay, handsome faces, rounding their mouths over tea” he sang. I was quite blown away by that dirge of a song.

Mr Tannenbaum turned out to be a dry, clever, wordy, funny bollocks. On bringing up the American elections he told us “it is without a tincture of smugness that I say I am Canadian.” And during his struggle to remove his harp rack he commented on his difficulties by acknowledging Bob Dylan’s Nobel success. “I don’t know how he does it” he said twisting his neck to squeeze off the rack. “No wonder he won the Prize.”

When Loudon Wainwright III walked on stage there were no introductions needed; he just launched into his first number “The Man Who Couldn’t Cry.” The audience knew it, knew what was coming up next, soaked it up from the first drop. “Lost his arm in the war/was laughed at by a whore/Ah, but still not a sniffle or sob” smiled Wainwright from the stage; holding lines in the air to stretch the point. Holding his face towards the ceiling with a pained look and his mouth open. Holding us in anticipation of his next word.

“I’m Alright” was proof positive of how his voice seems to have avoided the worst vagaries of time. For sure it sounded older than it would have in the 80’s, but it was strong and carried his dry humour with no cracks or scratches. Chaim Tannenbaum had told us that Wainwright had celebrated his 70th birthday in the not too distant past, and it seemed his voice was giving the lie to that.

A thread running through the show was the “posthumous collaboration” he was having with his dad who had been a writer and editor for Life magazine. At various points on the night, Wainwright recited extracts from his father’s ‘The View From Here’ column, but these weren’t simply read or narrated, they were performed. Wainwright is an actor too; he studied the craft and has appeared in various films and TV shows over the years. His father’s words had been learnt as actor’s lines. Emotional memory was recalled, the text had been analysed and the pauses and body language managed to reach right out and connect with all of us in the room. At one point he was seated on a chair near the back of the stage, then he wandered from left, to mic stand, to far right, then back to the chair, explaining the story, drawing out the meaning. He and his dad were working well as a team this night.

He gave us old favourites. There was “Be Careful, There’s a Baby in the House” from 1971’s Album II, and “Dead Skunk” had him urging a happy audience to clap, which led to some spontaneous sing-alonging. And through audience request he gifted us with a spontaneous version of “Colours”, a song about dog shit. You can trust a Belfast audience to stay classy. “What an arcane request” he had laughed when he sussed what he had been asked for. It was funny though.

Tannenbaum joined him on stage a couple of times through the night, and they bounced well off each other. Unsurprisingly it came to pass they have known each other for 40 or 50 years. They obviously know how the other works. “I think you people want to go swimming” he shouted above the applause as the pair played the opening bars to “The Swimming Song.” The harmonies were easy and tight at the same time; they knew each other’s corners. “The Old Dope Peddler” melodically swiped us to an era of Hoagy Carmichael, and lyrically pulled us back to right now.

Superb last song of the night was an a capella offering of “Paddy Doyle’s Boots” in which the pair yelled with their eyes closed, raised their fists to “We’ll all drink whiskey and gin,” and ended on “we’ll all shave under the chin” while waving their guitar and banjo by the neck. It was a funny, raw, high-spirited end to the night, and with a quick “thank you, goodnight” they were gone. The room started to empty. It was time to go home. 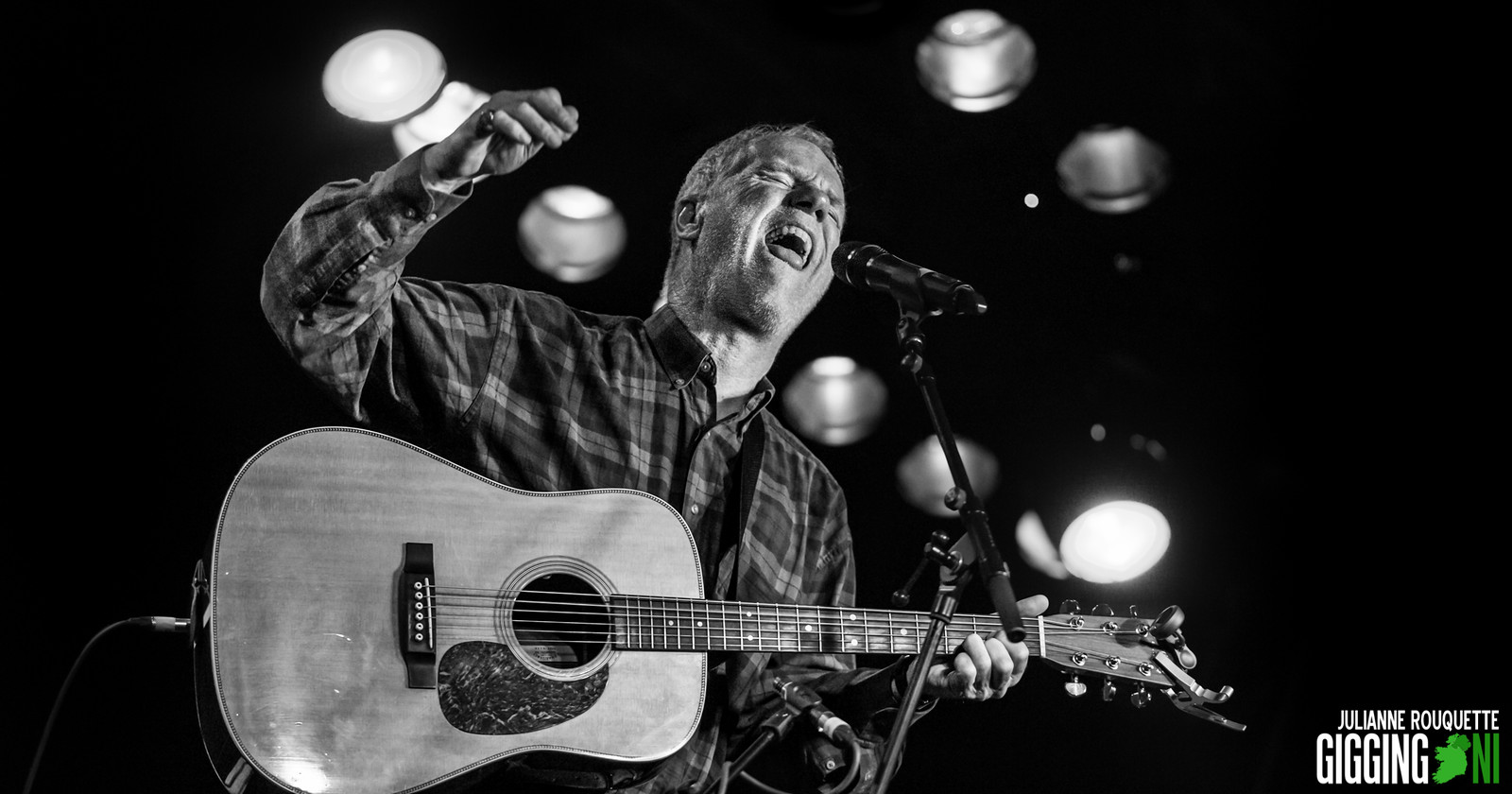