Between wishing I had some form of Celtic memorabilia to chuck at Rod Stewart and wondering if I should don a silver glitter dinner jacket teamed with a tartan scarf in homage to the King that was Rod Stewart I decided nothing could prepare me for this night.

Opening to the jam packed and eagerly awaiting crowd which filled the SSE Arena were Ruby Stewart and Alyssa Bonagura of The Sisterhood. After being encouraged by band member Ruby’s father Rod to start a band, the duo have quickly been captivating attention all across the globe. The two girls preformed their first EP that they have written and recorded and it became easy whilst listening to the duo to forget that we were in fact there to see Rod. From the girls dreamy vocals to their floaty glitter outfits (inspiration taken from Rod I’m assuming) it would have been hard to find a better act to open for the night ahead of us.

As a black and white curtain descended around the stage the anticipation grew and then it was time. There it was. The gold harp, the Celtic badge drums, the gold sparkly Gatsby dresses on the backing singers. Then at last, the gold jacket. The gold jacket draped around one of the kings of music that is Sir Rod Stewart. It was at exactly this moment that I questioned if I was ever going to be able to breathe properly again.

Opening with “Soul Finger” I couldn’t decide what I was enjoying more, the song or everyone throwing their arms about at ten past eight on a Monday night.

Every time those hips shook and that gold jacket sparkled it took all my might not to push my way out of row P and throw myself over the barrier and up onto the stage to ask Rod to swing me about up there with him.

Taking time to speak to his adoring fans Rod gives a quick itinerary of the night; “About two hours to give everything and I know it’s a Monday night but let’s pretend it’s a Saturday night.” With that said no more instructions were needed to be given to the crowd, who seemed all too ready to pretend that it was a Saturday night.

Beginning the concert with a flurry of classics including “Forever Young” and “Handbags and Gladrags” Rod explained to the cheering crowd that any missed notes were due to the shouting he was doing the previous day whilst watching his son play football. Before throwing himself into “Can’t Stop Me Now” he took time to dedicate it to his old man, who always told him to keep going when he was rejected by everyone when he first started. This piece of information shared with the audience made it clear that his father’s encouragement has transpired through Rod in encouraging his own children now to keep going with their music and football aspirations.

Any time Rod left the stage (because what’s a Rod Stewart concert without a few flashy outfit changes) as much as I sat in anticipation for his return the rest of the stage did a good job maintaining the atmosphere that Rod had created. The backing signers launched themselves into a cover of Tina Turner’s “I Had A Ragdoll” whilst Rod took himself off stage and they fairly kept the crowd going which was a good job because when Rod made his return on stage he had an announcement to make; “We’re going to have some fun now.”

This was it. It was time. All the ones I, like many others had been dreaming off. It was time for the real classics. I never understood how people cried at concerts and never thought I would but when I looked ahead and seen 71 year old Rod Stewart swinging himself about the stage singing “Maggie May”, a girl no more than 8 waving a giant foam finger about her head and several grown men standing alone hurling their arms around their heads I now understood.

Next up was “Sailing” and whilst Rod launched through the classics he decided what’s a Rod Stewart concert without a few footballs kicked out to the crowd. This was it – this was my time. Row P was the perfect position for this and I took to my feet to wave my hands and get his attention (yes I really thought this would distinguish me from the crowd). It must have worked because Rod was singing; a football left his foot and was coming straight at me. This was it. It was happening. I was going to catch the ball that Sir Rod Stewart had touched. It was as if time stood still in those few precious seconds when I thought my whole life was falling together, the ball was touching my hand, I was going to catch it! Or so I thought until it kept brushing past my hand and was grabbed by the woman two seats beside me… never mind, I touched a football Rod Stewart kicked out, I now had a connection with him.

Of course, what’s a Rod Stewart concert without ending the night with “Do You Think I’m Sexy” and “Enjoy Yourself” with hundreds of balloons dropping from the roof enveloping all of the tartan wearing super fans of the night. Not wanting to accept that the night was over I sat firmly on my seat whilst everyone around me clutched onto their concert memorabilia of footballs and balloons. After ten minutes of the people sitting around me having to squeeze past my stubborn body I had to accept that the night was over and my time was Rod had came to a close. 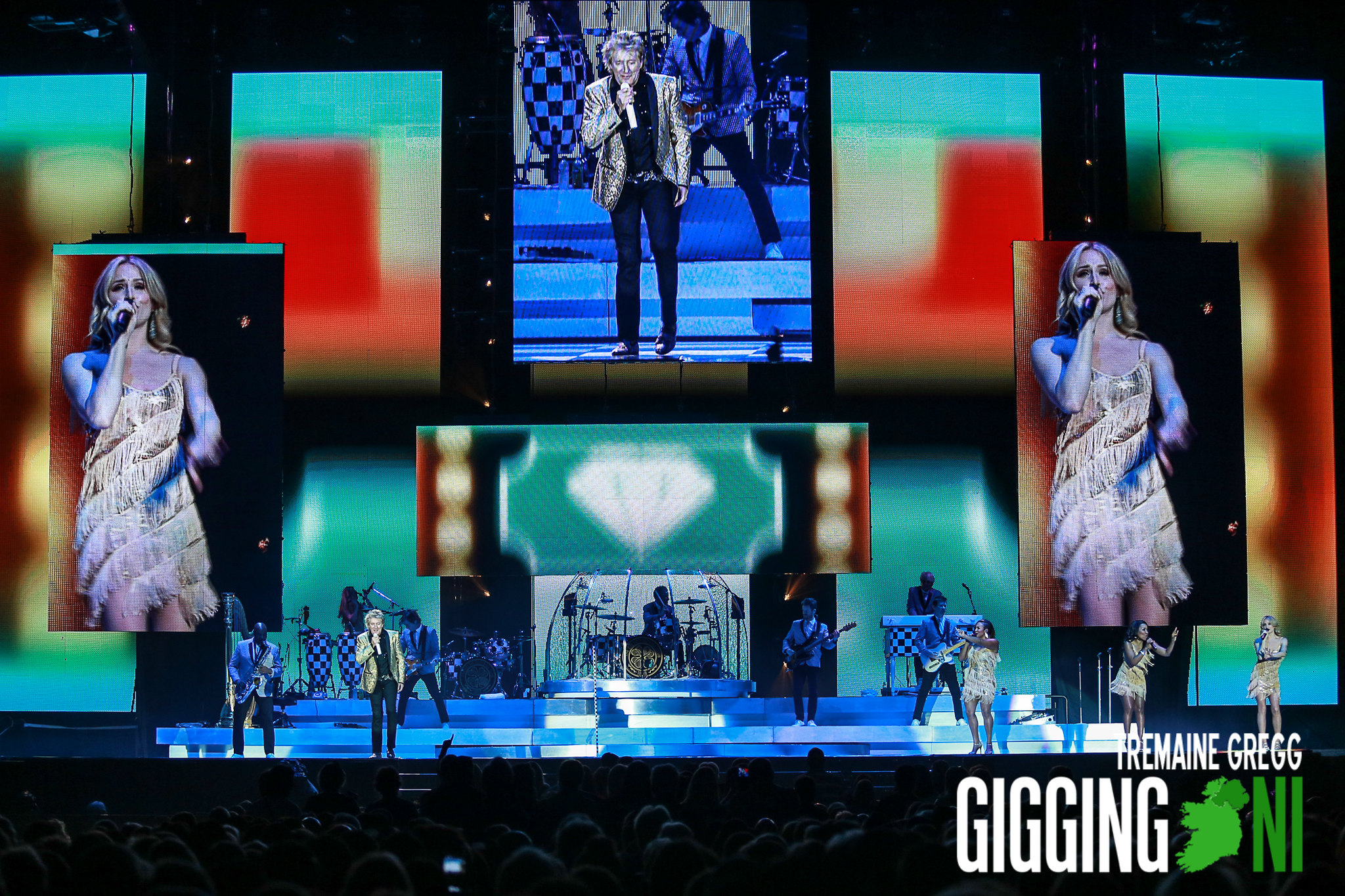