The 4 of Us – Lyric Theatre, Belfast

Way back in the late 1980’s and early 1990’s The 4 of Us were massive, playing stadiums and topping the charts. Jump forward to 2016 and brothers Brendan Murphy (vocals) and Declan Murphy (guitar) remain one of the hardest-working acts in Irish music. It may have been 10 years since their last studio album (Fingerprints in 2006) but the band are never off the road, touring venues big and small all over Ireland. In between touring, the band have written and recorded their new album, Sugar Island and on Sunday evening we were treated to the new material at a sold-out Lyric Theatre, Belfast as part of a 12-date tour.

There was something surreal about seeing the two brothers performing their music on a skeletal house/stage set designed for a production of Three Sisters by Anton Chekov but the upside to The Lyric is that the sound is wonderful – warm, clear, crisp and nicely balanced.

If you’ve never seen Brendan and Declan playing live as a duo, you’ve missed a trick. Brendan is the smooth raconteur, telling tales and jokes that draw the audience in with a laid back style that reminds me of the greatly missed Gerry Anderson. And boy, can he sing.

Declan is the quiet one and gets on with the job of playing guitar in a hyper-kinetic and at times slightly manic way, throwing in wild mixtures of styles and rhythms. There’s also the homemade stomp-box of plywood/carpet/towel which gets a fair old workout throughout their set courtesy of Declan’s left foot.

Two of the first four songs are from the new album – the bluesy and rhythmical “Birds Eye View” and the rather lovely and radio-friendly title track, “Sugar Island.” This sets the tone for the first half of the show; we get served up a very well-considered mix of oldies from their previous albums interspersed with new tracks. The 1970’s style funk of “Sensual Thing” is followed in quick succession by the stripped-down and atmospheric “Gospel Choir” and then the pure pop delight that is “Maybe It’s You.”

The new songs are introduced with tales of growing up in Newry in the 1970’s and the new album has veins of autobiography and nostalgia running throughout the tracks. Tales of 8 track tape decks (“Just a Drop”) and army check points on the border (“Going South”) tee up the new material. Somewhere in here we also get treated to “Into Your Arms,” a simple, delicate and timeless love song from the last album.

Surprisingly given the back catalogue available, we head to the break with a pair of covers, the wonderfully incongruous Sound of the Underground (Girls Aloud) and 16 Tons (Tennessee Ernie Ford).

A glass of wine later and Brendan tells us that the second half will be more up-tempo and we get some more new songs from Sugar Island, of which “73” stands out for me. Four songs in and the brothers unleash their secret weapon – Declan (who hasn’t spoken one word thus far) takes the lead vocals on the old classic “Working in a Coal Mine” and brings the house down.

In August, The 4 of Us performed at the BBC’s Across the Line 30th birthday bash and they chose to perform “Walk With Me” in tribute to Henry McCullough and it was beautiful. It was just as beautiful to hear it again tonight. Tribute is also paid to Bap Kennedy with Brendan and Declan dedicating a soaring version of the Beatle’s “Blackbird” to his memory.

After this, Brendan starts to get playful with the audience, and he knows how to milk a running joke. Out of nowhere we are suddenly presented with the band’s biggest hit “Mary” – the crowd goes wild and it’s sing-a-long time, with Brendan getting the crowd working on the chorus and then providing the counterpoint and harmony. The lads leave the stage to a standing ovation, returning to do two songs, the slower and folky “Washington Down” from their first album and the raucous “Traffic Jam” which has the crowd on their feet and dancing.

A finely tuned and flawless show from two accomplished performers who are perfectly in tune with each other. Great songs from the back catalogue and a new album that is well-worth listening to; I catch Belfast, Newry and Dublin accents on the way out of the Lyric and everyone is leaving happy.

Sure, where would you get it?

Scroll through our full photo gallery by Julianne Rouquette: 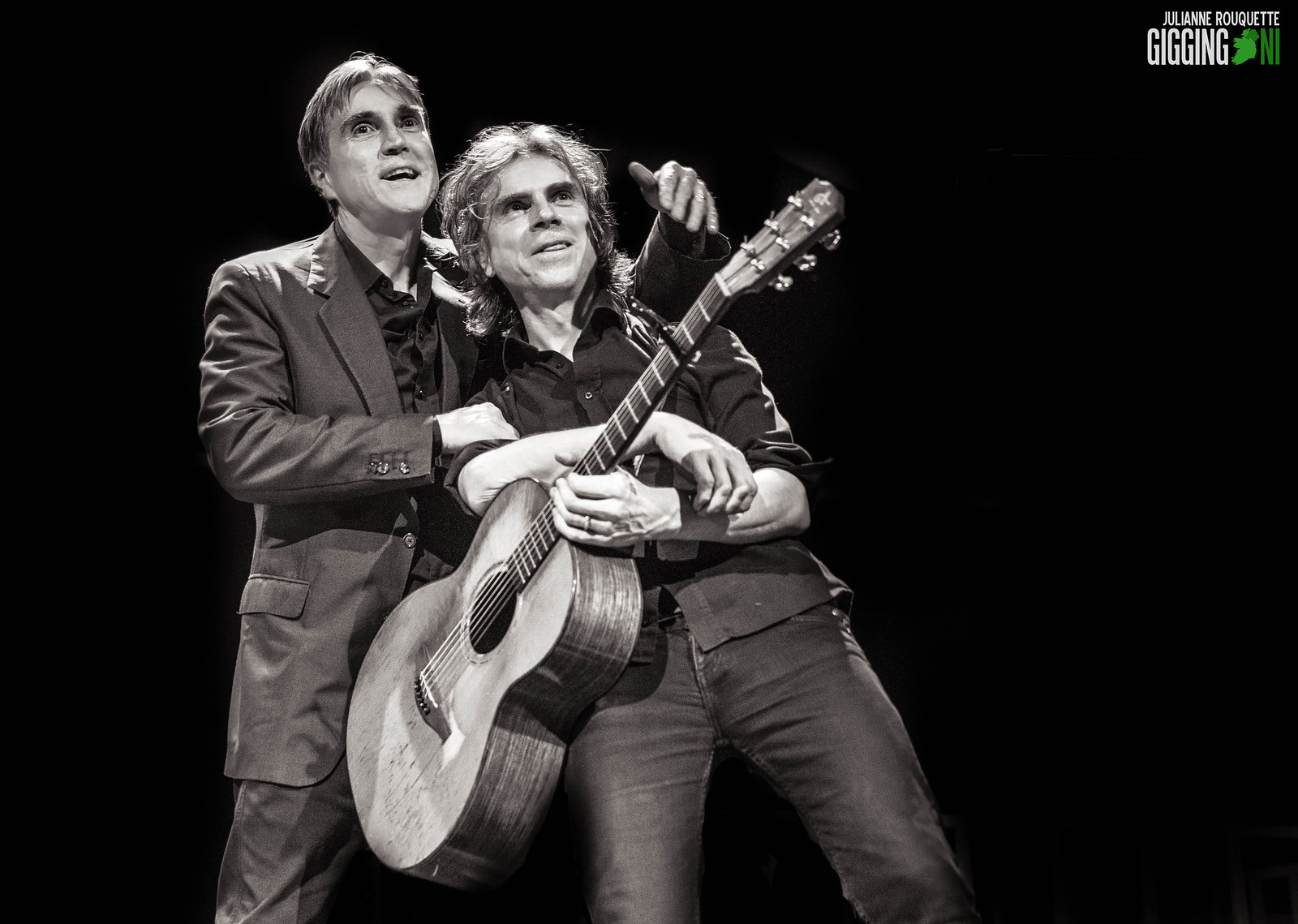 Tags:
Belfast review, lyric theatre, the 4 of us
Share:

The Comprehensive History of The 4 of Us