Declan O’Rourke, The Strings, And The Horsebreaker

Galileo. I know a couple who had Declan O’Rourke’s “Galileo (Someone Like You)” as their wedding song a long time ago. Their mortification at having to take part in the wedding dance ritual was usurped by one of the most romantic, beautiful and graciously unsweet songs I had heard before. It was otherworldly, quixotic, and vaguely dry; sung long and effortlessly with occasional bottomless notes holding up a whole night sky for the evening to proceed.

I remember when I asked at the table who was singing I was told it was Robbie Williams -“Sure doesn’t he sing all the wedding songs?” In the end though it didn’t take long to trace the owner of that voice. It was Declan O’Rourke singing the first single from his debut album Since Kyabram. It did however take a long time to see the Irish singer song writer perform live, and not through lack of opportunity as he is no stranger to this part of the island. I eventually managed on a chilly December night in Belfast as he played the Black Box to a packed out reverential crowd who knew his words, his music, his droll chat.

I think there were seven of them on stage – he’d brought his orchestra for this the first night of his tour. In October past he brought out In Full Colour, his “new old album” of previously released songs accompanied by the 50-piece RTÉ Concert Orchestra. This show in Belfast gave us a taste of that sound. Just a taste, but enhanced by the live room and the real people on stage.

They started with the lightest of string intros to “Her Silken Brown Hair,” a famine song, the story of a man grieving his wife-to-be. She like many could not be buried on consecrated ground because people were dying in such vast numbers there basically wasn’t the room. Instead, they were covered simply in stones, which left space between the rocks for the living to catch glimpses of their clothes, or their hair.

O’Rourke closed his eyes and started strumming his guitar lightly and urgently. The noise was a complete picture of hair drifting in the wind. He kept his eyes shut for pretty much the duration of his singing. The words telling of their love, and her death. “Her silken brown hair” repeated continually as the guitar unremittingly blew it through the breeze. The occasional word dropping in tone like a heavy dark bell. The strings creating a backdrop for the drama and the heartache.

“That was nearly a whole gig” he grinned at us after this long first number; and in so many ways it illustrated exactly what was to come. The way he used his voice to haunt, and climb stairs, and drop stones into abandoned wells. The way his guitar wasn’t just music, it projected images and lit up words that were writ short in line, and sung long. The orchestra padding out all that O’Rourke was creating, putting flesh on the bones of his stories. In a way it nearly was a whole gig.

But it wasn’t. I should have checked but I think we had about two hours of O’Rourke and his ensemble on stage. There were much loved classics and old tracks from way back, and new songs from his latest and his yet to be albums. “This is second album material” he told us as he launched into “Big Bad Beautiful World” from 2007. And “We Didn’t Mean to Go to Sea” seemed to soothe a room that was waiting for it, quietly singing with the words at their own candle lit tables.

There was a powerful “Children Of ’16, his latest single. And earlier on in his set he brought on his opening act Karrie O’Sullivan with whom he sang a gorgeous duet of “Whatever Else Happens,” seemingly made for her easy stretched vocals. O’Sullivan is a real life actual horse breaker. Yeah, that’s not something you hear too often in Belfast. Her voice was velvety, lush, with brushes of Joni Mitchell. Take a listen to “Performers,” it had apparently just been added to the RTE Radio 1 Christmas playlist that day. I’d go see a gig of Karrie O’Sullivan all on her own.

Meantime, with the day that was in it, O’Rourke left us with a “Christmassy taste in [our] mouth.” And on this his last number he brought out the spontaneous clapping and joining in of a contented room, telling us to “hooray” when needed. On finishing they got a standing ovation. And truthfully, this was one of those quality nights that does deserve it. 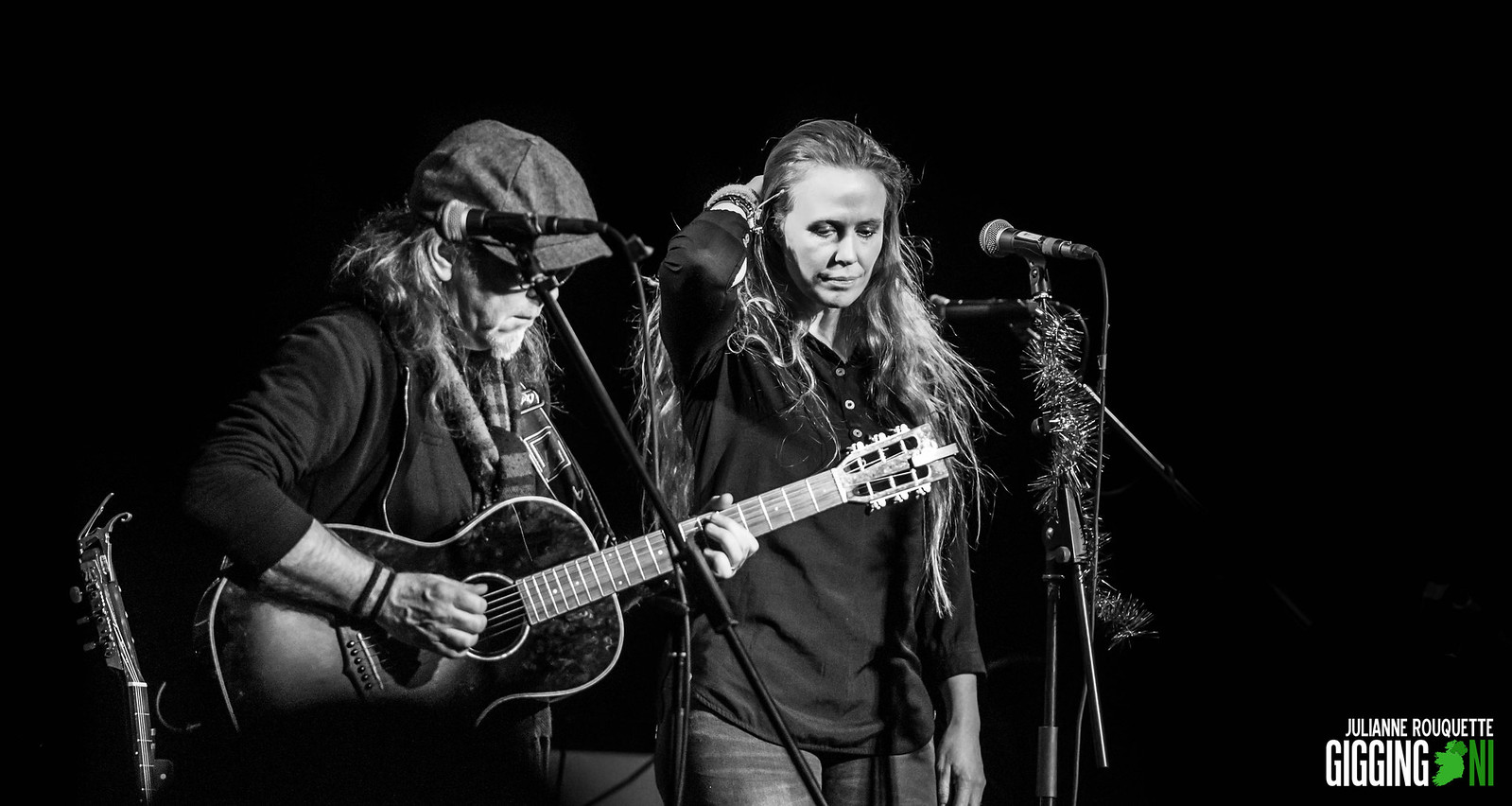