It’s been a while since there has been a queue stretching around three sides of the Ulster Hall, but they came out in their droves to see Tommy Emmanuel in Belfast last night.

Tommy took to the stage briefly to introduce his support for the evening, Belfast’s own David Browne-Murray, who treated the assembled guitar aficionados to a great set. Browne-Murray is only 27 but has already developed a very individual style that incorporates picking and percussive playing. We get to hear a mixture of self-penned tunes and unusual arrangements of well-known pop and dance tracks with a cover of Chaka Khan’s “I Feel for You” standing out. A driving version of the Faithless track “Insomnia” ends the set and Browne-Murray was treated to a rousing round of applause as he left the stage to make way for the evening’s headline act.

Tommy Emmanuel took to the stage like a man possessed and blasted out three fast and tight instrumentals in quick succession, tailing off with the melody from “Waltzing Matilda” – if you hadn’t already guessed, Tommy is Australian.

Tommy paid tribute to Chet Atkins with “The Man With The Green Thumb” and reminded everyone of his first ever visit to Belfast when he played in a small room upstairs in the Errigle Inn. Tommy lists Atkins as being one of his biggest influences, along with Merle Travis, Jerry Reid and Albert Lee. Next up was a wonderful version of “Deep River Blues” with Tommy providing vocals as well as guitar.

From there on, the evening was a showcase for Tommy’s virtuoso playing. He is a technically diverse musician, and this evening was playing to what seemed to be a very receptive and knowledgeable crowd. Tommy Emmanuel is, it has to be said, more than just a great guitarist – he is a showman and an entertainer, gently drawing the audience in with his stories and his acknowledgement of the debts he owes to his musical heroes.

Tommy plays blues, swing, jazz, country, folk – effortlessly and frequently switching between genres in both well-chosen covers and many of his own tunes and arrangements. It should be hard to take a song as well-known as “Secret Love” and make it sound fresh but Tommy begins with a simple melody and builds this into a crescendo of notes, chords and rhythms.

“Somewhere Over The Rainbow” has been a constant in Tommy’s set for a long time and he delivers a perfectly judged version of this while still having a bit of fun with it. Tommy then throws in a fairly hectic slice of pure percussive guitar which progresses through latin and samba rhythms and ends with Tommy hitting everything on the stage with ether his hands or a drummer’s brush.

Tommy plays the slower and softer “Angelina”, written for his teenage daughter and the darker “Blood Brothers” which he dedicates to the Guitars for Veterans programmes in America which he supports.

Taking a seat, we get to hear a set of slower songs including the beautiful “One Day” written by Martin Taylor, a tune which conjures Scots, Irish and American folk traditions before Tommy takes us on a thumping and jumping “Guitar Boogie” which detours through pretty much the entire history of blues and rock and roll guitar.

“The Tall Fiddler” is a wonder; a complex traditional fiddle tune played on the guitar followed by a crowd-pleasing lesson on how to play it. All except the really hard parts – as Tommy pointed out “that’ll take a bit of time.”

Tommy finishes with “Old Photographs” from his 2015 album “It’s Never Too Late” before a standing ovation from a sell-out Ulster Hall summons him back for “Lewis and Clarke” and finally, his intricately re-worked and punchy version of “Classical Gas.”

When you listen to Tommy Emmanuel you hear Chet Atkins, Merle Travis, Jerry Reid, Doc Watson, James Taylor, Ry Cooder and many others; but above all you hear a man who has taken all those influences and used them to develop his own individual and distinctive style. A top-flight guitarist and musician, at the top of his game and one who is definitely worth queuing round the block for. 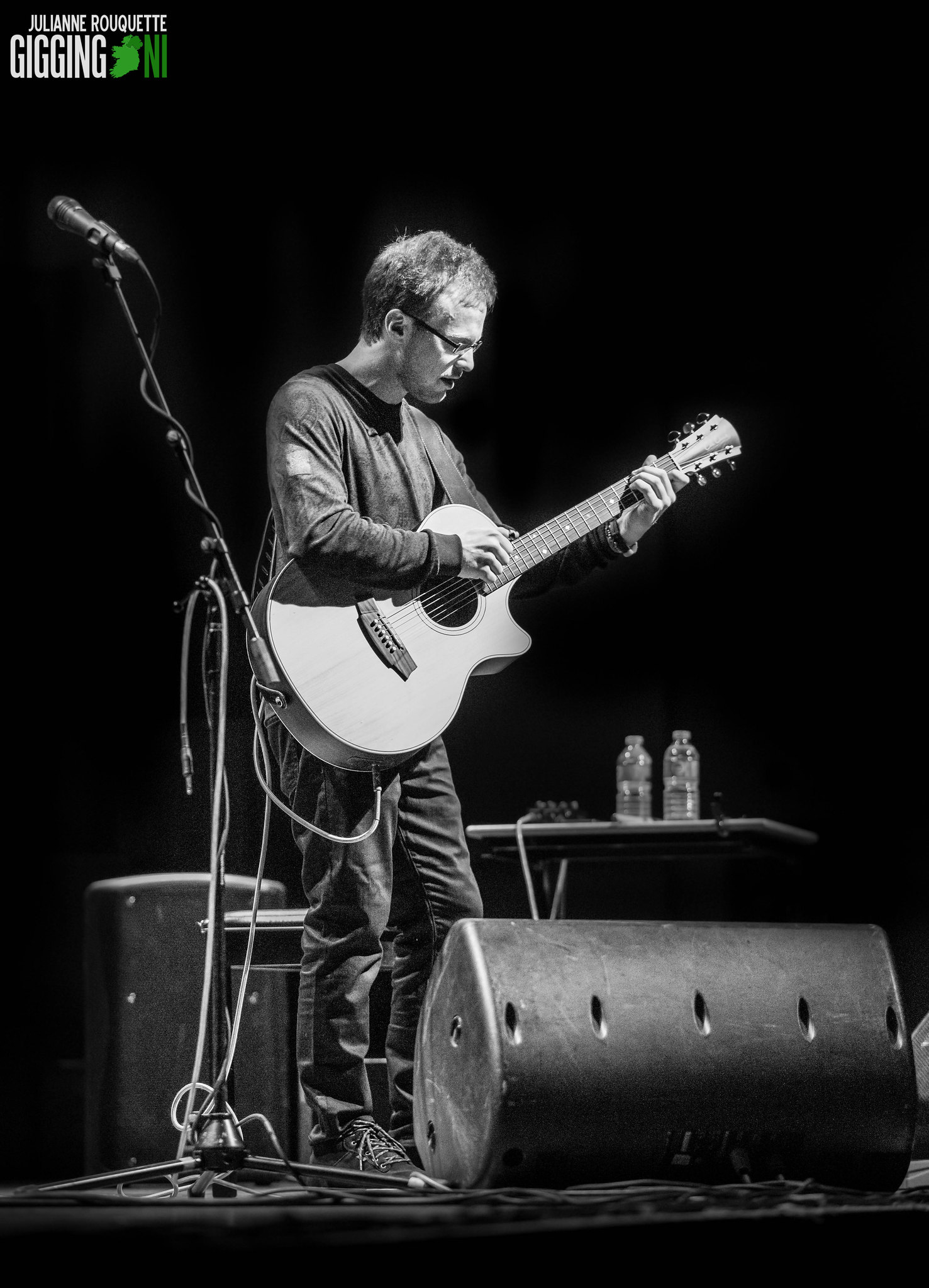