Where to even begin… Frightened Rabbit were back in Belfast on Tuesday night after their support slot for Foals at Belsonic last year. The crowd gathered in the Limelight were, thankfully, a lot drier than on that evening, and the band more than justified their transformation from second on the bill to headliners.

On the road supporting their fifth studio album Painting of a Panic Attack, the Scottish rockers are a band at the very peak of their powers. There was a three-year gap between the record which was released to critical acclaim last year and its predecessor Pedestrian Verse, and it’s clear to see that the time out of the limelight (no pun intended) has really served the band well. Inspired by lead singer Scott Hutchison’s move from Glasgow to Los Angeles – he’s since returned – the new album is filled with songs about the relatively unsuccessful venture, and almost all translate perfectly into the live set.

A decent crowd had assembled for support act Eve Belle, and the singer-songwriter’s gentle ballads didn’t disappoint. However, it was almost difficult to hear her sing at times as the incessant chatter of the crowd threatened to drown her out, which was a real shame.  Thankfully there were no such issues when the lights dimmed and the main attraction made their way onto the stage.

Kicking off with Painting of a Panic Attack’s Get Out, it took a little while for the sound men to do their thing, but it was clear from the very beginning that this was going to be something special. Epic strobe lights back-lit the band in time to the song, and Hutchison enjoyed a chat with the audience as it finished, telling everyone he was happy to be back inside, referencing that cold and wet evening at Belsonic last summer.

The setlist was a fine combination of tracks from the new album and the three that came before it, The Midnight Organ Fight, The Winter of Mixed Drinks and Pedestrian Verse, with only 2009’s debut offering Sing the Greys not represented.

While Holy gave the band their first opportunity to really let the guitars go and demonstrate the fact that they fully deserve to be classed as a rock band, The Modern Leper, the opening track from the much-loved The Midnight Organ Fight was a timely reminder for many as to how and why they fell in love with Frightened Rabbit in the first place. Whether I should admit it or not, I – a thirtysomething man – was stood in the crowd, covered in goosebumps, the hair on my arms and neck standing up straight, with tears rolling down my face. But isn’t that just the power of great music summed up in an admittedly tragic scene?

Some bands just have a way of taking a hold of you. From the first time that you hear them, you’re in and invested in everything that they do from that point onwards. For this reviewer at least, and I imagine a good few people in the Limelight on Tuesday night, Frightened Rabbit are one of those bands. From the stripped-back emotional beauty of The Midnight Organ Fight, through the less-well-thought-of but altogether more anthemic Winter of Mixed Drinks, to the new album, which is rich, deep and has the markers of its producer – The National’s Aaron Dessner – running through it, they make songs that tug at the heartstrings, make feet tap or inspire clenched-fist punching of the air. No matter how big they get, and their last two albums have been top-15 in the UK, it still feels, as a fan, that each track could have been written especially for you.

Throughout the gig Scott enjoyed chats with the crowd, whether it was wondering if cries were pleasure or pain “or maybe they’re just both” – or dedicating a song to anyone who “comes from a shitty little town. Not Belfast. Smaller. This one’s for you”.

While there were a couple of songs that didn’t necessarily light the crowd up, the setlist was designed to lift the audience at just the right time, with tracks such as Living In Colour – “here’s one of the five happy Frightened Rabbit songs, we’ll be back to the misery soon” – sitting next to Woke Up Hurting and I Wish I Was Sober from the new album, which had provided small opportunities to recover a little. Tearing through long-time favourites Head Rolls Off, Fast Blood and Nothing Like You, arguably the most memorable song of the night was Old Old Fashioned. It got the biggest cheer of the night as it began, and by the end, with the crowd chanting at the band, with a few swears and a broken mic stand thrown in for good measure, everyone in the place was fully invested in what was quickly becoming a special night.

Unfortunately, all good things must come to an end, and Lump Street, from the new album, in many ways felt like it marked the band’s growth the most. It’s bleak first couple of verses “Nothing is grown on Lump Street, each piece is fired inside a broken mould” opens up into a huge, frenetic anthem. It’s the kind of song that has stadium written all over it. The kind of song that festival headliners play. It was a fitting ending to a wonderful set.

Of course the crowd weren’t going to be content with that – and as good as demanded an encore. There would have probably been a riot had the band not resurfaced at this point.

Upon their rearrival, Scott asked everyone to get out their phones to film Death Dream, the opener from the new album, with the intention that everyone upload what they took to a site that creates a new, multi-angle video from the recordings. It sounds fascinating and is the ONLY excuse for people to be filming whole songs. The track itself was incredibly atmospheric, Scott casting a black silhouette on a stage swamped in blue, before The Woodpile and long-time finisher The Loneliness and the Scream brought the house down for the second time. The crowd were a collective sweaty mess, Scott was getting out of breath even finishing the song and the applause was deafening when it finished. It was a fitting ending to a wonderful set.

And… Then they were back again. Back for one last, rousing, tonsil-rattling, voice-costing, sweat-pouring, crowd-swaying, all-encompassing triumphant anthem in Keep Yourself Warm. Everyone in the place was involved, everyone dancing, everyone singing along as the band finished in style. It truly was a fitting end to a wonderful set. The band were doing their thing, yet the audience drowned them out, and despite Scott screaming the words into the mic, he wasn’t to be heard. The show belonged to the crowd now.

And then it was done. Frightened Rabbit left the stage, leaving behind them an audience buzzing at what they’d experienced, and what they’d been a part of. It was an electric performance by a quite wonderful band – and cemented the fact that they should have had that headline slot at Belsonic. *Take note festival bookers*. A stunning night that served as a reminder as to why we all love music, love the live music scene, and love Scotland’s finest indie rockers.

There are lots of big music coming this year in Belfast, but, without exaggeration, this may have already claimed the title of gig of the year. 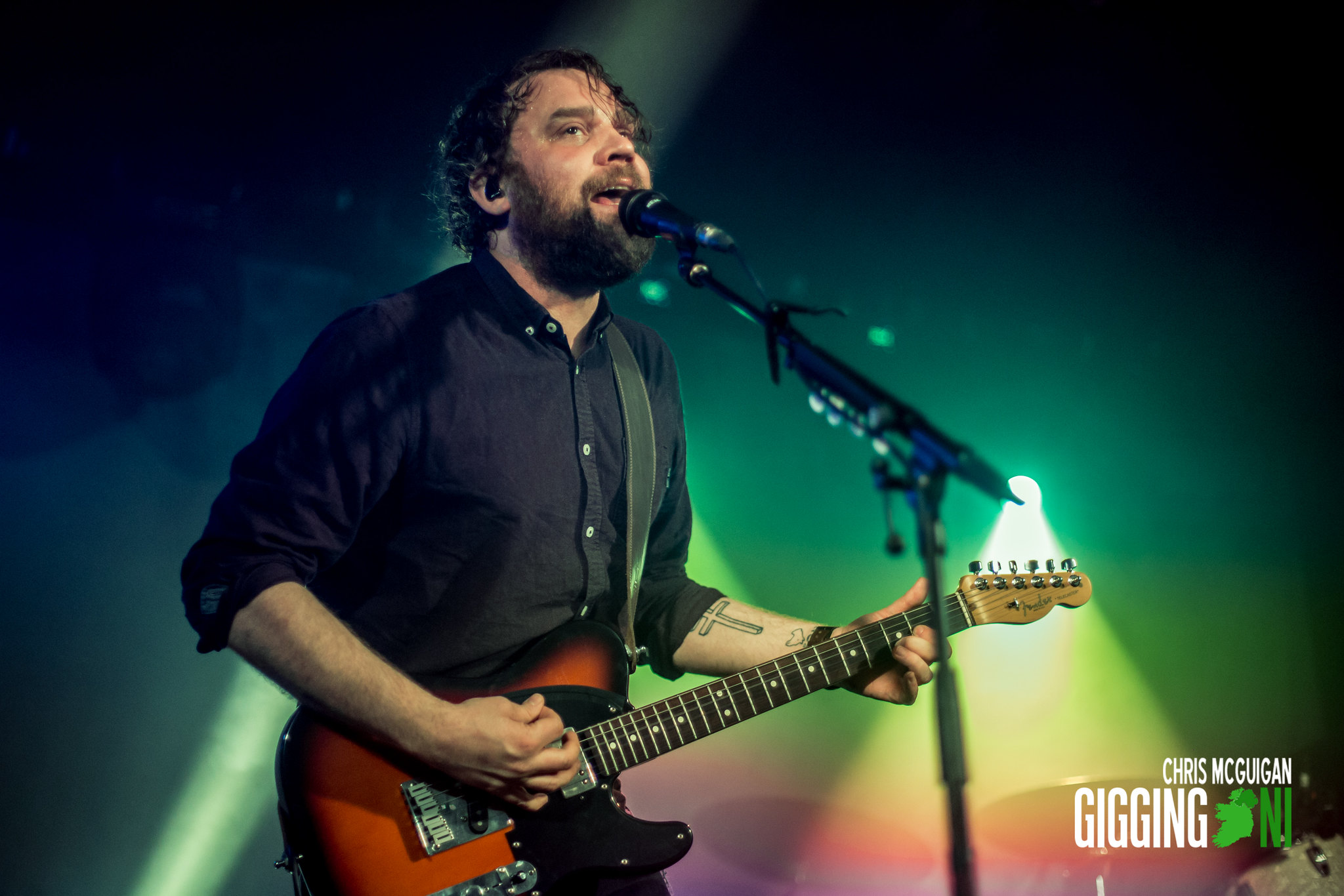