“Generally speaking about now I’d lament how long it is since we have been here, but this is the first time. Thanks for being at our 1st show!”

Dan “Soupy” Campbell notes how this is a statement The Wonder Years are able to make less and less these days. As of Sunday 29th January 2017, after 5 albums and over ten years, the pop punk band can finally tick Belfast of their touring checklist.

Tiny Moving Parts open the gig and the second night of the No Closer To Heaven UK/EU tour. The opening night in Dublin sold out and it seems Belfast cannot have been too far behind. The venue is all but full from doors, a sign that the crowd is acutely aware that it has taken so long for tonight’s headliners and the opening act to make it to the city.

Tiny Moving Parts have some of the hallmarks of a pop punk/emo band yet as Dylan Mattheisen shows his prowess on guitar it becomes apparent that they are not three chord advocates. With more technical elements like finger tapping and syncopated drum beats the band unveil their talent and a math rock element to their sound.  From the opening chords of “Sundresses” the band’s energy seems constricted by the small stage but they move around frantically regardless. As their set draws to a close with “Dakota”, their thanks seems as genuine as the vigorous crowd’s applause.

Trash Boat are the only band on the bill to have played a Belfast stage before & lead singer Tobi Duncan is sure to tell the crowd how good it is to be back. As they launch into “You Know, You Know, You Know” Duncan is confident that this will be a first for most of the crowd as the song had its live premiere only last night. The front line pogo across the stage with enough spins over the course of their set to make anyone feel dizzy. All the while Oakley Moffatt maintains a sense of solidity from behind the drum kit.  “Eleven” sees the energy levels reach their peak for the night so far as the front rows raise fists in the air; that is until Dan “Soupy” Campbell joins Trash Boat onstage for closing song “Strangers”. When he finishes vocal duties, he throws the microphone into the air and leaves the stage in an almost perfect movement however the microphone just slips through Duncan’s grip before he can round off the set.

As organ sounds and a booming bass ring through the venue, The Wonder Years take to a Belfast stage for the first time. As the title track from their latest album No Closer To Heaven builds from its restrained acoustic opening the crowd are already singing along with every word. This participation continues and builds throughout the night; without any instruction from the stage the entire crowd begins the first of a number of impromptu clap along during “I Don’t Like Who I Was Then”.

The Wonder Years prove that they are, and always have been about more than just a catchy hook and a fast guitar sound. During “Cigarettes and Saints” Campbell criticises the pharmaceutical industry whilst mourning the death of a friend in a song that is both musically and lyrically mature. Midway through the track Campbell takes over guitar duties from Matt Brasch freeing him up to play an additional drum and cymbal which miraculously fits onto the stage along with all six band members and adds another layer to the live performance.

From the soaring heights of songs such as “Cigarettes and Saints” and “Cardinals” to the stripped back “Madelyn”, The Wonder Years show their diversity. Whilst the crowd have been on board with every word that has been sung tonight so far, when Campbell reaches the lyric “I know how Irish goodbyes feel” there is an appreciative break in the collective voice that the room has become.

This voice is back on form however in full force after but a split second so that when the lead falls out of Campbell’s microphone during “Passing Through A Screen Door” they simply take over for the frontman until he is able to pick up where he left off. As The Wonder Years leave the stage, the call for “one more tune” is instantaneous and given the rapport between band and crowd, it’s a call that feels guaranteed to be answered.

As Campbell and the band return to the stage he tells everyone how, “we heard you calling for one more and we are happy to oblige under one condition – I want this to be the loudest you sang all night.” While this seems like it may be a tough one to live up to given what has passed, The Wonder Years dedicated fans do not let down and belt out “Come Out Swinging”. Crowd surfing and stage diving ensues and Trash Boat lead singer Duncan returns the favour to Campbell by taking over the microphone and singing from atop the crowd. The fans here have held up their end of the bargain and made sure The Wonder Years first Belfast gig is not one to be easily forgotten. Now that we have done our part, let’s promise not to leave it so long next time guys.

Scroll through our photo gallery, by Matthew Johnston, below: 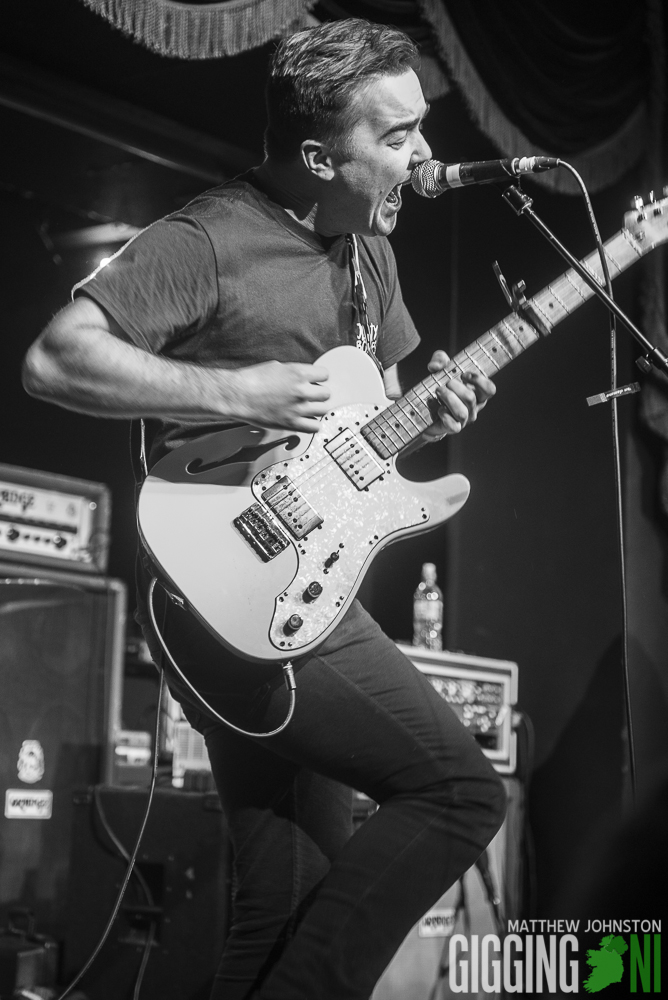