Last night saw punk veterans Frank Carter and the Rattlesnakes take Belfast by storm at the ever quirky Oh Yeah Music Centre. It’s clear to see that these boys are going from strength to strength; scoring a top 10 spot in the UK album chart with their 2nd album Modern Ruin as well as the accomplishment of playing a completely sold out tour. The English rockers project an undeniable sense of exultant pride as they dramatically roll onto the stage one by one, to be greeted by a thirsty audience that are crammed from wall to wall.

Frank takes a moment to look over the crowd, greeting us with his signature cheeky grin before kicking off the set with the explosive track that started the album campaign for Modern Ruin – Snake Eyes. The room is immersed in a sense of devilment and the crowd is hooked from the very first chord. Toward the end of the track they break down into simply vocals alone as the entire band harmonise as one. It’s safe to say that this tour is truly something special; that it means so much more to the band than just playing songs now. The meticulous planning and passion that’s gone into this set shines through and the audience know for certain they’re in for one hell of a night.

Next up is a fan favourite. The track with an ever fitting title – Trouble. Instantly cranking up the atmosphere, the room descends into anarchy. The chaotic crowd join together in unison for a mass punk rock singalong. Following this, Carter and the boys immediately launch into the anthemic classic, Juggernaut, which ensues more of the same. Frank Carter and the Rattlesnakes songs boast intertwining melodies and countermelodies, with guitars and drums pounding around the raw vocals. They undertake the very essence of punk in the most lively and menacing manner.

With the crowd soaked in sweat and gasping for breath, there’s no better moment for Frank to address the crowd properly for the first time with a hearty ‘hello Belfast’! Carter goes on to depict the next track as ‘the crowd surfing song’. He shocks the audience with his one rule and presents a women only crowd surf. He ensures a safe environment as he advises the crowd to ‘treat them with respect’ and issues a threat that he will ‘cut your head off with his bare hands if you don’t’. Mr. Carter is not a man to be messed with! This statement is met with thunderous applause as a plethora of girls swarm the stage and dive without hesitation into the crowd. Watching The Rattlesnakes perform the ear-splitting title track from their new album Modern Ruin from the air whilst being carried by the crowd is a truly tremendous experience that I urge everyone to get involved in.

There’s barely time to catch your breath before they forcefully propel into their next track Wild Flowers. It abundantly clear to see that the band are basking in sheer delight as they play their new songs live. The crowd are intoxicated, they prove that they share their idols exemplary attention to detail by singing along wholeheartedly to the new tracks. The band then launches into Vampires, playing once again with clear conviction and fervency.

The punk heroes continue working through their arresting set by belting out another fan favourite from their first album – Fangs. An element of hysteria sweeps across the masses as they cascade into disorder once again. It’s a testament to how well this band is working that the older songs are appreciated in equal level to the newer ones. It’s apparent that this band is destined for pursuant success.

This is where things start to get really interesting. Slow jam Neon Rust is a pinnacle moment of the set. The room is immersed in a golden sense of euphoria as the otherworldly atmospheric chords rip through and penetrate the audience’s ears. This track boasts an almost dream-like presence and bursts with such raw emotion that is must be considered undoubtedly as a work of art. The crowd goes wild in appreciation as Frank screams the words ‘we don’t belong in a wasteland’. An almost apocalyptic creation through which Frank has given so much of himself, this masterpiece resonates within all with regards to reflection, despair and hope for the future.

Back to standard practice, they launch into another rip-roaring, classic hit from the first album, Devil Inside Me. With the end drawing near, the crowd are sure not to waste a single second. They frantically bustle into mosh pits, immersing one another in so much energy as they carry crowd surfers through the air and absolutely lose control.

The signature closing track arrives. Frank rounds up the show by delivering a short speech about how to someone out there in this world, this song is about you and to you this song is about somebody else. The first chord has the fans utterly frenzied as they deliver to us the astonishing classic, I Hate You. Joining together for one final singalong, the crowd give whatever energy they have left to the awestruck band. Fans are still are desperately hungry for more as the band exit the stage, proving that Frank Carter and the Rattlesnakes are an unmissable live act. In addition to this, this superior performance affirms that they are truly one of the greatest bands around at this present time. We can only hope that they don’t keep us waiting too long before they grace us with their presence once again.

Scroll through our photo gallery, by Chris Mcguigan, below: 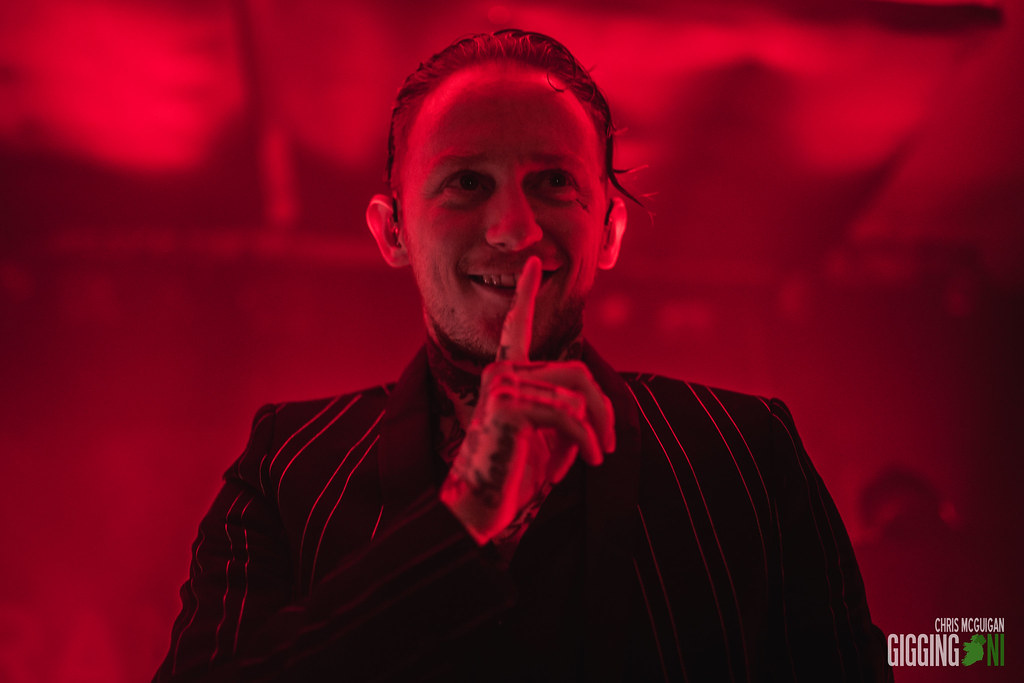