The “In The Round” format is much beloved by the Belfast Nashville Songwriters Festival; three musicians trading songs and stories, taking turns to play, joining in with the accompaniment.

Earlier in the evening, we were treated to Kimmie Rhodes, Gareth Dunlop and Brian Houston; talented singer songwriters who have a broadly similar style and whose performance complimented each other. This was a different beast entirely, and it would be difficult to imagine a more diverse trio of styles than Paul Brady, Darrell Scott and Declan O’Rourke.

Paul Brady has been a leading light in Irish contemporary music for decades and can slide effortlessly across and between genres. Darrell Scott’s résumé reads like a who’s who of country music, having worked with Steve Earle, Emmylou Harris, Sam Bush and Guy Clarke. Known as a top rank song-writer and session player in Nashville, he also recently toured with Robert Plant’s Band of Joy. The third of the trio is harder to define and describe. Declan O’Rourke is an Irish singer-songwriter who can write a ballad like few other people today. He talks and tells stories, sometimes meandering and going off on tangents, and this is played out in his songs. Probably best known for co-writing “Galileo” (covered by Eddi Reader, Josh Groban and Brian Kennedy among others) O’Rourke has a rich and soulful voice and a deadpan sense of humour.

It goes without saying that all three are exceptional guitarists and we are treated to a range of styles tonight. Brady brings upbeat pop and swinging rhythms, Scott provides blues/Americana and alt-country licks, and O’Rourke has a style that is part English folk, part traditional Irish and part something else entirely.

Paul Brady kicks proceedings off with “Smile” and it takes less than two bars for me to be reminded just how good a guitarist he is. Constantly moving and seemingly unable to stand still, there is no hint that he is slowing down. Darrell Scott is up next and he gives the crowd a bluesy rock and roll number “Gravity” – two songs in and the crowd are already clapping along. Declan O’Rourke then takes the stage and he references the quality of the preceding two songs by informing the audience that if he had a coat, he’d get it. O’Rourke is definitely the talker out of the three and he plays a new song called “Zeus and Apollo” but not before he has given it an extensive introduction.

The set continues with each performer taking a turn, and as things warm up the others join in with harmonies and guitar. Brady in particular is constantly watching the other two to see what they are doing and taking every chance to join in and coerce Scott and O’Rourke into singing backing vocals.

It’s interesting to hear Declan O’Rourke speak very eloquently about the influence that Paul Brady’s music had on him when he was growing up. He tells us of a time touring with Paul Brady, when he asked Brady what music he listened to, what were his influences; Brady went out shopping the next morning and presented O’Rourke with a pile of his favourite CD’s.

It is definitely Brady who provokes the biggest reactions from the audience and the songs he chooses to perform this evening are superb; “Rainbow” is a driving pop tune and perhaps the standout from his set.
Scott plays a truly wonderful cover of the late Stuart Adamson’s “Shadow Cross” and O’Rourke’s performance of “The Magic Road to Anywhere” was heartfelt and touching.

By the time we get to the last round of songs the crowd are loud and having a ball; they would have been up and dancing if there had been enough room as Brady serves up a sing-a-long version of “The World is What You Make It.”
O’Rourke keeps his big hit for the last song of the night and he dedicates “Galileo” to none other than Gigging NI’s photographer, Julianne Rouquette.

This is only one of a huge number of great concerts put on by the Belfast Nashville Songwriters Festival across five days; it might be hard to top this though.

Scroll though our photo gallery, by Julianne Rouquette, below: 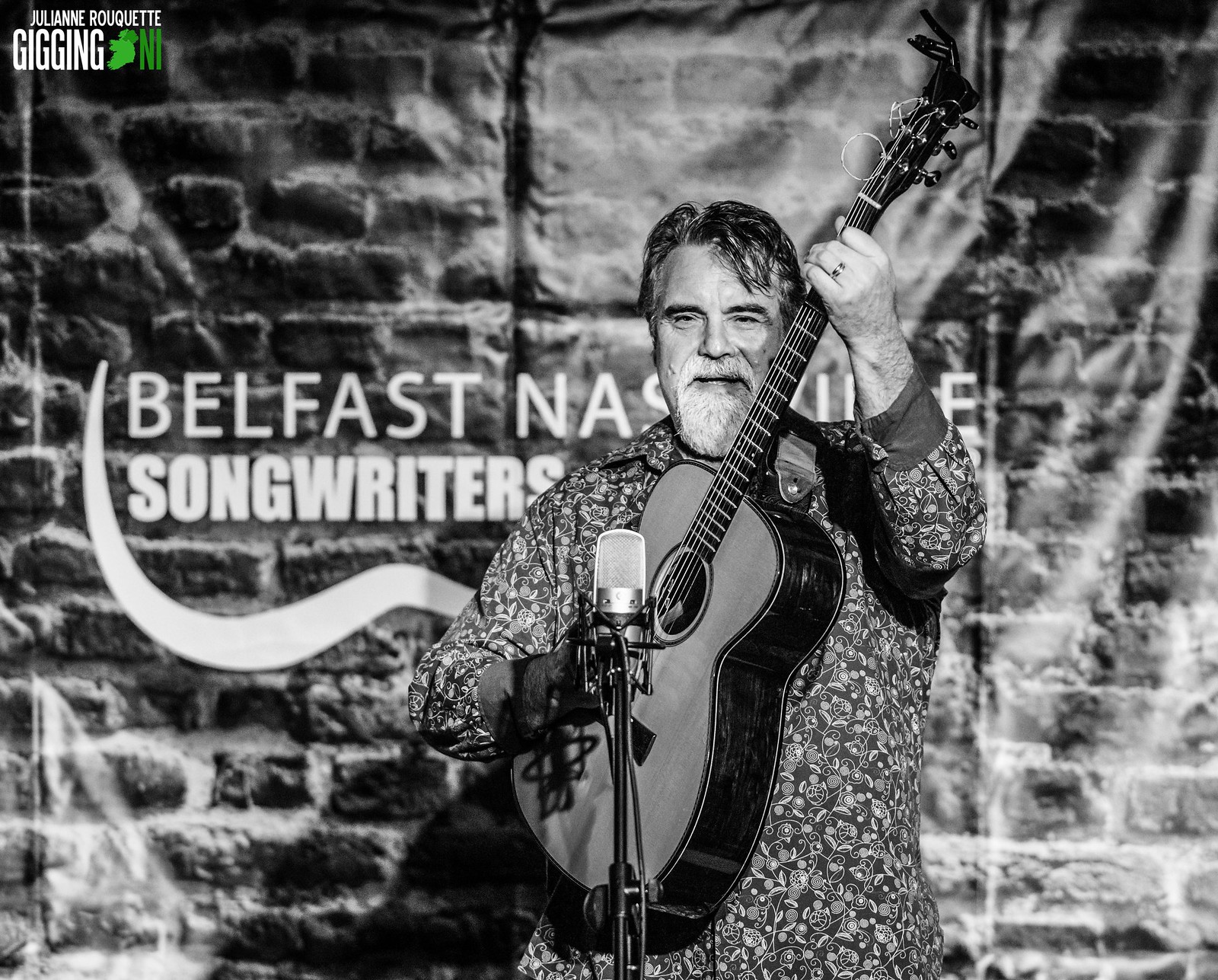