I wonder if someone should tell Sir Bob Geldof that he’s 65 now – because he doesn’t appear to have noticed!

The Boomtown Rats frontman delivered a set that was over an hour and a half long, with the energy of a man a third of his age. The Boomtown Rats are one of Ireland’s most important and influential bands and after their performance in Belfast’s Mandela Hall tonight it’s easy to see why.

There are certain artists who command absolute adoration from their fans and The Boomtown Rats are one of those bands. Grown men practically wept with joy when their new wave hero took to the stage with a storming version of Close as You’ll Ever Be from their self-titled debut album, followed in quick succession by their first major single Like Clockwork, then Neon Heart.

Never one to shy away from the topical, Geldof then launched into an introduction to the epic She’s Gonna Do You In, explaining that while it was written for Thatcher’s rise to leader of the opposition in ’75, it’s just as pertinent today and he dedicated it to, “Arlene, Theresa May, Nicola Sturgeon, and Enda Kenny”. It’s a classic track and this eight-minute version complete with face-melting harmonica solo was staggeringly good.

Between songs Geldof was as acerbic and entertaining as you might expect, his now legendary snakeskin suit making him look like the quintessential rock star, while he delivered the breaking news that Trump had failed to “kill” Obamacare. On the topic of Trump he shared the concern he’d felt earlier that evening in his hotel room that the microwave might be watching him and that Trump might be listening to his every word. “The microwave doesn’t care if it’s 1979 or 2017, there’s always someone watching” he declared, before launching into Someone’s Looking at You, the 1980 single which paints a paranoid picture of Orwellian government surveillance.

Next was the reggae flavoured Banana Republic, a scathing and still relevant attack on The Republic of Ireland and Geldof’s denunciation of nationalism, medieval-minded clerics and corrupt politicians, followed by the punk classic She’s So Modern. All around the capacity crowd were jumping up and down as one and with one voice they chanted the timeless lyric, “’cos it’s exciting for the veterans and it’s a tonic for the troops”. Arguably their best known single I Don’t Like Mondays was next. It’s a strange sensation to see a live performance of a song that has become such a part of our collective psyche, and it was a remarkable rendition with everyone singing along.

A discernible shift in mood ensued with Sir Bob sharing a tale about a kid who’d hang around all their early gigs carrying drumsticks so he could pretend to be in the band. The news that he’d been murdered inspired the guitar led Joey’s on The Street Again. The band then switched things up again with fan favourite, pop-punk classic Mary of the 4th Form and the crowd were ecstatic! This version differed from the usual two-and-a-half-minute pop nugget though, as the band meandered into all sorts of weird and wonderful digressions in the middle; Geldof wandered around the stage during this interlude and asked the crowd; “Do you know how long it takes to drive from Battersea to Belfast? It’ll take a whole lot longer if those c***s get their way!”, before declaring that if John Lee Hooker were to switch on his TV and witness the current state of war, chaos, poverty and Brexit, he’d pick up his guitar, look in the mirror and say “Boom, Boom, Boom, Boom!” A distinctly bluesy guitar solo then created the perfect segue back to the closing bars of Mary…

Just when you thought the crowd couldn’t get any more excited, the egocentric Looking After Number One sent them over the edge; the place erupted, the people moved together as a mass. The much anticipated Rat Trap ended the set; it’s a rip-roaring song which stands the test of time, deserving of its place in history as the first song by an Irish artist or by a punk band to reach number 1 in the UK charts.

All that was left was to introduce the band, and with founding members and masterful musicians Garry Roberts, Alan Dunn, Pete Briquette and Simon Crowe Back together this felt like a genuine Boomtown experience. Bob Geldof’s voice is better than it’s ever been and he absolutely gives you what you want from your rock stars – a riotous, rampaging rock performance.

Diamond Smiles was the encore and in spite of its dark theme, the fans were elated. Then we were told that they were going to break with tradition and do a cover – and what a cover! Honouring their Dublin brothers, they blasted through Thin Lizzy’s The Boys are Back in Town, and for a few moments I knew what it must felt like to have been a teenager in the ‘70s – and it felt great!

Filing out amid the happy, sweaty fans past the posters emblazoned with such distinguished names as Radiohead and Snow Patrol, it felt like something important had happened here tonight. If the rumours are true that Mandela Hall’s days may be numbered, I’m glad I was here while there was still a chance to see Dún Laoghaire’s most famous sons in one of Northern Ireland’s most famous and best loved venues. 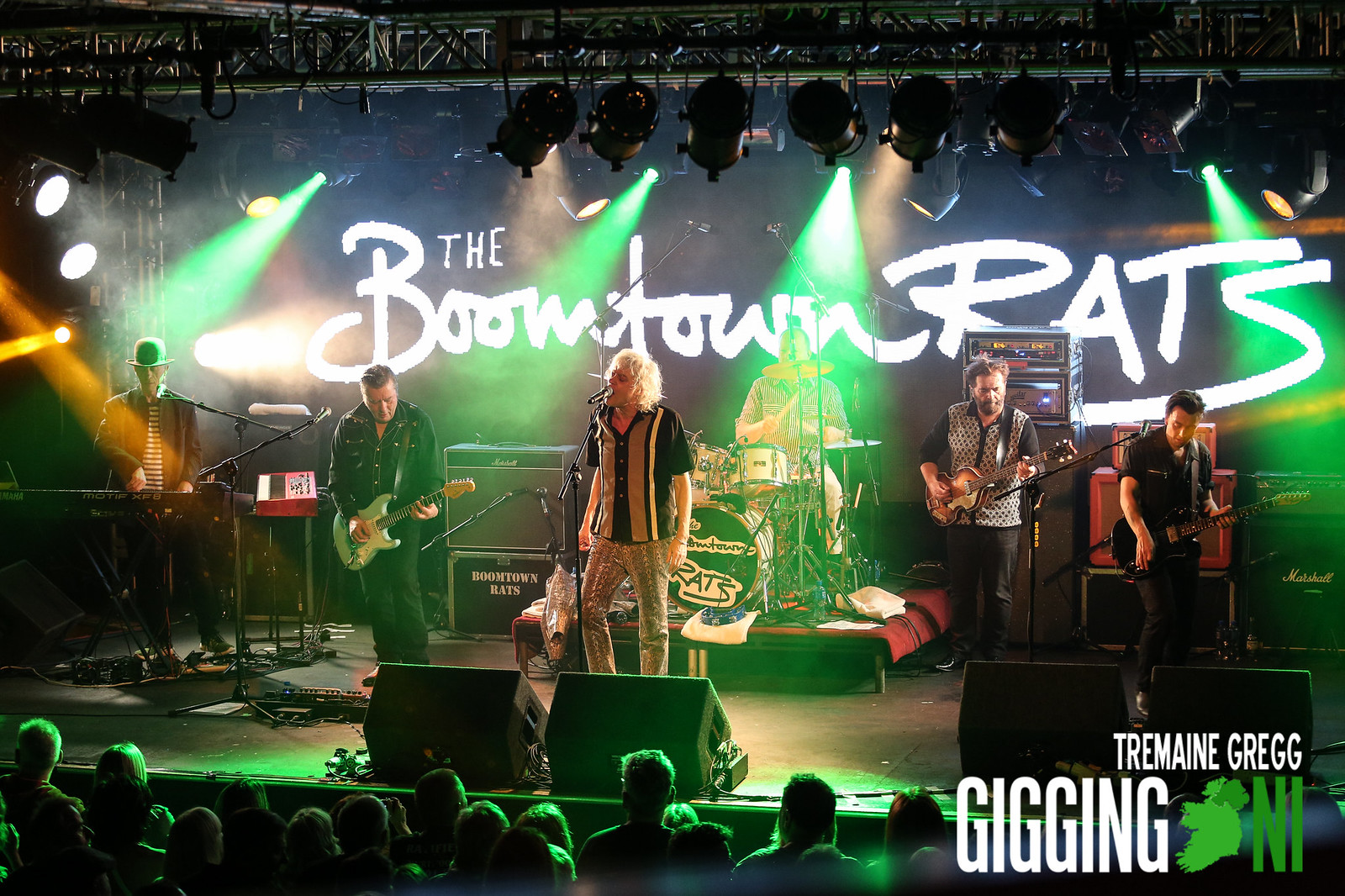