In my humble opinion, Therapy? are one of Northern Ireland’s success stories. Formed in 1989 with fourteen albums & a consistent touring schedule, they are something for local bands to aspire to. And with a loyal following of fans who come out and to watch them play at every opportunity, young upstarts could take a leaf out of their books. They kick off their ‘Wood and Wire‘ tour in a ‘hometown’ venue and are playing exclusively stripped back acoustic versions of their hits.

The Empire Music Hall is a sea of black t-shirts with the Therapy? logo and a great mix of ages. As the three piece come onto the stage, the room erupts with cheers and applause as Therapy? are welcomed like old friends.

Kicking off with ‘Trigger Inside,’ frontman Andy Cairns informs us that the set is acoustic but not like Ed Sheeran. The punchy riff heavy song is followed up with B-side ‘Our Love Must Die’ and the country feel suits tonight’s unplugged feel. It’s a different atmosphere from a usual Therapy? show and the tone is set early on when Cairns dedicates ‘Disgracelands‘ to America and in particular Trump. Although the song is from the 1992 album Nurse, it’s lyrically relevant today with its chorus of ‘Lost Your Culture’.

Tonight’s gig is full of anecdotes and the band seem relaxed and willing to share. Somewhat of ‘An Audience with Therapy?,’ we are treated to stories behind the songs and yarns about the recordings of their albums. There is even an interesting story about Peter Gabriel and his, ahem, sledgehammer. It’s all very sex, drugs and rock n roll but with a healthy dose of Northern Ireland humour thrown in.

‘Tides,‘ from the 2016 EP of the same name, is up next followed by the blistering ‘Living in the Shadow of A Terrible Thing’. Although the gig is acoustic, nothing is lost in terms of power and energy and it’s a treat to hear favourites pared back in this way. ‘Evil Elvis,’ the B- side to ‘Die Laughing,’ gets an airing next, in my opinion the best of their bonus tracks.

‘Skyward‘ and ‘Accelerator‘ follow, with the latter dedicated to the Hatfield Bar, with Cairns reminiscing about living in The Holylands, ‘It was a psychadelic time’. ‘Lonely Crying Only,’ from the 1998 album Semi-Detached, sounds as radio friendly as ever. It’s surprising, with catchy songs like this, Therapy? did not receive more mainstream radio play.

Ending the first half of the show on ‘Gone‘ from 1992’s major label debut Nurse, the band leave the stage and the crowd expectant of more. After a short beer break we are all ready for the second half and, when the guys return, they kick into ‘Meat Abstract’ from the debut album Babyteeth – we are not disappointed. ‘Unbeliever‘ turns into a sing-along and it’s clear that the second half of the set is highly charged with fan favourites. Before ‘Loose‘ we are treated to another story about the inspiration for the song and it’s great to hear where the imagery and lyrics come from.

The pace is slowed down next with their famous cover of Husker Du’s song ‘Diane‘. It’s brooding and menacing and, although it’s missing the beautiful cello of the recorded version, Mike McKeegan’s insistent bassline takes centre stage instead.

‘Potato Junkie‘ is next with Cairns quipping that this song is why his mother can’t come to watch them play live – I can see why, though, it’s a remarkable thing to hear a massive group of fans sing ‘I’m bitter, I’m twisted, James Joyce is f*cking my sister’!

‘Stories‘ is next, a firm favourite of mine, with the chorus, ‘Happy people have no stories’, and although it’s missing it’s guitar solo, it is no less brilliant. ‘Turn‘ from 1994s Troublegum album still sounds fresh at 23 years old with Neil Cooper’s dance beat complimenting McKeegan’s intricate bassline. On ‘Stop It You’re Killing Me’ audience participation is required and Cairns encourages the crowd to chant along, admonishing our first attempt as sounding like ‘a boy scout hut in Ballyclare at ten past seven on a Tuesday night’ and telling us he ‘wants it fucking louder’. Naturally, we oblige and the shouts of ‘Hey! Hey! Hey!’ reverberate around the Empire.

Up a notch again as ‘Nowhere‘ is played and followed quickly by ‘Knives‘ which descends (obviously) into a shout along moment, no one missing a word. ‘Screamager‘ is the penultimate song of the set, and by this stage, the crowd are well oiled and ready for it. Unfortunately for those around me, I’m a bit too oiled and singing the guitar parts. I’ve been doing it in my head all night, and due to high spirits and a love of Therapy?, I can’t keep it in any longer!

Cairns dedicates their final song ‘Die Laughing’ to Kurt Cobain and with that the set is over. Promising to come back with a new album and and a show Therapy? leave the stage and, even though their set list was a beefy 27 songs long, I get the feeling many of us would happily sing and shout along with more. The ‘Wood and Wire’ tour may be acoustic but the love that Therapy? fans have for the band and their music is most certainly electric. 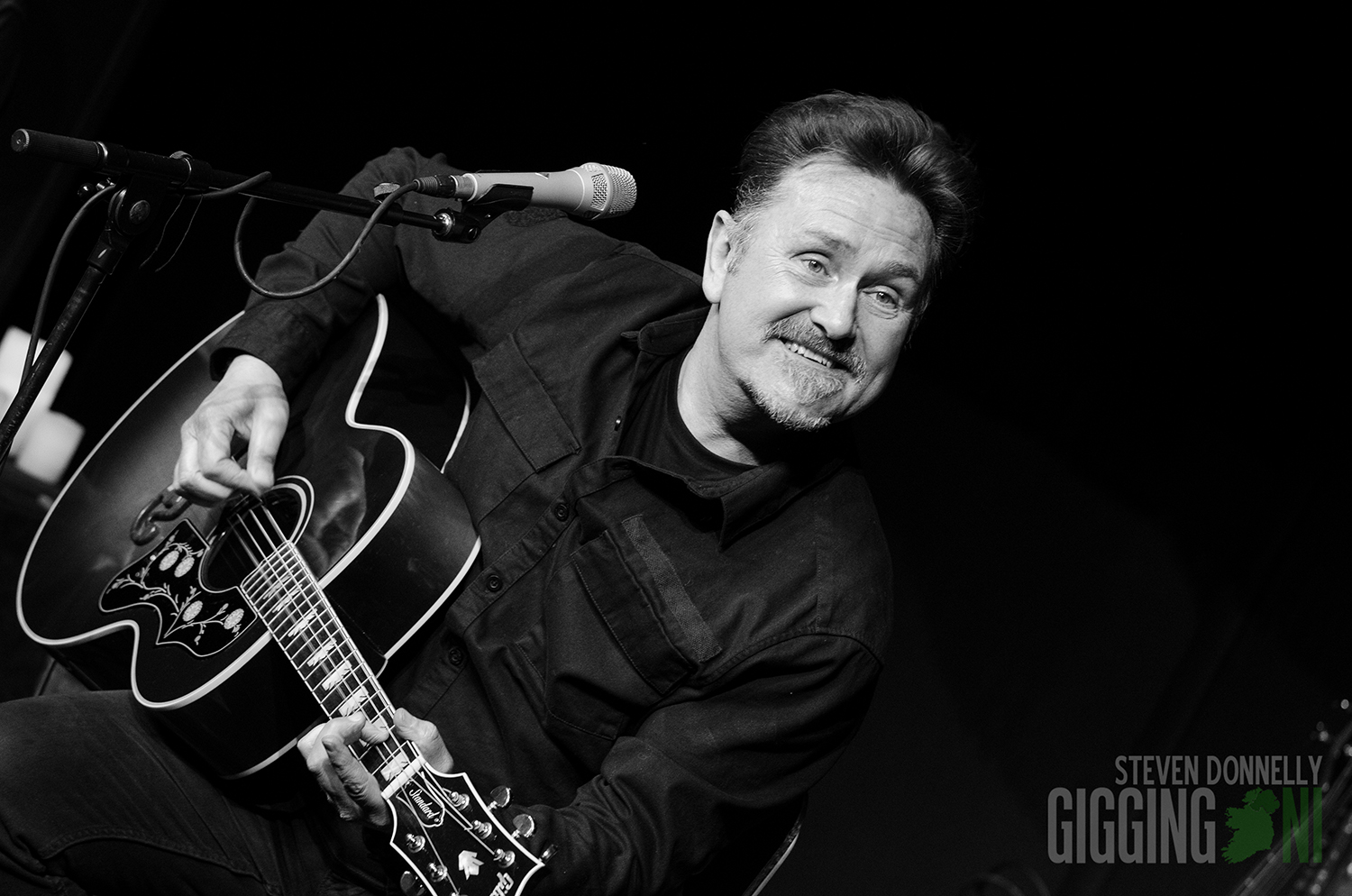