The Seventies had The Clash, The Eighties had The Ramones, The Nineties had Sultans of Ping and our generation has the left-wing Liberalism of Cabbage.  The Manchester based band absolutely killed it in Voodoo on Wednesday night with their daring lyrics and surrealist performance.

The night kicked off with Derry/Donegal band Waldorf & Cannon.  As you walk into Voodoo and hear the guys playing, you expect to see a full set on stage.  The shock when you realise it is two musicians not only playing all of the instruments but making an incredibly impressive amount of noise.

They kicked off their set with “Rise Up”, the first track from their album Old Dogs New Tricks.  Despite Voodoo being relatively quiet at this point, their music was getting a good reception from the crowd.  Their unique set up of vocals, a footdrum kit, guitar, harmonica and bass gave the set a fresh vibe that was a nice change to a full band.   Their performance is comparable to that of Royal Blood in that it is hard to believe two people on the stage are playing every musical instrument you hear.  Their set went on to play more of their album tracks such as “Syntax error”, “Bore You” and “End of the Line”.  A brilliant surprise was their final track – a cover of Beastie Boys “Sabotage”.  The energy was amazing and the vocal range paid an amazing homage to the Beastie Boys.  Waldorf & Cannon were a perfect choice to open for our main headliners and I will 100% be looking forward to what they bring to the Northern Irish music scene.

After what felt like five minutes Cabbage nonchalantly climbed up onto the stage, said hello to Belfast and went straight into one of their more well-known tracks “Uber Capitalist Death Trade”.  From the very beginning every single band member was giving it their absolute all.  The singer, Lee Broadbent, had a Joe Strummer-esque way of performing but juxtaposed it with tailored clothing and a personal way of singing to the crowd (not at us).

As the set list went on we heard gems such as “Necroflat in the Palace” with lyrics we can all identify with such as “I was born on the NHS/I wanna die on the NHS”.  They’re very cleverly striking a chord with subjects we can all relate to as working class people but they juxtapose it with chaos and confusion.  Can you get more seventies punk than that?

Throughout the set there was a swapping and changing of singers.  One minute we had Lee Broadbent and then a few songs in we had co-lead singer Joe Martin.  It was a real change of vibe when Joe took to the mic.  His part of the set started with a swig of Stella from a can and went onto a strip tease in which he lost his shirt.  We went from Joe Strummer to Mick Jagger in a matter of minutes.  It kept the set interesting and dynamic – we never quite knew what was going to come next (a feeling that is very adamantly reflected in their politicized lyrics).

As the night continued we were given gems such as “Terrorist Synthesizer”, “Dinner Lady” and “Gibraltar Ape”.  Their energy throughout the entire set never once wavered and the opting for Stella over water gets my approval.  The performance wasn’t just limited to the lead singers, however.  Every band member absolutely killed it.  Stephen Evans’ strong bass lines alongside Asa Morley’s absolutely sick drumming and Eoghan Clifford’s perfection on rhythm guitar made the gig an undeniable success.

Cabbage have fast established themselves in the UK over the past year spreading from Manchester over to our wee country.  Their highly politicised truths alongside their punk rock performance and attitude is exactly what people need right now.  Next time instead of listening to The Clash or Sex Pistols, give Cabbage’s Young Dumb and Full of a try.  Trust me, it’s a great way to get out all of the frustrations whilst also listening to a quality band that are undoubtedly destined for bigger things. 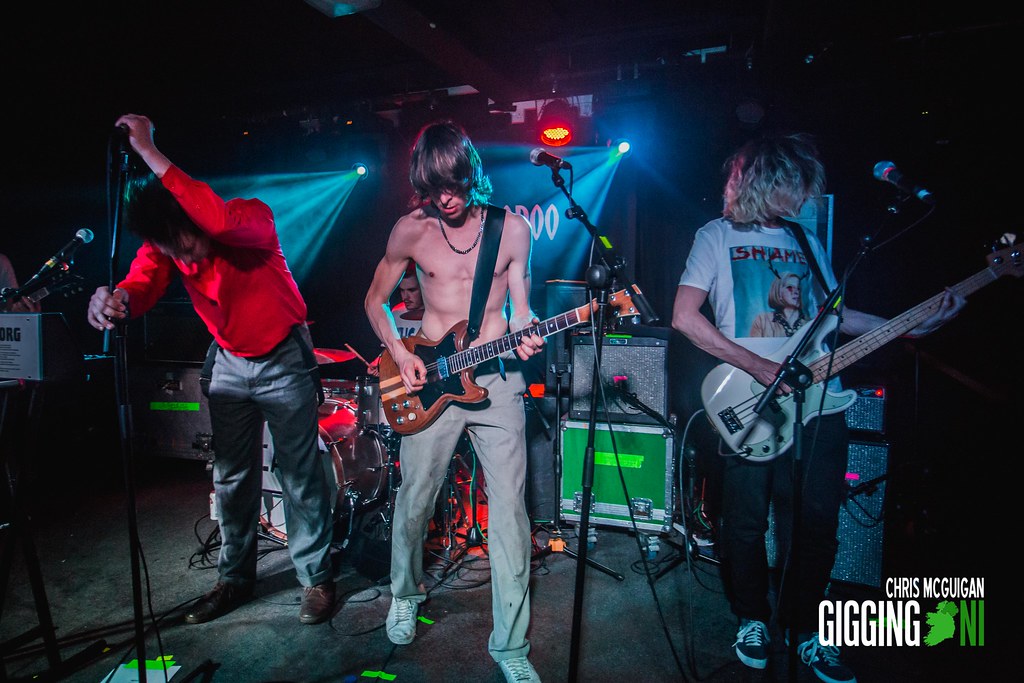