The Divine Comedy first came to my attention in 1996 with their song ‘Something For the Weekend’. It was not like anything I had ever heard before and I was hooked, buying the single on cassette in ‘Cheekys’, my local music shop in the tiny Tyrone town I hail from.

After kicking off with ‘Sweden’ and ‘How Can You Leave Me On My Own’ , chanteur Neil Hannon, resplendent in French military costume, addresses the crowd with a “Hello tent full of people!” before informing us the last time he was in a tent it was cold, wet and full of spiders. Not so tonight, it is heaving with people, warm and the marquee ceiling festooned with fairy lights. Joking with the crowd Hannon seems in fine fettle, asking “Are you ready to rock? Because we’ve just done it, its downhill from here”. Fitting nicely with the French theme, ‘The Frog Princess’ is next with its snippet of the French national anthem at the start and the crowd gently find their voice on this number.

Asking if we are “ready for some more Napoleonic shit?” we are treated to ‘Napoleon Complex’ from 2016’s Foreverland album. It’s great live but missing the additional vocals on the chorus that the recorded version has- from Hannons partner, singer songwriter Cathy Davey. ‘Catherine The Great’ from the same album follows swiftly and its clear to see why The Divine Comedy have a reputation for being orchestral and somewhat twee with their grandiose arrangements on songs. So when they cover the Burt Bacharach song ‘Alfie’, it’s no great surprise and is in keeping with their sound.

Before ‘The Pact’, Hannon takes a swig of his pint and somewhat teases the crowd by saying #2Drink, feck, arse”, alluding to his involvement with the much loved Father Ted. The crowd eat it up and for the first time tonight someone shouts for ‘My Lovely Horse’ to be played as Hannon wrote the song for the Eurovision episode of the comedy. The pleas are ignored and instead ‘To The Rescue’ with its laid back vibe is rattled off instead. It is less overstated than other tracks and provides a welcome contrast.

Disappearing offstage for a quick costume change, as if by magic Hannon returns looking like Mr Benn in a black suit and bowler hat to serenade us with ‘The Complete Banker’ from 2010’s Bang Goes the Knighthood. It’s still sadly, quite relevant to todays world where the poor get poorer and the rich get richer and we haven’t quite recovered from the 2008 recession he references in the song. Following it up with ‘Bang Goes the Knighthood’, the eponymous track from that album, Hannon’s quick wit and social commentary is on top form.

Cranking it up a gear with ‘Generation Sex’ from 1998’s Fin de Siecle, again, I’m struck by the witty and pointed lyricism of Hannon. It may sound twee and radio friendly but there’s no doubting the intelligence in the song writing. Tonight’s support Lisa O’Neill then joins the six piece on stage for a Cole Porter-esque duet of ‘Funny, Peculiar’. It works well and breaks up the set a bit adding another dynamic.

‘Songs of Love’ or as we all know it, the Father Ted theme tune is up next and the crowd are elated, with everyone singing along and when its over, again the calls for ‘My Lovely Horse’ begin. Laughing it off Hannon promises us “something far more obscure” and in its place plays ‘Something For The Weekend’. It’s my favourite Divine Comedy song and it really stands the test of time as it had somewhat of a classic feel to begin with. I could go home happy now but the hits keeping coming, with ‘Becoming More Like Alfie‘ from 1996s Casanova album another highlight for me.

Things take a surprising turn during ‘At the Indie Disco’, when after the line “She makes my heart beat the same as at the start of ‘Blue Monday” the band actually start playing the intro of the New Order song and to be honest, it’s bloody great! Those are words I never thought would go together – The Divine Comedy playing Blue Monday! But there you go, it’s unexpected and funny and showcases the already evident talent of the band. Ending the set on ‘National Express’, their biggest hit to date, is a fantastic move as everyone is keen to sing along before the night is over and, even the people in front of me who have been watching through a phone screen all night, deign to put it down and have a shimmy along.

Leaving the stage briefly, the six re-appear to play ‘Assume The Perpendicular’ a send-up of class structures and upper class in England. Ending with ‘A Drinking Song’ and ‘Tonight We Fly’ , we are thanked profusely and with a flourish the night is over.

Definitely an inspired booking by Cathedral Quarter Arts Festival and, with lush arrangements and jocular lyrics, there seems no reason why The Divine Comedy cannot continue to draw audiences to their particular brand of orchestral pop. 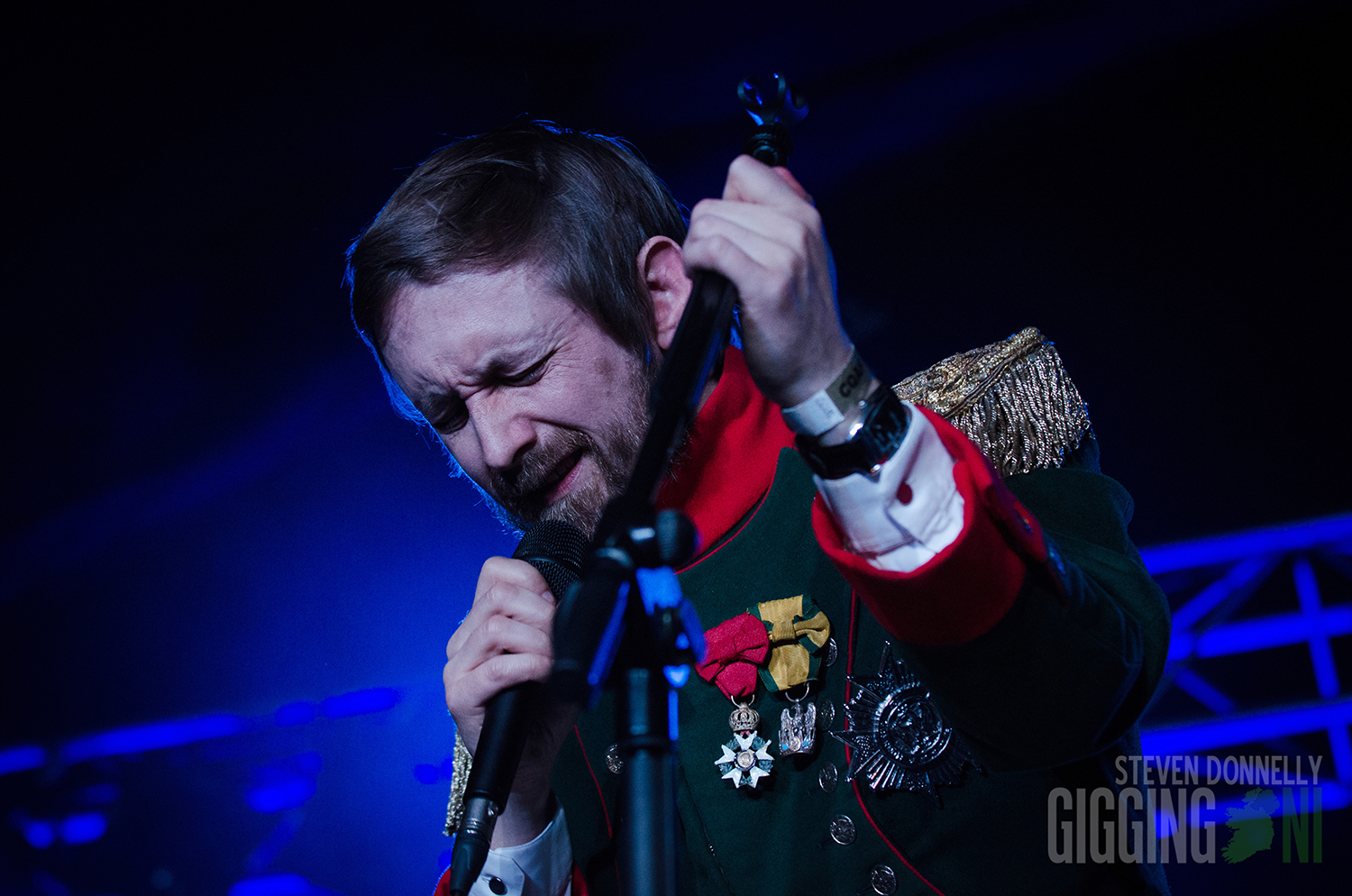