On Wednesday night thousands of teenage girls flocked to the SSE Arena to see popular pop rock band The Vamps. Despite not having released a new album for two years, the band brought their world tour to Belfast, playing to an almost sold out arena. With support from Disney-star-turned-singer Sabrina Carpenter, all aspects of the concert highly appealed to the band’s young fans.

Eighteen year old Sabrina Carpenter opened for the band, and appeared highly popular with the crowd. Sabrina has been releasing music since 2015, after starring in the popular Disney Channel show Girl Meets World. Obviously no stranger to the world of entertainment, she engaged with the crowd throughout her set. After performing single “Eyes Wide Open” the singer launched into a cover of “Thats What I Like” by Bruno Mars, commanding the crowd with her energetic performance. Bounding around the stage throughout and waving to fans, the singer declared that whilst this was her first time in Belfast, it wouldn’t be her last. She finished with 2016 single “On Purpose” before leaving the stage to the high pitched screams of the crowd.

We didn’t have long to wait before the arena was plunged into darkness in anticipation for the main act. This sent the crowd into frenzy, an atmosphere that was upheld throughout the entire concert. The curtains descended as The Vamps began their set with “Wake Up” from their latest album of the same title. Upon entering the venue earlier that evening it was impossible to ignore the giant walkway that had been constructed to allow The Vamps to walk from one end of the arena to the other at their leisure. This allowed those at the back to interact with the band, and resulted in teenage girls frantically running to and from their seats to get that little bit closer each time the opportunity arose.

Frontman Brad, a clear crowd favourite, spent the majority of the set engaging with fans and encouraging sing-alongs. Performing single “Wild Heart” with infectious energy, and knowing exactly how to stir the crowd, he announced, “Belfast, we missed you. Did you miss us?”

Throughout the set The Vamps took the opportunity to plug their new album, scattering in a handful of songs from the highly anticipated Middle of the Night. These were well received by the crowd, the repetitive and catchy nature of the band’s material making it easy for their fans to pick up. Sabrina Carpenter returned to the stage to assist the boys in performing new song “Hands,” before taking on Demi Lovato’s part in hit single “Somebody to You.”

Mid way through performing their own material The Vamps performed a medley of popular songs meshed with Ed Sheeran’s “Shape of You.” This was a highlight of the night, with even the most reluctant parent up on their feet. Drummer Tristan then made an appearance at the front of the stage to perform a drum solo, a rare moment at the forefront that the crowd appeared to really treasure.

After performing debut single “Can We Dance” The Vamps left the stage and the inevitable pre-encore darkness loomed over the arena. The screaming of the fans didn’t diminish however, and the band soon returned to perform “Rest Your Love,” before finishing on firm favourite “All Night.” This served to rile the crowd up even further, with nobody ready to leave once the encore had ended and the lights came on.

Whilst the target demographic of The Vamps is unquestionably young girls, they certainly know how to put on a show to capture the attention of all ages and tastes. The passion and energy with which they play, coupled with their charm, is infectious. 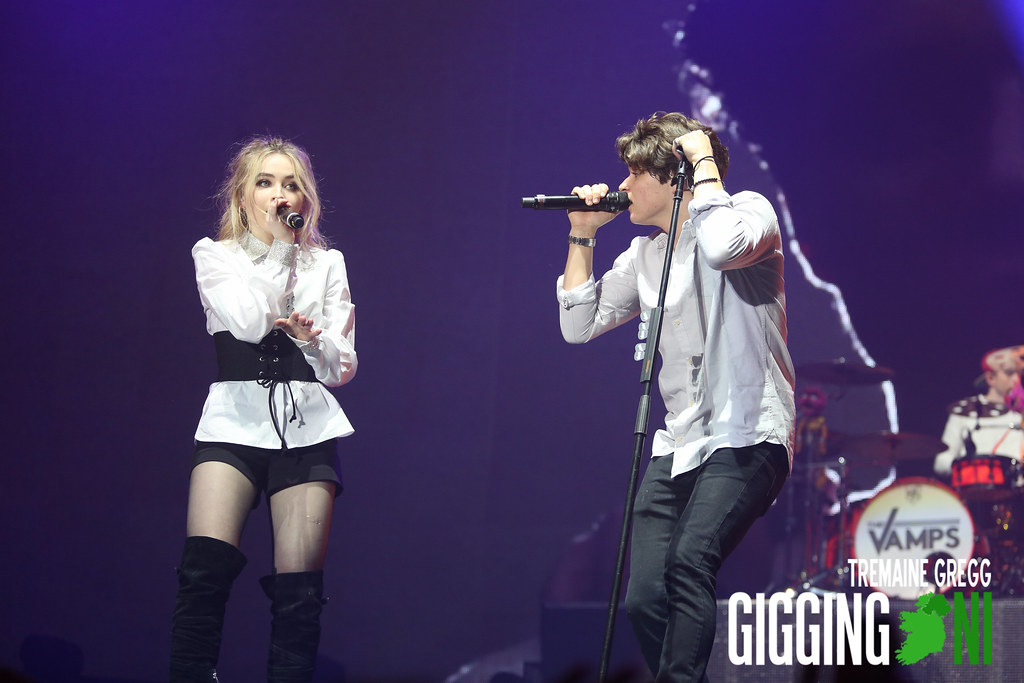