It’s official – festival season is well and truly underway as Belsonic kicks off a Summer positively bursting with gigs. After a year of hibernation Belsonic has returned, armed and ready with 7 different nights of music to showcase at their brand new home. After a shift from Custom House Square to Titanic Quarter in 2016, the much anticipated annual festival has set up camp in Ormeau Park to bring the people of Belfast music of all varieties. First up, Arcade Fire and the Kooks. Glitter and wellies at the ready folks, you’re in for a big one.

It couldn’t have been a more explosive start for Belsonic, kicking off with headliners Arcade Fire with support from indie boys The Kooks. With over a decade passing since Arcade Fire have graced us Belfast folk with their electric presence, this was a gig announcement that took fans by storm.

Formed in 2001, it wasn’t until 2004 Arcade Fire really came to prominence. A brief 3 year wait is nothing considering the splash the electric rock band from Montreal were about to make with their debut album Funeral (2004). Soon reaching critical acclaim, Funeral marked the beginnings of a musical journey for the 6 piece band that boasts awards from Grammys for Album of the Year to BRITs for Best International Group and Best International Album…all in 2011 alone.

If a cabinet filled with trophies ain’t enough to impress you, one need only look to the long line of instruments that help build the band’s glittering discography. Turns out what makes Arcade fire goes beyond the mere guitar and drums, with a viola, cello, double bass, xylophone, glockenspiel, keyboard, synthesizer, French horn, accordion, harp, mandolin and hurdy-gurdy (no judgement if that needs a Google search) all contributing to their work…to name a few.

Not only that, but the multi-instrumentalist band like to shake it up on tour, with no instrument designated to one member, instead switching duties throughout the show. It is this undeniable musical talent that has paved the way for Arcade Fire’s fifth album, Everything Now (2017), ready to make its mark in Ormeau Park.

A brief warning to all raring to feast their eyes and ears on what Belsonic has to offer – Ormeau Park is really big. Like…really, really big. We advise not running in blindly, excited with raincoat billowing behind you, lest you’re ready for a brief 5 mile power walk around the whole Park before you find your way. Do some investigating, mark out the coordinates on a map or better yet ask a kind stranger if they know where the entrance is to Belsonic. Otherwise, you’ll join the long list of people lost and confused in the albeit delightful wilderness.

Not to worry, though. Upon arrival you’ll be greeted with smiling ticket checkers, a Boojum bus (what a time to be alive) and a longline of bar stands. The crowd filtered in slowly as time progressed on opening night, with many scattered across both the grass and tiles beers in hand, Kooks and Arcade Fire tshirts at the ready.

It became evident there was no set criteria or age limit for the set ahead, with young and old gathering in the venue with no real urgency to push their way to the front. There was an incredibly chill vibe from the get go, welcomed by everyone who arrived as the skipped their way to the bar.

Hand in hand with the already established chill vibe came The Kooks, dandering on stage with ease. Hearts of fangirls/boys/men across the venue, evidently loyal since the band’s debut in 2006, melted as frontman Luke Pritchard exclaimed ‘hello you beautiful people!’ With absolutely no one exempt from the allure of his curly hair and charm, there was a casual drift to the front as the token British indie/pop band launched into a set covering a discography spanning more than a decade.

Beginning with Eddie Gun’s from their debut album Inside In/Inside Out (2006), it was incredibly evident from the very beginnings of the set that the Kooks have always been at home on stage. With frontman Pritchard continuously switching between guitar and no guitar, the rest of the band owned each song as he gyrated across the stage. Their energy was properly infectious, with the whole crowd making use of the space around them to move with every beat.

Pritchard’s sporadic movements were hard not to adore, with a smile across everyone’s face in the crowd as they sang every word to favourites like She Moves in Her Own Way and Seaside. It was the definition of dad dancing but it was so okay. It seems Luke Pritchard has cracked the secret, dads – get yourselves into a token British indie band and your dancing can too be admired and respected.

Despite minimal chat between songs, crowd interaction and participation never ceased. The band’s dedication to thanking the crowd in between every single song spoke volumes about how genuine and down to earth the 4 guys were, determined to stuff as many songs as possible into their set. The progression of the Kooks’ sound as they have grown over the years was showcased perfectly, with incredibly smooth transitions between old acoustic sounds to heavier, electric songs.

All four albums were represented to the delight of the crowd, demonstrating the impressive amount of years the boys seem to have just got it, no matter what sound they go for. As the band have grown it was clear the crowd that gathered have grown with them, dancing around as they embrace the nostalgic with the new.  They seemed genuinely appreciative of the crowd’s attention as well as opening for Arcade Fire, their energy infectious from start to finish. Wrapped up with a classic everyone was waiting for, the Kooks captured the whole crowd for one last singalong, launching into Naive.

As the brief interval between the two bands came to a close, the slight space available seemed to close as everyone made their way to the stage. By this point all bladders may be emptied and all cups may be filled as the crowd assembled and did not seem keen on shifting. Crowd in place,  one after the other Arcade Fire filtered on stage, with whatever space not taken up by a band member taken by one of their many, many…many instruments.

It was at this point of the evening the sun began to set as the lights got brighter and colours got deeper. Together with the haunting vocals of Win Butler and upbeat harmonies of the band, the visuals of the set created a perfectly hypnotic atmosphere.

Kicking off the set with the title track from their fifth album Everything Now, what followed was more than a mere set of hits. Arcade Fire delivered the whole package and then some. The perfectly timed lights, background visuals and intense connection with the crowd presented the crowd with the kind of energetic power that typically concludes a set, right from the first note.

The captured crowd permanently had their hands in the air as the band played favourites such as No Cars Go, the Suburbs and Reflektor.  Upon hearing the band live, it became clear that Arcade Fire go beyond simply producing mere songs, but exceptional pieces of music. This was an undeniably talented group of people on stage, getting together to produce amazing pieces of music that positively exploded around the whole Park.

Song after song there was absolutely no lapse in energy or sound, with constant chanting and constant, thunderous instrumentals, fluidly leading the way towards the next incredible piece of music. The band delivered more than a set, they delivered a show. As each member shifted between instruments the sun set further, with Regine Chassagne even whipping out a set of ribbons at one point that glided with the smoke in the darkness. As the ribbons fell, song Sprawl II diminished and the band made their way off stage.

It seemed even Arcade Fire aren’t too cool for an encore, but they are too cool to keep the crowd waiting too long. After about a minute the band returned, with Win Butler defining the band as ‘just a bunch of people in funny get ups if we didn’t have your energy so thank you so much.’

The band closed the perfect night with a perfect song, with a sea of hands under the dark sky welcoming the final single from their debut album – Wake Up. A powerful chorus of people literally jumped in from the first note, dominating the open air with shouts of every single word of the first song the band ever played in Ireland.

The band were sure to not abandon the stage without a promise to visit us again soon, sooner than 15 years like it had been before. The last note of the hit song brought an explosive finish, soon bringing a strange silence as the set concluded. Despite the silence, the atmosphere remained, a buzz still lingering in the air after the Kooks and Arcade Fire delivered an unforgettable night that will be incredibly hard to beat in Ormeau Park. Your move, 1975.

Scroll through our photo gallery, by Bernie McAllister, here: 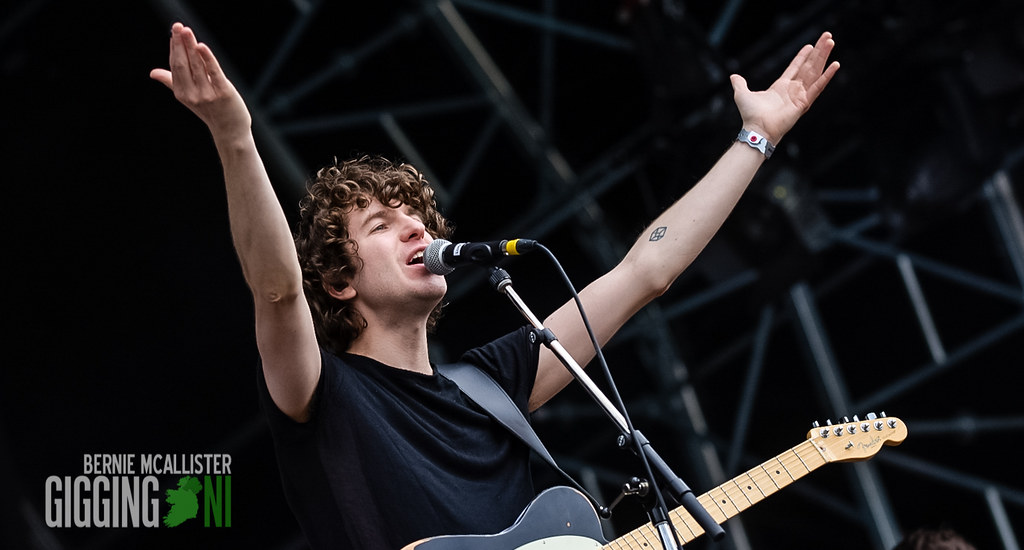