I was 16 years old when I first came across the pandemoniac explosive charge that is The Dillinger Escape Plan. I remember sitting at my computer when the title ’43% Burnt’ suddenly caught my attention in the sidebar. Little did I know that this encounter would open up a whole new understanding of music for me – the sheer brutality and technicality of that outburst blew my mind, its abrupt time changes and jazz breaks were unnatural to my ear. I was instantly hooked. A few months after, I got into the old Spring & Airbrake (now the Limelight 1) to see my new favourite band in action. The most vivid memory I have of that show is Greg Puciato (vocalist) animalistically lunging into the chaotic crowd and surfacing topless with blood across his face. I had never experienced such disorder in the flesh.

Here I am at 23 years old sitting in Katy Dalys drafting what I’m going include in the review and getting ready to photograph them. This will be the last time they are in Belfast as The Dillinger Escape Plan. Friends (I know, right?) will tell you that when this show was announced they heard the screeching fangirl squeal over the other side of town. As I sat at the bar waiting for the doors to open, you could hear the band soundcheck next door with their furious sound cutting through the walls. Thanks to James from the Distortion Project, I was able to watch the remainder of the soundcheck and get a preview of what was to come. Anticipations were high and so was the high-pitched tinnitus following just the soundcheck.

First up was Wicklow’s solo electronic artist Trenchurian. I was completely unaware of who Trenchurian was prior to the announcement, however his Soundcloud showcases his prolific output of original and remixed tracks that I became somewhat familiar with. On stage stood a platform of modular synths and drum machines that Trenchurian manipulated into a temperamental soundscape accompanied by interesting visuals. The experimental vibes I got from his sound were equatable to the likes of Aphex Twin, Telefon Tel Aviv, Squarepusher and the industrial IDM dance sounds of the likes of Front 242. Many punters in the crowd were warming up to punches, kicks and leads featured in his set, nodding their heads to the frantic beats and dancing in tribalistic fashion.

Lights went down and the sounds of cheesy 80’s pop came to a stop (fair play to who was managing the interval soundtracks that night!). The Dillinger Escape Plan made their way to the stage in single file, activating guitars and strangling the feedback as they waited for the right moment to begin. The mathcore champions erupted into ‘Panasonic Youth’ to a storm of strobing lights and the fierce reaction of the energised crowd going berserk below. As my fellow photographers did their thing, I found myself in a trance absolutely losing my mind to the crushing aural bulldozer that was making its way through the venue. I was in my zone. In retrospect, the start of the set was a photographer’s nightmare as the five photographers crammed into the thin pit clicked their way through the harsh lighting conditions. It was the biggest challenge of my gig-photography career thus far.

No one had a moment to catch their breath before the fan-favourite lyrics of ‘Prancer’ cut through the PA. “HOW COULD IT ALL BE” instigated further hysterics with Ben Weinmann (Lead Guitarist) bridging the gap between the stage and the barrier, swinging his guitar and getting into the fans’ faces. Crowdsurfers caught the sonic waves to its opening groove whilst the band relentlessly conquered the stage with their swift and aggressive movements. The set featured a selection of tracks from across their 20-year career from ‘Milk Lizard’, ‘When I Lost My Bet’ and ‘Sunshine the Werewolf’ to the most recent and anthemic ’Symptom of Terminal Illness’ and ‘Nothing to Forget’ from their final album Dissociation released late last year. To their most devoted fans, it was a feast of a setlist.

The highlights of the set were the unforgiving ‘Limerent Death’ led by Billy Rymer (Drummer) whose solitary opening drum fill triggered a riotous response in the packed small venue, as well as the unexpected inclusion of the destructive noise-fest that is ’The Mullet Burden’ from the band’s early career. The set ended just as it all started for me back when I was 16 – to the dissonant riffage and irrepressible behemoth that is the cult-classic ’43% Burnt’ (or on tonight’s setlist ’43% Turnt’). I stood at the side of the stage watching the band deliver the violent outburst, building up pressure before dropping into the final groove that closed the set in true Dillinger style. I experienced that disorder for the final time. 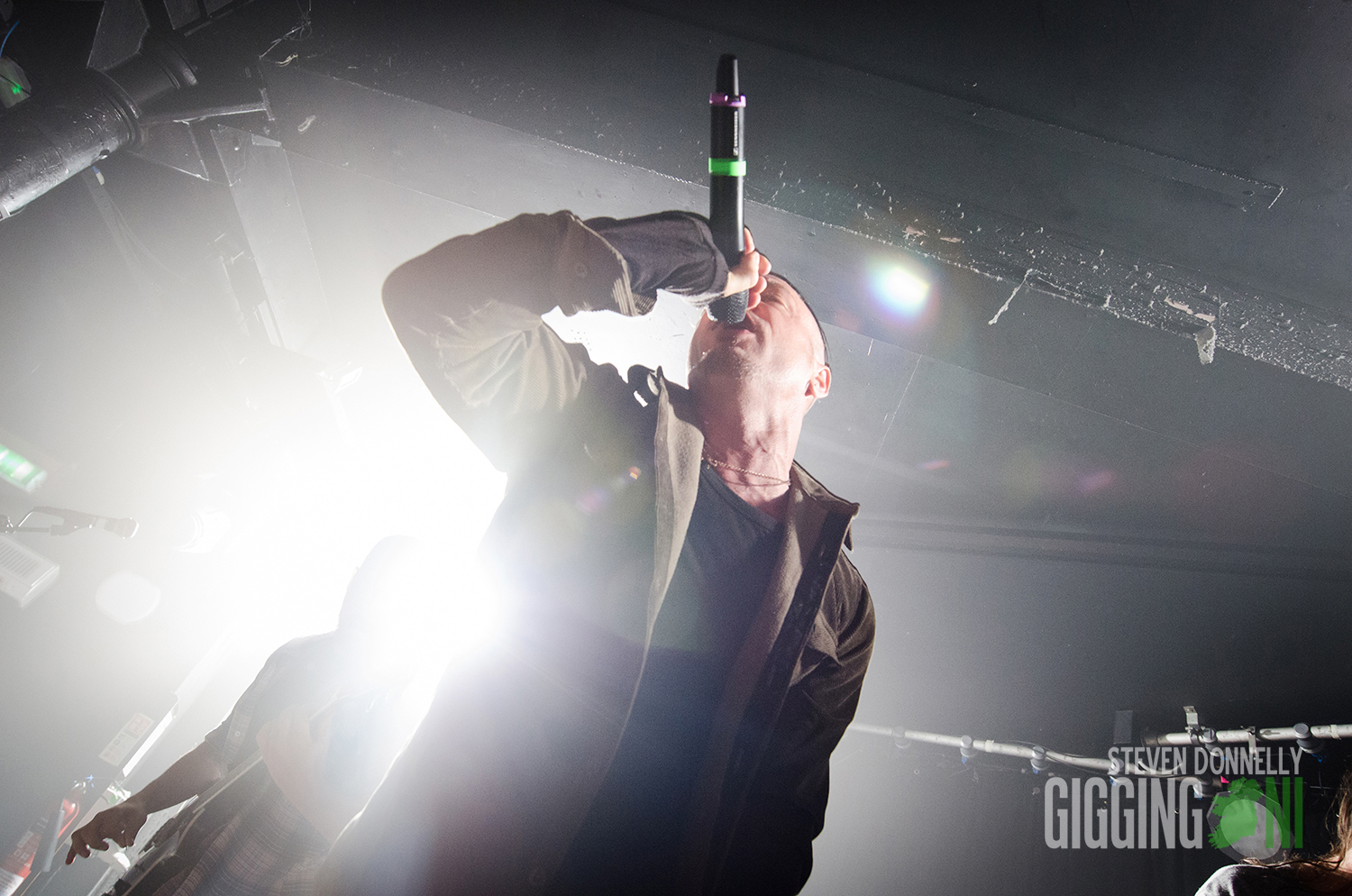