Since 2012, Nashville has grown to become a brand in its own right.  It has had its fair share of ups and downs including being cancelled and moving networks, but the fans have ensured the programmes unique take on country music has been kept alive and remained more popular than ever.  The cast brought their live show to the dedicated fans of Belfast on Tuesday night, proving why the programme is still going strong.

Not many series could put on a live arena performance and impress both diehard fans as well as those that may have never heard of the programme.  The night began with a dimming of the lights and videos featuring the cast.  The crowd went absolutely wild as each clip of the video featured a new actor – the cheers heightening as each new name appeared in front of us.

Suddenly Charles Eston (Deacon) boomed onto the stage and sang ‘Buckle Up’.  The crowd had not warmed up with a support act but they did not need it.  As soon as he belted out “I see you dancing around me like you got something to prove” everyone was singing along and enjoying the sudden burst of energy that filled the arena.

We were then met by the talented Chris Carmack (Will) as he walked onto the stage with his suave confidence stating, “It sounds like we got some cowgirls here tonight”.  Naturally, the women of the crowd responded to this with screaming as he went into his first song of the night ‘What If I Was Willing’ before breaking into his first EP track “Being Alone”.  He showcased himself as an extremely diverse artist throughout the night as he sang and played guitar whilst also reminiscing of his time filming the popular series The OC.  A huge surprise he brought to the set was his cover of Stevie Ray Vaughan, ‘Texas Flood’.  He demonstrated himself to be an extremely talented blues singer and guitarist – not just a pretty face.

Jonathon Jackson (Avery) was the third artist to grace the stage.  He broke into ‘Keep Asking Why’.  His performance on stage was very like his character Avery in the series as he has this incredibly chilled ease about him whilst performing.

Jonathon’s voice throughout the set was the main highlight for me.  His voice carried across the entire arena.  It was particularly noticeable during his cover of ‘Unchained Melody’.  The song was dedicated to his wife of 15 years and he belted this cover out that everyone simply sat and took it all in (possible shedding a tear).  Once he had finished this beautiful rendition everyone (or so it seemed) in the arena gave him a standing ovation as he looked on in wonder at the reaction he received.  It was no wonder Sam Palladio (Gunnar) exclaimed “How am I supposed to follow that?”.  Granted – it was an extremely difficult act to follow.

A further surprise of the night was when Sam graced the stage and did not have the recognisable Texas drawl we all came to love in the programme.  His English accent and platinum blonde hair had some of the audience scratching their heads as they questioned if this was really ‘Gunnar’ on the stage.  Sam’s performance throughout the set, however, proved that whilst the accent wasn’t there the raw talent certainly was.  His first songs were ‘I Will Fall’ and his very own track ‘Hello Heartbreak Blues’.

Once Sam had finished his original song the crowd eagerly awaited the presence of the beautifully talented Clare Bowen (Scarlett).  She floated across the stage in her flowy dress and the Scarlett trademark bare feet before singing my personal favourite song from the entire series ‘Fade Into You’.  The duet between Sam and Scarlett was truly beautiful as the chemistry we all love came to life on stage.

The entire night was filled with excitement and surprised.  The exhilaration of cast members jumping off stage and walking through the audience to Clare Bowen’s heart-warming speech about love and kindness.  She articulated, “The world needs one of those right now. One person cannot save the world alone but if we stick together we can make little corners of it glow with love and compassion. Love will always conquer fear.”  This added an entirely new dynamic to the set as it was not all just fun and games – these people were on stage singing about things they believe in, not just hits from a TV series.

I think if anyone were to ask me about Tuesday night I would have to say even if you have never seen or heard of Nashville, you need to see this show.  It is so much more than just a way for fans to belt out their favourite country tunes.  It is a stage filled with incredibly talented musicians that prove they can sing more than the hits we all know and love.  It was a fantastic night from start to finish – now I’m off to binge watch from season one. 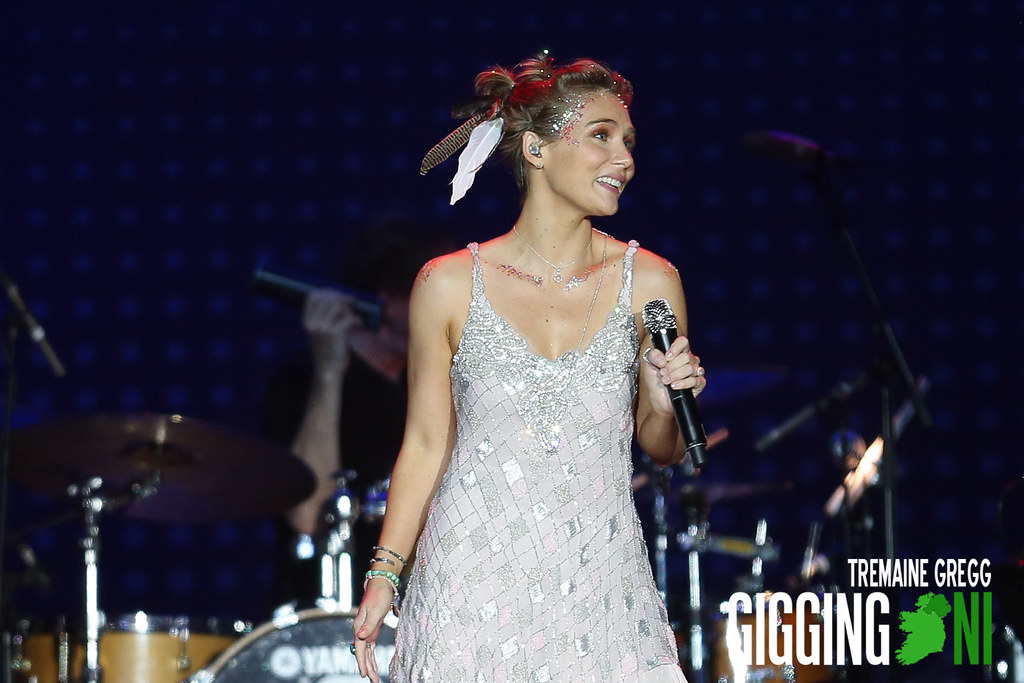