There’s an art to a tribute band – as audience members we know we aren’t seeing the original artist, but for our knock-down ticket prices, we still hope to be entertained and something of the feel of the genuine article to be served to us in the audience. The Rolling Clones have been doing just that since 1999 – dishing out a slice of camp rock to fans of the leviathan band, to deserving applause.

The Belfast Empire already has a small crowd waiting as doors open this balmy summer evening. In the two hour window (!) before the band takes to the stage, the room fills comfortably. An audience leaning towards those in their 50s and 60s, many sporting Rolling Stones branded t-shirts. But there are younger interlopers as well – such is the broad pull of the Stones.

Bounding on stage, the Clones prove themselves an affectionate parody of the Stones, somewhere at the end of the 1970s, early 1980s. The classic line up of Mick, Keith, Ron, Charlie and Bill is represented with varying believability. Mick parades around the stage, his pouting pronounced, arm in the air. Keith and Ron shred their guitars and banter between themselves, and with Mick. The camaraderie is infectious – a little reminiscent of the humour  on Love You Live, but to more ridiculous extremes. Mick, a man ready to shoot his load as soon as a girl looks at him; Keith loaded with class A substances’ Ron trying to work out if he’s ever going to escape his probationary period as the new guitarist. They’re taking the piss, but with knowing winks, and the whole thing is easily forgiven and embraced.

On stage they give us the sort of show few are likely to ever witness – up close and personal. Stand a little way back from the stage, squint through the beer goggles, and its even possible to be deceived a little by this band of avatars – only the jarring appearances of Bill and Charlie throw the game somewhat. Vocally, the imitations are strongest in the spoken word moments, and it helps give an extra layer of perceived authenticity.

They tear through a two-hour set of classic Stones tunes, and even then still barely break the ice. We’re reminded just how strong the Glimmer Twins’ songbook is, exceeding that of the Lennon-McCartney partnership. The pace is relentless, with the rockier numbers providing the thrust. While “Start Me Up” opens the show, the choices cover the first 25(ish) years of the Stones – everything from “Paint it Black“, “Sympathy for the Devil“, “Its Only Rock N Roll“, “Miss You“, “Honky Tonk Women“, “Brown Sugar“, “Satisfaction” – all put Mick to the front and get the audiences on their feet. Keith takes centre stage for a ramped-up take on “Happy“, and even the most recent LP Blue and Lonesome gets a look in with a fine rendition of “Ride ‘Em On Down“.

I’ve grumbled in the past when a tribute show doesn’t deliver a comprehensive overview, but the Rolling Clones don’t need to. As much as I’m a fan of their material from Voodoo Lounge to the present, their interactions, costumes and set place this firmly in a classic Stones era and with tongue firmly in cheek they deliver the goods. With actual Stones tickets these days retailing for in excess of £100, the mere tenner it costs to catch the Clones is well spent.

Scroll through our photo gallery, by Robert JE Simpson, below: 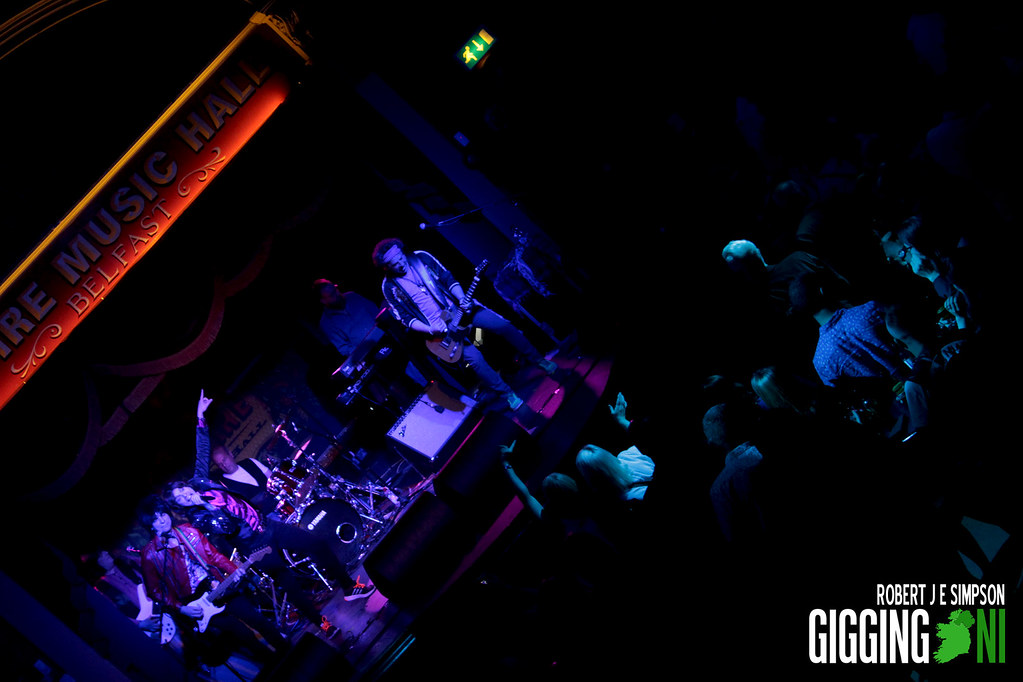