It’s been four years since Kate Nash graced Belfast, her last gig in the now defunct Stiff Kitten where she came over all Riot Grrrl and was a total departure from her poppy earlier incarnation. Tonight is largely a different scenario. In Belfast’s Limelight 1 venue, the second night of the ten year anniversary tour of her debut album ‘Made of Bricks‘ is about to kick off.

On crowd warming duties are American three piece Skating Polly. Sounding like a teenage dream band of mine, they are Veruca Salt in one moment, Hole in another, Belly in the next. In short, if you like your music with a touch of grungy rock, with an angelic voiced female singer and songs you can sing along to then they are right up your street. With songs like ‘Louder in Outer Space’, ‘Hail Mary’ and ‘Stop Digging,‘ they transport you back to the best of 90s girl bands and it’s easy to see why they are tour mates of Kate Nash.

The stage is set for Ms Nash, with cherry blossom trees, streamers and inflatable clouds and when she finally arrives she is resplendent in red glittery crop top and pants and a wispy chiffon puff of jacket. It looks heavily inspired by her character Rhonda (Britannica) in Netflix’s recent creation GLOW and puts a distance between Kate Nash, the artist, now, and Kate Nash in 2007. Still, when she teases with the opening verse and chorus of ‘Foundations,‘ we are transported back to those days when life was simpler and we were all younger and more fun.

‘Mouthwash‘ has us all singing (oh oh on a Fri…sorry) along in Mockney. These songs are familiar and warm and everywhere in the crowd people are singing along with unbridled joy, filled with nostalgia. Nash instructs the crowd to think of a ‘special’ person for the next song, ‘very special’ in fact and launches into ‘Dickhead‘. It takes on a punk feel with Nash spitting the lyrics furiously and although the lyrics are slightly puerile they are ever relate able. We all know a dickhead right?

Strapping on an acoustic guitar she plays ‘Birds‘, a pretty little story about young love and the audience are captivated, singing along with ever word and its a lovely moment. Followed up with ‘We Get On,’ it’s something of a slow down in the set and her voice shines over the stripped down guitar. On ‘Mariella,’ shes back behind the keyboard and raucous while her band have a bit of a dance off with the crew at the side of the stage. ‘Pumpkin Soup’ is a favourite with it’s laid back groove and catchy chorus.

The audience have been rowdy Roddys’ and chatty Cathys’ all night and so when things are quietened down for ‘The Nicest Thing‘ some gig goers don’t take the hint to pipe down and stop shouting for ‘Foundations’ and a slightly frustrated Nash retorts with ‘All right, just let me get there, we know we are all here for that, so shut up and let me get on with it’. Nevertheless she persisted and ‘The Nicest Thing’ is highlight of the night, wistful, earnest and as heartbreaking as it was ten years ago and without a doubt highlights her superb song writing skill of cutting right to the bone. ‘Basically I wished that you loved me’ is like a stab of honesty right in the feels of anyone who has ever been in an unrequited love situation.

Kicking the mood up a notch with ‘Doo Wah Doo’ confetti cannons go off sprinkling us all with colour and adding to the party feel of the gig. ‘Little Red’ a hidden song on the album and is reminiscent of Regina Spektor with the piano lyrics and rhythm of it – a meander through Nash’s youth. Finishing, finally, on ‘Foundations‘, which the crowd have been anticipating all evening is a wise move and the pay off? A massive sing along in Mockney accents yet again. Although it is 10 years on, the song’s simplicity makes it stand the test of time and it’s clearly etched on all our hearts, taking us back to a certain time, person or place. Nash herself references this when ending the show, about how music can make you look back at a certain time and feel certain things and see how far you have come.

Leaving the stage she returns with full band again to play more recent music it’s clear to see how much she has grown as an artist. ‘Agenda‘ is a slice of politically charged pop with a hint of M.I.A and it seems that living in America has expanded her sound and social conscience. Although it sits somewhat uncomfortably in the Made of Bricks set list it’s different,experimental, fresh and doesn’t turn the crowd off completely. The awkward, heartbreak and self consciousness of Made of Bricks to the now politically astute and grown up Kate Nash perfectly represents the changes that we’ve all gone through over the past ten years – it’s been pleasant to walk down memory lane but I wouldn’t want to be back there.

View our full gallery, by Conor Kerr, by clicking the image below: 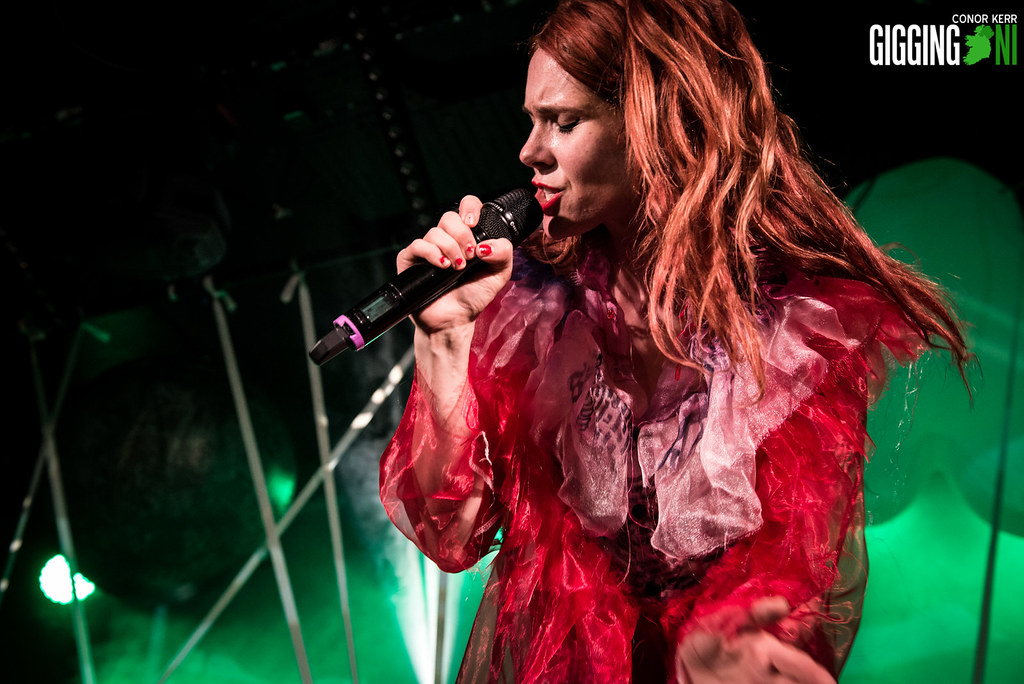