Well folks, Summer is almost over so that means the young bucks have got to go back to school; wah! But for us adults we have nothing to worry about thus meaning many of nights out for us, especially this night. A night that was full of pure metal courtesy of James Loveday of The Distortion Project and a band who are considered pioneers of the death metal genre; the legendary Possessed.

Kicking off the night were Neamnhi, one of Belfast’s rising bands in the black metal genre. As the mass of musical gear covered the small Voodoo stage this allowed the heavily corpse painted lead vocalist Alessandro Rocco to unleash his huge presence onto the venue’s floor, calling all the heathens in attendance to the front. Performing tracks off their debut EP ‘Vermin,’ the lads led an all out storm that would have made it seemed like they were headlining the night’s proceedings.

While the night’s headliners are considered pioneers of the death metal genre, it’s the main support Overoth, who for over a decade have defined the genre in Northern Ireland. With the new album ‘The Forgotten Tome’ to be released at the end of September 2017, these local veterans’ set was full of tracks off the album with ‘The Keeper’ and the Earth shaking ‘Shadows In A Thousand Shades Of Black’ being the highlights of their performance. Overoth continued to prove that they are a force to be reckoned with all thanks to a thunderous performance and an excellent sound mix, which can be pretty hit and miss in this venue.

As the dust settled thanks to the local support acts and the Satanic banners engulfed the petit stage, it was time for the iconic Possessed to hit the stage. As the band, coated from head to toe in spikes, leather and pentagrams took over the stage it was when the leader Jeff Becerra himself got wheeled onto the stage was when the Belfast crowd awoke as they prepared for an all out demonic war. The band may have looked menacing and the lyrics may have been dark but this didn’t stop Becerra smiling from ear to ear as he told those in attendance that ‘this is my type of gig’ as he took time between each song to tell the song’s backgrounds plus have some fun with the rowdy crowd; especially about how Americans talk about having Irish in them to which he believed he was three quarter Irish.

Considering the guys have just come off a performance at this year’s Bloodstock Festival plus a performance in Dublin the night before, they did not seem tired at all as they blasted through an extremely tight performance that was full classics (who needs new material?) from ‘My Belief’ to renowned ‘The Exorcist’ and ‘Seven Churches,’ tracks that seen heads flying off shoulders all thanks to the non stop headbanging from the Belfast crowd.

Nothing beats a night full of old school metal and that is certainly what was provided here. While I am by no means the biggest death metal fan I was completely blown away by the talent that was on show here, from both the local talent and the veterans.

View our full gallery, by Marc Leach, by clicking the image below. 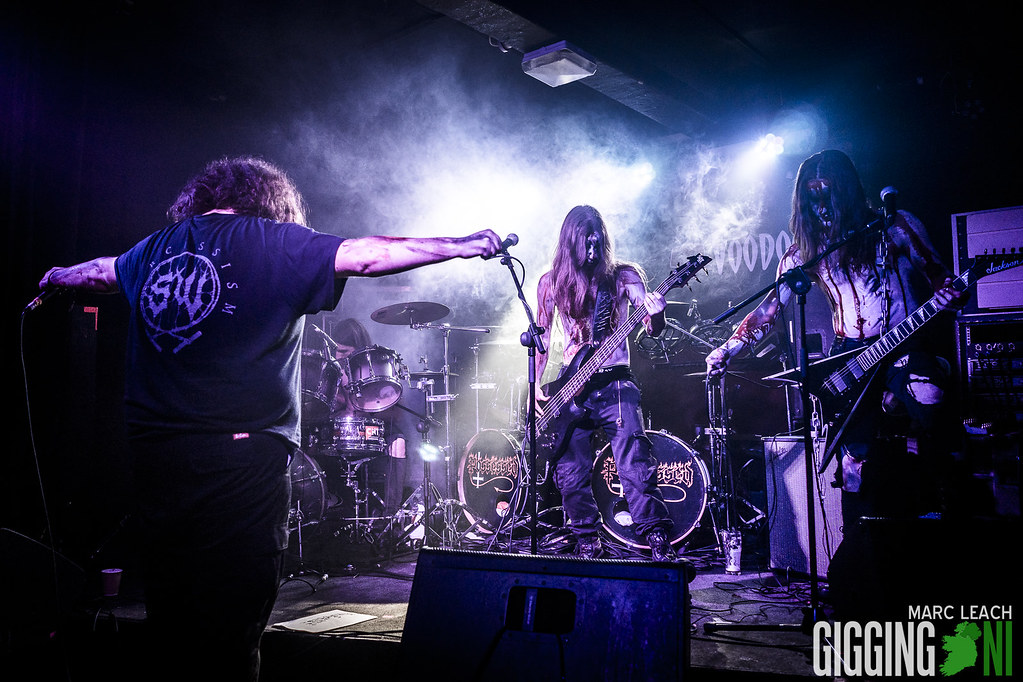