Now in its seventh year, Limavady’s Stendhal Festival returned to Ballymully Cottage Farm this weekend for two days of music, art, poetry, theatre and comedy. The event takes its name from the syndrome first described by French author Marie-Henri Beyle in 1817 – the experience of being exposed to “an experience of great personal significance, particularly viewing art”. Stendhal Festival, like its namesake, encapsulates the full spectrum of creativity experienced by humans, and boasts a line-up of too many incredible acts to be enjoyed in a mere 48 hours. As Ireland’s best small festival, our finest local talent – coupled with some UK acts and those from further afield – flocked to the County Derry countryside for what was to be Stendhal’s busiest year yet.

As campers make their way to pitch (read: wrestle) their tents, the dreamy, 80s-infused pop rock of Beauty Sleep fills Ballymully whilst festival-goers are still arriving late into the afternoon. Tracks ‘The Dark’ and ‘All In’ hint at much bigger things for the Belfast trio. Followed on the Stevie Martin Stage by Derry upstarts Susie Blue, fresh from Glastonbury, a small crowd of friends and fans has gathered for their set. Characterised by impressive riffs and a tight rhythm section for such a young band, frontwoman Susan Donaghy leads chants of “They don’t like people like us, they don’t like us!”, can of Coors Light in hand. Not to be outdone by the professionals, the mini Sign Up Stage offers a free drink to any festival-goer who can play a song, and it’s proof that Stendhal fans are in good company – but it’s no karaoke fest: bona fide acoustic covers of popular hits attract small crowds from the faerie garden.

Music and art marry with the pop-up art galleries dotted around the place, enjoyed by families and revellers alike. The festival site is a myriad of wooden huts and stalls and bridges leading to beautifully decorated woodland areas, the venue for Goldie Fawn’s set. The Woodtown Stage is situated under colourfully crocheted trees and a billowing canopy, surrounded by wooden stools carved into the shape of mushrooms. Armed with synthesisers and a whole lot of glitter, they create wistful yet upbeat electropop peppered with cascading harmonies, which sounds especially good in the evening’s atmospheric venue. They’ve even pinched members from Beauty Sleep, Son of the Hound and Woodtown headliners No Oil Paintings to make up their band.

On the same stage is ROE, who almost halts movement on the bridge with the swarm of people she draws. She is an engaging performer and surely at the pinnacle of the Derry music scene; her unique vocal tone soars and plummets, creating a striking contrast between her quieter numbers and more guitar-driven ones. She plays with maturity beyond her years and has a big sound for one woman with an electric guitar and drum machine. Her captivating electro rock is even better live than on record, highlighted by an evocative ‘Playground Fights’.

When it comes to singer-songwriters on Friday’s line-up, Rosborough and Paddy Nash top the pile. Rosborough is extremely personable and his lo-fi set in the Woolly Woodland area (usually reserved for electronic acts) showcases his enchanting tones, not unlike those of Wicklow troubadour Hozier. The latter performer is a Stendhal veteran who appears well at home on the Karma Valley Stage, even without his band of Happy Enchiladas. The Americana-infused folk he plays, complete with signature rasping vocals, invites singalongs and a positive anti-Trump message on ‘You & Me Both’.

Early evening ravers are treated to a vibrant set from AVA Festival’s Ryan Vail, before hotly anticipated headliners Ash take to the stage. A mighty ‘Goldfinger’ emanates across the farm early in the set, courtesy of the Downpatrick rockers and 90s icons. Their fiercely catchy pop punk anthems take many back to their youth, as hits like ‘Girl From Mars’ and ‘Oh Yeah’ – interspersed with newer tracks like ‘Arcadia’ – are yelled back at them amid a sea of raised beer cups. In a nod to Stendhal 2014 headliners and punk legends The Undertones, Tim Wheeler launches into an ecstatically-received ‘Teenage Kicks’ with the quip: “We couldn’t be this close to Derry and not play it!”. Undoubtedly a Stendhal highlight.

For the less rock ‘n’ roll-inclined, the Homespun Soundsystem DJs play classic funk, disco, R&B and pop under the colourful trees of the Woolly Woodland for easily the coolest party this side of the Bann. An unfortunate clash is with Queen tribute Flash Harry, an unashamedly fun act who lure some revellers away from the woodland disco. Knocking it out of the park with one of the most entertaining sets of the weekend so far, songs like ‘Radio Ga Ga’ (complete with hand actions) have everyone dancing, in spite of the rain. Frontman Harry Hamilton has Freddie Mercury’s voice and mannerisms if not looks, and his band does the original more than justice.

Those prepared to brave the cold and stay out late are not disappointed by Karma Valley headliner Jealous of the Birds. Despite a delayed start, eager fans line the barrier to see the brainchild of Naomi Hamilton, who has come a long way since her 2015 EP Capricorn. She emerges adorned in a trench coat and tribal face paint and her setlist mixes grungy tracks like ‘Trouble in Bohemia’ with her mellower releases such as ‘Tonight I Feel Like Kafka’. In a moving final touch to Friday’s events, A Set for Stevie, named after Stevie Martin AKA Rainy Boy Sleep, is put together in memory of the young Derry singer-songwriter who passed away last year. Local names including Susie Blue, Ciaran Lavery and Rosborough play an emotional setlist of Stevie’s most memorable songs as campers head back to their tents after a jam-packed day.

Trying to put hangovers and a sleepless night behind them, a sparse crowd of early risers gather for Brash Isaac’s set on the main stage. Their take on folk rock, rarely short of a radio-friendly chorus, has earned them an upcoming headline gig at Lavery’s in Belfast this October, as well as a fan in Joshua Burnside, who smokes and watches intently from the grass. ‘In the Dark’ sounds just as good as when GiggingNI first heard it in Elmwood Hall. Following a folked-up set from Anthony Toner in the woods, Dublin four piece Mongoose combine guitar, keyboard, drums and cello to create a melting pot of genres. Their atmospheric folk has a twist to it, merging hypnotic harmonies to create an almost choral quality. They play with unsmiling intensity yet giggle between numbers, certainly making their Stendhal debut a unique one.

Worth a mention are some of the grassroots acts who graced the Oh Yeah/Nerve Centre Stage, with the support of Northern Ireland’s leading creative media centres. Fiona O’Kane, who performs under the alias LARKS, is a hidden gem who deserves a much bigger audience. Her electronic beats and brooding piano coupled with echoic vocals are simply entrancing; silence falls over the tent for her composition ‘Tired Eyes’. On a slightly different note, Castlerock indie pop rascals Brand New Friend put on the headline show of their lives, a high-octane gig complete with stage invasion and a packed out tent chanting back every word. Exciting things in store, without a doubt.

It’s hard to stand out in a line-up so full of acoustic acts, yet Joshua Burnside does just that. His afternoon slot is charmingly intimate, with fans sitting literally at the foot of the stage. A truly special talent, his brand of alt-folk with a local accent makes for one of Gigging NI’s favourite acts of Stendhal 2017. His live show brings a new dynamic to his debut album Ephrata, adding theatrical touches, trumpet and even his brother Connor on drums. “I’m going to play a controversial one for you,” he laughs, introducing anti-DUP bigotry ode ‘Red and White Blues’, “I think I’m in the right part of the world for this.” Burnside’s lyrics – often politicised, but not always – tell a story and his songs linger in the mind of the listener. The enthusiasm of his fans earns him a standing ovation and demands for an encore, to which he returns without his backing band. The rapport between performer and audience is uplifting, and the County Down native seems genuinely moved at how his numbers have increased since last year’s gig at the same festival.

As anticipation builds for Saturday night’s headliners, deep house and ear-splitting techno gets underway in the Woolly Woodland, courtesy of Celtronic acts Phil Kieran, Deep Fried Funk, Or:la and Darren Allen (underage festival-goers are promptly ushered out by security, much to their chagrin). Across the site, Irish trad legend Sharon Shannon gets everyone moving with her infectious accordion tunes and a wonderful rendition of Steve Earle’s ‘Galway Girl’ to close her set, having played on the original recording.

Later that night on the Karma Valley Stage, NI Music Prize winner Ciaran Lavery asks if everyone is still hanging in there for his post-midnight headline show. He opens with new single ‘Everything Is Made to Last’, establishing himself as an unflinchingly intense performer and a true perfectionist of his craft. Playing with a band as opposed to just his guitar, fan favourites ‘Shame’ and ‘Left for America’ have a rockier edge and fuller sound. A Bonnie Prince Billy cover ‘Bad Man’ is thrown in, showcasing the Aghagallon musician’s incredibly distinct vibrato and powerful, husky vocals. A stunning ‘Return to Form’ closes Stendhal Festival for another year, and is almost mesmerising enough to distract thoughts from the dreaded task of dismantling tents in the morning.

Click on the image below to view our full gallery of Stendhal Festival 2017. 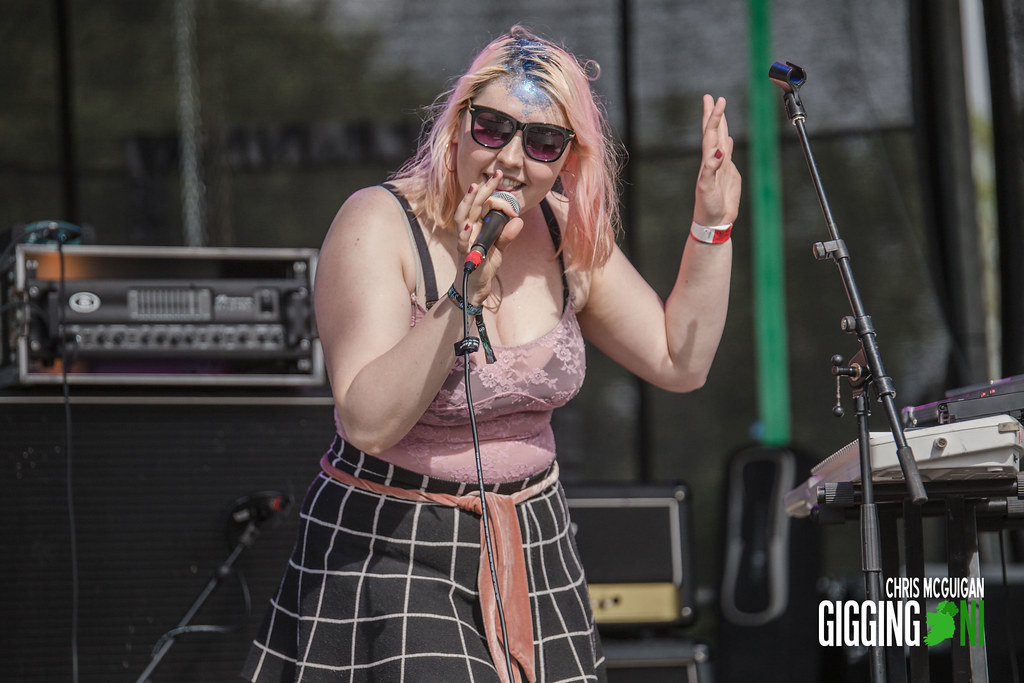 Harmony Live, Holywood – The Little Festival That Grew and Grew