It has been a good summer for the punk scene in Belfast. In June, Green Day returned with guests Rancid, as part of Belsonic. Last Tuesday night fresh faced Derry-Londonderry punk band Touts, shared a stage with Blossoms (almost Kasabian too until they cancelled last minute.) And to top it all off, last night saw the reunion of four punk bands who have been friends since the inception of their musical careers back in the late 70’s. And judging from the amount of bald heads at Custom House Square (as almost all the of the bands remarked on) – it wasn’t just a reunion for the artists, it was very much a reunion for those fans who have been with them from the beginning too.

Ulster has a rich anti-establishment punk history and Stiff Little Fingers are pretty much Ulster’s punk veterans at this point. While the concert was celebrating SLF’s 40th anniversary, each supporting act in the lineup attracted a very decent, excited crowd. Rather than being an afterthought, the support acts were as much a crucial part in the evening as the main headliners. As SLF frontman Jake Burns said in an interview with GiggingNI, “It’s like getting a whole bunch of your old mates together to play.”

The Outcasts were first on the bill and contesting to the surprise of such a big crowd for a support act, their frontman Greg Cowan remarked “Is that you Belfast? I thought it’d only be the burger men watching us!”

Opening with “Self Conscious Over You,” there’s a sense of familiarity that goes beyond the familiar Belfast accent greeting us. In fact, the protagonist “Jonny Hall” who The Outcasts sing about in their second song “Magnum Force” is actually, oddly enough, written about my uncle. So that gives an idea of the familiarity and connectedness that comes at a gig like this. Indeed, as Cowan scans the crowd  and picks out faces that he knows, there’s a real sense that so many in the audience has their own story or connection to the bands in some way.

Their energetic set is chock full of rasping guitars and even raspier vocals as the band perform a number of their singles such as “Justa Nother Teenage Rebel” and “Seven Deadly Sins.” There’s no lack of banter and this continues when Ruts DC make their way on stage.

“Are we in punk heaven?” frontman and bassist, John “Segs” Jennings asks before getting stuck into their first song “Surprise.” The preceding frenzied energy and rougher sound of The Outcasts set is toned down a bit with Ruts DC adopting a sound more akin to rock n’ roll. As their set continues however this is paired off with their reggae influences.

“People ask what punk is about, this is what it’s about” Jennings says before performing their 2016 single, “Music Must Destroy.” While it’s a contrast to the nostalgia driven performance from The Outcasts, the anthem-like chorus has a definite nod to the band’s punk roots.

Contesting to the history that these bands have lived through, namely ‘The Troubles’ in Northern Ireland, Jennings states how “Suspect Device changed our lives. We didn’t know what was going on here. We weren’t even allowed here.”

There’s been a decent crowd so far but with The Stranglers imminent, there is a definite upsurge of excitement and numbers in the audience. Their wordless entrance on stage erupts in screams and shouts of joy. Without any delay they kick off their set with “I Was a Toiler.”

The Stranglers’ very distinctive, textured sound relies heavily on sweeping instrumentals that include Doors-esque keyboard melodies, heavy guitar solos and plenty of more experimental, almost futuristic sound distortions. At points they couldn’t sound more different from the rest of the line-up then at other moments, such as their attitude-dripping performance of “Peaches,” that punk influence is very perceptible.

This textured sound makes for a very dynamic set, where the band perform hits such as “Get a Grip on Yourself”, “Nice n Sleazy” “Five Minutes” and “Walk On By.” Oddly, their best known song, “Golden Brown” falls a bit limp. Perhaps it’s the fact we all know it by heart or how the slower pace jars slightly with what has been a very fast paced, energetic gig or maybe the band themselves have just heard it too many times.

A particular highlight of their very strong set proves to be the festival perfect hit “Always The Sun” the chorus of which proves almost impossible not to sing along to like seemingly the entire audience.

There’s a slight delay in the headliners coming on-stage and the impatience in the crowd is palpable. Before the main men even walk out there’s a build up of chanting from the very eager audience.

Eventually however, they walk on stage to deafening cheers of joy and without preamble start into the belter “Wasted Life.” It’s immediately striking how Jake Burns has managed to maintain those raspy, punk vocals that the band is so well known for. It’s easy to tell the early hits from the more recent ones he performs – the vocals become less raspy in the latter of the forty year career.

It’s only after three songs that Burns manages to get a word in. “It’s so great to be home” he remarks which is obviously met with cheers, but a man close by can be heard shouting “Why don’t you live here then” showing a bit of animosity towards the fact that the band now reside in America.

“Forty years,” he says with disbelief “you’d get less time for murder.” In the course of their set they work their way through many of the classics but Burns makes a point of explaining that he wants to play one of his more recent songs, the anthem-like “My Dark Places” about fighting depression.

When you’re celebrating a forty year milestone you’d expect there to be a few stories to tell. Getting an insight into the stories behind the music is one of the superb aspects of this gig. Mentioning how when the band “ventured over the wire” to London in 1978, it was an inevitability that if you were an Irish band you would end up drinking with Phil Lynott at one point or another. The song “When We Were Young” is about meeting Lynott. It has poignancy due to the sadness surrounding Lynott’s death at a young age, it’s a bittersweet performance and a reminder of how lucky the band are to have reached such an incredible milestone.

It’s well known that Stiff Little Fingers came about during the height of The Troubles in Northern Ireland – they wrote their music as an antidote and a call to stop the division and destruction happening in their city. While things in Northern Ireland have gotten much better since the band got together in 1977, guitarist Ali McMordie shows that their punk roots are still very much alive and there’s always something to fight for as he talks about Northern Ireland being the only place in the UK not to have equal marriage rights for the LGBTQ community. “Barbed Wire Love” is dedicated to the LGBTQ community in the hope that soon Northern Ireland won’t be “the laughing stock of Europe.”

There’s no doubt that this gig evoked many memories for both the artists and the dedicated fans who came to see them. There was the risk that the night would be entirely a nostalgia trip but there was an ideal level of new material leveled out with getting to hear all the classics that have become so beloved in Northern Ireland. Burns said they might not get another forty years “but here’s to the next few!”

Click on the photograph below to see our full gallery by Bernie McAllister: 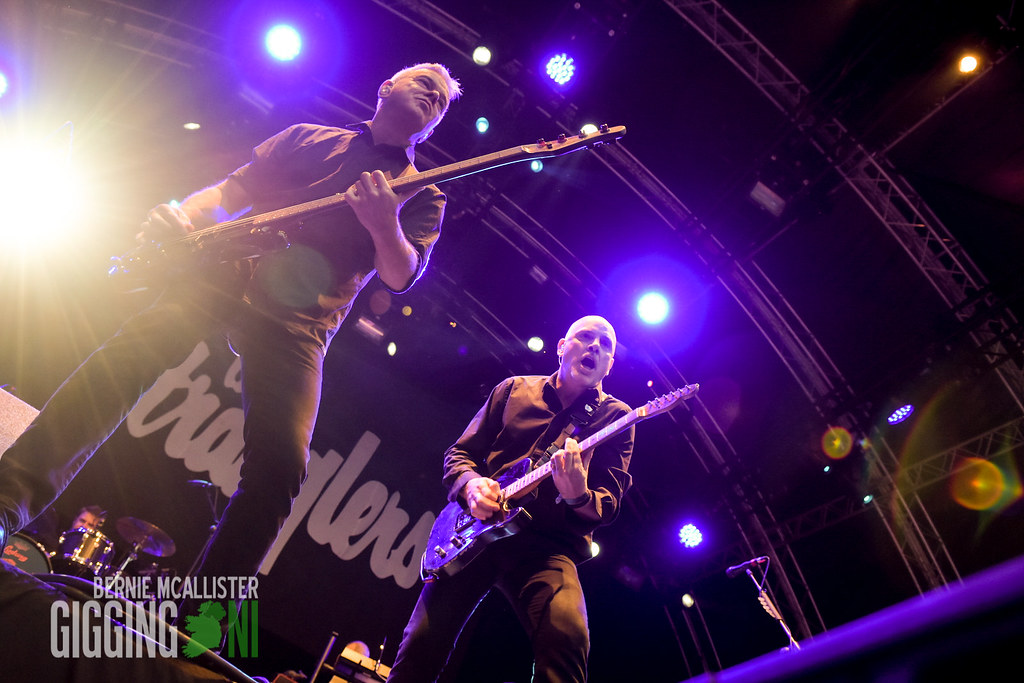