At the beginning of June 2017 Flogging Molly released their latest album Life is Good. The band have been on tour since, rounding up a summer of European shows with a celebratory gig in Belfast. While the Celtic punk band are almost home they show no signs of slowing down, finishing off their tour in high spirits and smelly clothes.

Support tonight comes from Dublin band Blood or Whiskey. Much like tonight’s headliners, Blood or Whiskey blend punk with Irish traditional music. “Never Be Me” sees the introduction of ska elements to the wonderful mixture.  While some songs have a definite “two tone” vibe, the trumpet is employed in a more solemn way during the opening of “Emigrant”. That said, the band soon have the crowd joining in with what feels like it is shaping up to be a great party from early on. Before beginning “Poxy Pub” they engage the Limelight in a lyrics lesson so they can sing along with this love song to a good bar.

“There’s Nothing Left To Lose Pt 1” begins to play over the sound system. As the Irish-American band make their way on stage, Dublin born Dave King takes up his microphone finishing vocal duties for the introduction. As per running order on their new album Life is Good, Flogging Molly launch straight into the rousing “The Hand Of John L. Sullivan”, a tribute to the Boston Irish boxer.

When he takes breath to address the crowd, the first thing King does is apologize to the people in the front rows for the smell. As the band come to the end of their tour, fresh clothing has run out and all he is left with is a jacket that smells like “Satan’s balls themselves”. He dedicates the next song, “Selfish Man” to himself on this account.

Seeming intent on sending the rest of the room into a similarly sweaty and smelly mass the band dedicate “Drunken Lullabies” to a fan they met earlier in the day. While the seven piece may be “suffering death defying hangovers” themselves they are in no mood for the party to stop. If there is one thing that cannot be bottled it is the atmosphere in the room tonight.

The set is interspersed with anecdotes; as he scans the audience’s t-shirts King proclaims himself a Ramones, NOFX and Chuck Ragan fan. Muse, not so much but, “sure that’s what [music] is all about”. He spots someone who looks like his childhood hero George Best and, upon finding out it is their birthday has the band and crowd sing to them. None of this feels forced. As the craic continues to flow, the gig begins to feel more and more like one of those nights that will turn into a “you should have been there” tale.  As King grabs a Bodhrán and dances across the stage during “Tobacco Island” the audience sing “Olé, Olé, Olé” at volumes that could challenge a sports stadium.

Fan favourites “Rebels of the Sacred Heart”, “Devil’s Dance Floor”, “If I Ever Leave This World Alive” and “What’s Left of The Flag” follow in quick succession. As the band beam out at the crowd surfers and sea of hands King declares, “It’s a long, long time since we been in Belfast. Lets hope it won’t be as f*cking long next time.”

Calls for an encore are met with sincere thanks as Flogging Molly play brand new track, “Crushed” followed by one from “where it all began”, “Swagger”. The party atmosphere shows no sign of subsiding as fans continue to sing along with “Always Look on The Bright Side of Life” as Flogging Molly leave the stage. King “couldn’t think of a better way to end the tour” while fans tonight couldn’t think of a better way to spend a Monday, or any night.

Click on the photograph below for our full gallery. 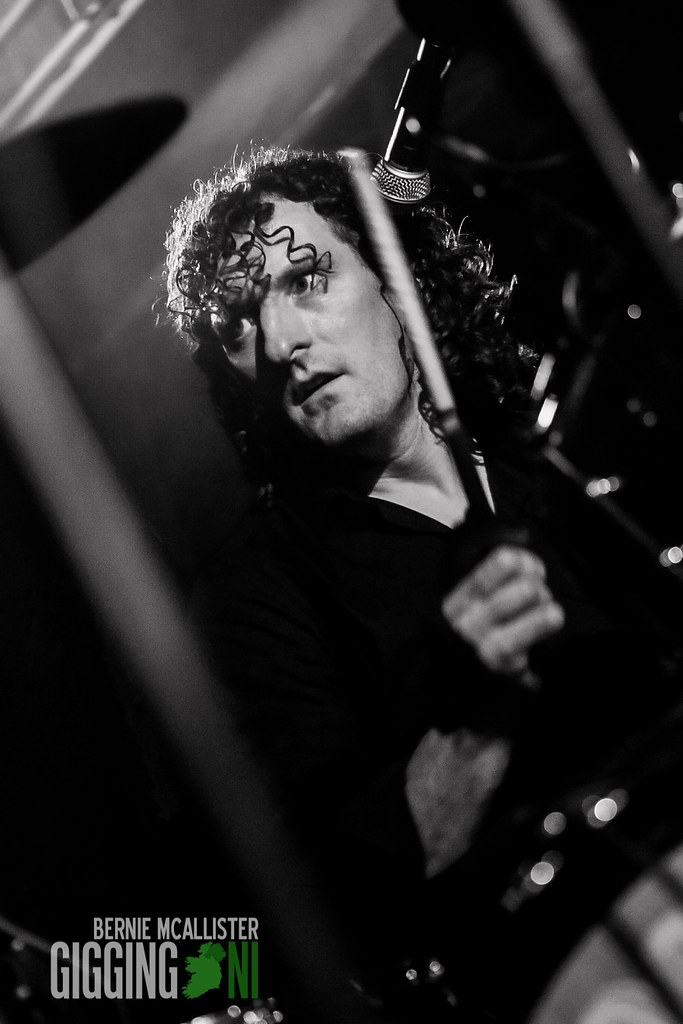