After the surprise announcement delivered to a spellbound Belfast crowd back in June, hard rock phenomena Alter Bridge returned as promised to the Ulster Hall in support of their extended The Last Hero tour. After playing two goliath gigs at the Royal Albert Hall with a 52 piece orchestra earlier in the week, it was clear that this small and pokey venue was just another day in the office for the Florida rockers but for everyone else it was a unique and irreplaceable experience. As a lifetime fan, I reluctantly watched many an Alter Bridge-less years drift by with still no sight of my favourite band making an appearance; it was looking like they were never to grace our often gig forgotten country. Little did I know they’d play not one but two sold shows in our capital in the space of four months. I was truly in my element.

First to the stage was the London formed rock band As Lions playing the songs from their 2016 debut album Selfish Age. The stage was darkness and tension. Immediately the wailing of sirens broke the silence and flickers of light bathed the hall in brilliant brightness with backbreaking bass shaking every bone in your body. It was evident from the offset that this band were full of energy bringing with them all that’d you’d expect from a group of that age; Doc Martens, power stances, and head tattoos. From scanning over the hall, it could be seen to contain a much younger audience than the previous gig at the Olympia Theatre in Dublin which the band was able to capitalize upon. Where the crowd was not perhaps so taken in Dublin they were met with enthusiasm by the youthful generation, but with some of the older looking on with a certain degree of scepticism.

The band blasted through such songs such as White Flags and Bury My Dead which were performed passionately. Perhaps the greatest part of the set is when the stage lights were brought down on order of the singer and everyone scuttled to take out their phones and lighters igniting the venue up for the penultimate song World On Fire; the bands favourite. The final song on the roster for the night was The Great Escape but they were not ready to escape before first reminding the crowd that everyone there was part of the same family asking that the crowd to extend their arms over the person beside them to link the audience in a chain of comradery. This brought to the end the bands performance and although it was not quite to my taste, the crowd definitely seemed become by the Londoners.

After a short interlude, which I imagine felt like an eternity for some, it was yet again time for Alter Bridge to take the Belfast stage. The dark veil was pierced by a chorus of chants and whilsts throughout the hall which was being barraged with blinks of light in time with the heavy bass which was perhaps nullified a tad due to the similar opening of the previous band. In the moments of lightness, the eagle-eyed viewer may have caught a glimpse of Bassist Brian Marshall and guitarist Mark Tremonti waiting to make their entrance which could account for some of the ecstatic screams. After teasing the crowd accordingly, the quartet emerged onto the floor to kick off what would be an unforgettable show. Screaming to life, the titans opened the night with the heavy riff of one of the more immediately recognizable songs from fortress album Addicted To Pain; a common staple for the band’s live performances. It was an excellent choice as it was the perfect opportunity for the crowd to warm up their voices and bodies for the show ahead.

Next up was one of my personal favourites off of the ABIII record, Ghosts Of Days Gone By. Described as guitarist Mark Tremonti as a track that starts out like a feel-good summer song but then takes you straight to hell, it was a great follow up and shows off the two sides of the Alter Bridge styling coin. It was a song that brought upon a flurry of clapping, a symphony of chanting and a flailing of headbanging throughout the whole hall and only helped further loosen up an already enthralled crowd.

After two classics Come To Life and Brand New Start which I’m sure a lot of the longterm AB fans were blown away by, it was time for the hard-hitting Cry Of Achilles. It was during this song that the sheer spectacle and magnitude of the night sunk in for me. All you could hear over the fast, unforgiving guitar riffs and expertly nailed vocals was a cascade of lyrics being thrown from all corners of the Ulster Hall, penetrating thrown the colossal speakers until these ‘cries’ from the audience made up 50% of what you could hear. This really helped bring grandeur to an already legendary track. This was a feat repeated throughout the night by the crowd that was not letting up and had no aversions to making their voices heard by the band.

Being presented onto the mic by Myles, it was now Mark’s turn to take point on vocals as he a unleashed the song I was longing to hear again since their last performance, Waters rising. The rock icon ensured to bring justice to my favorite song off of Fortress underlying his ability to completely command a stage and leave every single listener in awe. It is a strong reminder of the unrivaled talent of the former Creed guitarist and an insightful peek into what we can expect from him in 2018 when hopefully a new Tremonti album will burst onto the scene. His rough, untamed style is a welcome contrast to Myles meticulously mastered vocals, bringing with him a vibe of his metal influences displayed in his solo band. It is something I look onto eagerly with ever so wishful thinking for a return to the Belfast gigging scene once their new album hits the stores.

After a strong finish, it was time for Myles to reenter the limelight and to take it down a notch for a more mellow and personal performance. The singer with acoustic in hand took a seat down on the stool that the stage crew finally scared up after requesting one jokingly during the sound check previously that day. As the singer strummed us into Wonderful Life it was an emotional reminder to the crowd that the discography of Alter Bridge means so much more to a lot of fans that just everyday music. After the conclusion of wonderful life, he transitioned effortlessly into a melody of Watch Over You which entailed the singer swaying from side to side on top of his throne, stomping this foot in beat, acting as a human metronome. This was met with a huge reception of cheers from the dazzled audience and an almost wolf-like howl from Mark giving his props to his bandmate, showing the true friendship and respect the band has for each other.

This relaxed manner didn’t last long as the band immediately launched into the third and final track played from The Last Hero that night, Show Me A Leader. Being one of the initial tracks released to the public from the album it was clear that this was a crowd pleaser and raised the energy back after the slower segment. In times such as these, it was no surprise to hear the deeply politically driven lyrics belted out as loud as they were.

The ‘last’ song of the night was the testosterone fulled, grunge fest that is Metalingus. Being one of the first songs of the band I listened to after being suggested it many years ago, it is one that brought with great nostalgia and holds certain significance to myself. It was only natural that during the fast and crashing drums from Scott that the inner metalhead was released from everyone there causing everyone to lose all control their necks and hair as they thrashed their heads in approval. During the break, the powerful singer beckoned the crowd to shout back his chants to the stage which were returned by everyone. At this point, he was in absolute control of the crowd as if it was his puppet so when the figure crouched to his knees lowering his hands the hall followed lowering the whole of the Ulster Hall to their knees. This short pause of calmness in the crowd did not last long as all hell broke loose as many a determined Alter Bridge fans sprung to their feet bouncing to shake the auditorium to destruction once the mighty singer gave the order. It was with a spectalur spectrum of chords and percussion that the song ended to an eruption of appreciation for the crowd. The band made their exit but we did not have to wait long for the band’s return.

After a short lull, shouts of “Alter Bridge! Alter Bridge!” quickly coaxed the band back on the floor for their encore. The band made a solid finish on Isolation and Rise Today which allowed every fan there to expel any bit of vigor they still possessed. The highlight of this being Brain pointing his bass to the seated crowd above channeling his inner Lemmy Kilmister. This brought to an end what was a remarkable and exhausting night but not without a volley of picks, guitar sticks and paper airplane shaped setlists being cast into the crowd which I yet again was unable to obtain despite my best efforts. The band took their bows and thanked the audience for their support before posing for some pictures with the crowd.

When the lights came back on, in the wake of it all lay a cluster of beer bottles scattered across the floor and a collection of many satisfied faces who had just experienced their own piece of Alter Bridge history. ‘My Champion’ of the night goes to the girl to my left whose body movements could only be described as an exorcismic pendulum as she swung frantically to each song. As The Last Hero Tour meets its conclusion on the American leg later this year and the band simmer down for a well deserved rest you may find yourself in a void of Alter Bridge-less emptiness. However, don’t fear, all hope is not lost. If you haven’t already I would highly recommend grabbing a Tremonti album off the shelf and filling your metal boots with his truly unique sound especially in preparation for their new release; there is no way, in heaven or hell, you will have a regret. I am sure everyone else there won’t be able to live down all that they witnessed that night but my only hope is that well-deserved rest doesn’t last too long.

View our gallery by Sammie Quinn by clicking the photo below: 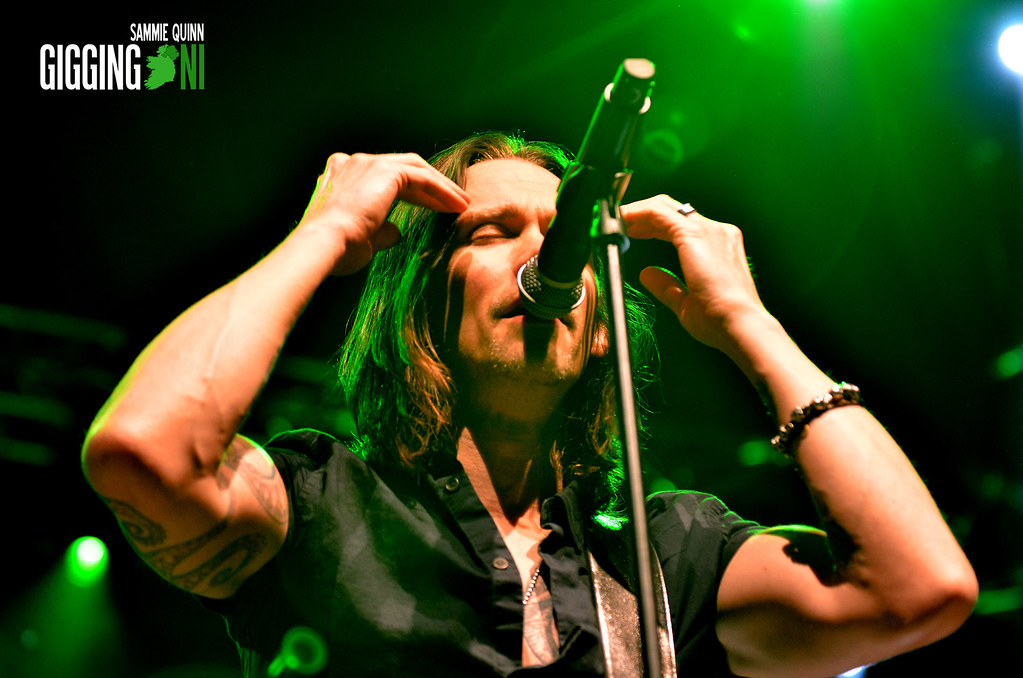