Neck Deep are a band currently at the very top of their game. Hot on the heels of their third studio album – The Peace and the Panic – which scored them fourth place in the UK album chart, they are experiencing a new wave of success that they’ve never tasted before, and it was fully apparent as they took to the stage of Mandela Hall on Wednesday night.

As It Is – Neck Deep – Mandela Hall, Belfast

This, in many ways, was a night of firsts. It was Wrexham’s pop-punk finest first gig in the city, and the opening night of the tour, giving them ample opportunity to test out tracks from the new album for the very first time.

The make-up of the gig itself was a huge success, with not one, not two, but three support bands – Woes, Real Friends and As It Is – hitting the stage before they provided the main event of the evening shortly after 9pm.

From the off it was clear that the crowd, which packed out the venue, offering little more than sardine space throughout – all the way to the doors at the back – were hugely excited to see the band, and had done no shortage of research when it came to the new record, and all of the new words that needed learning.

Throwing themselves into the gig, in what was an all-singing, all-jumping, guitar-shredding, crowd-surfing inspiring performance, the five-piece launched into Happy Judgement Day from the new record, happy to give lesser-performed material a chance from the off. It’s safe to say that, from the crowd’s reaction, any worries about how the new stuff would be received were quickly put to bed.

The band’s three proper studio albums were all represented, including the first song they ever recorded as a band. Cue a massive singalong, and people making their way out of the crowd for a momentary rest bite and a drink of water having tossed their bodies all over the place to their favourite song. Some members of the audience were making their way for water not unlike something from The Walking Dead – and however that may sound, it’s meant as a compliment.

Parachute was another song to ignite a singalong. With the stage bathed in blue light (the lighting for the whole evening was, what the youth of today refer to as “on point”), singer Ben Barlow made a point of telling the crowd how happy he was with the reaction the band have had to the new album, and seemed genuinely delighted that was the case.

Mosh pits came and mosh pits went as the night progressed, and the microphone was regularly swung out into the crowd for karaoke en masse, and no-one in the room let the band down when it was their turn to scream the words back to their Welsh heroes. The energy clearly visible on stage, with all guitarist jumping in unison and switching their position, as well as standing on the monitors while Barlow attacked his mic, was transferred into the almost rabid crowd who were taking in every minute with their heroes.

At one stage, crew member Razor – “an absolute lad” – joined in proceedings, adding an almost screamo element to the ensemble – and he’d be back at the end to bask in the triumphant conclusion to the evening.

With the evening reaching a crescendo, Barlow announced that the band would be playing “our collective favourite off the record – In Bloom” and the room went wild for the already familiar sound of what has all of the hallmarks of a hit single. It sparked another mass singalong, and was without doubt one of the highlights of a set filled with many memorable moments.

As is the way with many bands now, there was a short acoustic section, with Barlow encouraging the crowd to get involved with Head to the Ground, before being joined on stage for Wish You Were Here, a tribute to the fathers of two of the band members who sadly passed away since the previous album. It provided quite an emotional moment, and set the band up for their big finish.

With the rest of the musicians back on stage, a rendition of what the band called “our biggest song” – A Part of Me – featured inevitable backing vocals from each and every person there, before the band left the stage for all of eight seconds, before reappearing to finish the show in style.

And finish it in style they most certainly did. The whole room was a bouncing, sweaty mess at Barnes’ command: “I need everyone in the hall when this song drops to jump up and fucking down” he cried, before his familiar lyrics “I’ve been wasting away” from Life’s Not Out to Get You‘s Can’t Kick Up the Roots sent the place into rapture. Barnes leapt into the crowd to enjoy it amongst adoring fans, and it would have provided the perfect end to the show, if there hadn’t been time for Where Do We Go When We Go from the new album, with its familiar chorus of “pain pain go away, come back another day” prompting the biggest singalong of the evening, and that’s some accolade.

It’s almost impossible to knock a band who attack each song with such enthusiasm, and the crowd certainly proved that they enjoyed watching the Wrexham pop-punkers do what they do best. Barnes promised near the end that the band would be back to Belfast soon, and on this showing, there’s no doubting that they are likely capable of filling an even bigger venue the next time they arrive on our shores.

PS. Any band that finishes their set, then stays on stage to rave to 2Unlimited are winning at being a band in my eyes.

Click on the image below to view our full gallery of photographs by Matthew Johnston: 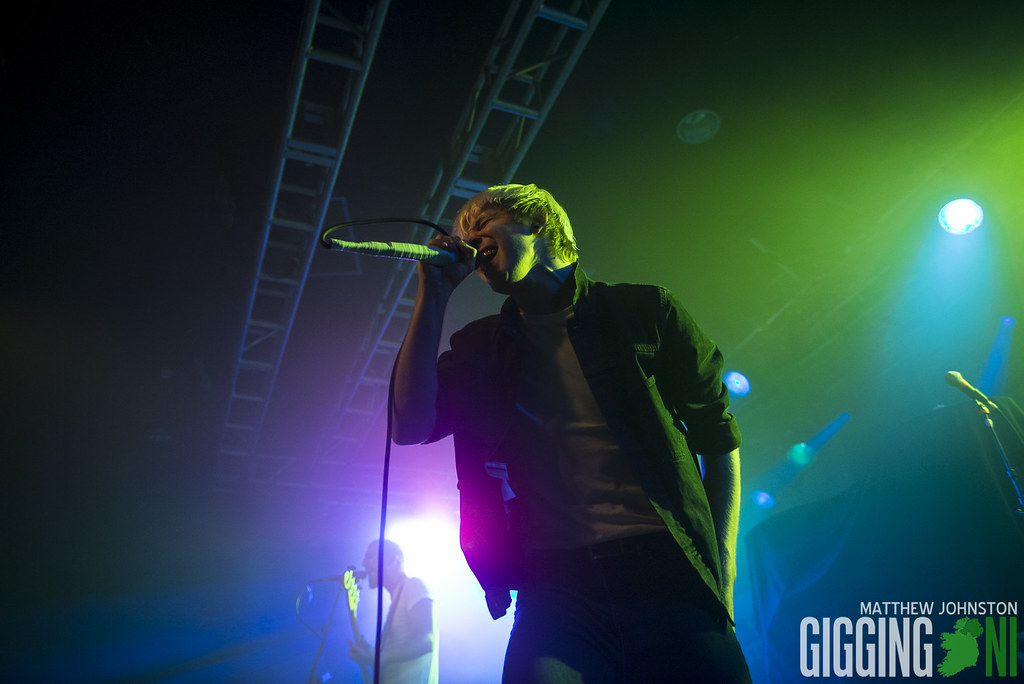