Returning to Belfast for the first time in five years, American pop rockers Train finished up their Play That Song Tour at the Waterfront Hall last night. Having penned some of the most recognisable songs from the last decade or so, they played to a nearly full house of fans eagerly awaiting their come back.

Before the San Francisco five-piece take to the stage to wrap up their headline tour, tonight’s support comes in the form of Hannah Grace, an up and coming talent making waves in the UK music scene with her incredible vocal prowess. You might be familiar with Hannah’s work as her enchanting cover of Fatboy Slim’s ‘Praise You’ soundtracks the most recent Lloyd’s Bank TV ad campaign. She emerges in the dim light of the stage without introduction, accompanied only by her guitarist. Immediately her soaring notes and mesmerising whistle tones fill the auditorium in a style reminiscent of London Grammar’s Hannah Reid. Testament to her amazing vocal range is the fact that she is aided only by gently strummed electric guitar and a tambourine which she taps nonchalantly against her thigh, inciting the crowd to clap along. The rockier edge of ‘Just a Boy’ and ‘Blue With You’, married with the quivering falsetto of ‘Oh River’, will surely have won over some new fans tonight.

Clad all in black, rushing train sounds announce the arrival of the headliners to a sea of camera phones. “Belfast, finally!” yells frontman Patrick Monahan, launching seamlessly into ‘Drink Up’ and a Latin-infused ’50 Ways to Say Goodbye’. ‘Get to Me’ is chanted back at the band (“better than Dublin”, naturally). Having asked fans on Twitter what songs they wanted to hear performed on the tour, Monahan sings and plays harmonica on ‘I Am’, the first song he ever wrote, which has a folky feel. In contrast, ‘Silver Dollar’ – from Train’s latest album – is the last song he wrote; it features a bouncy keyboard hook and is distinctly more modern. The positioning of both tracks following one another in the setlist really illustrates the evolution of the band’s sound and their enduring appeal, as both are received equally well.

Tonight’s setlist features a number of cover versions, including ‘Free Fallin’’ in tribute to the late American legend Tom Petty, as well as Queen & David Bowie’s ‘Under Pressure’ during the encore. In a nod to current chart music, Train mash up snippets of current hits from the likes of Ed Sheeran, Sia and Shawn Mendes into their rendition of ‘Mermaid’. The band’s live show is fun and energetic, incorporating lots of crowd interaction, be it throwing plectrums, drum sticks and even signed T-shirts into the audience or climbing down to the front row to take selfies and share the microphone with fans during Ashleigh Monroe duet ‘Bruises’.

Train are not used to playing such small venues in the US, so Monahan takes the opportunity to perform an acapella version of solo track ‘Always Midnight’, without any amplification and only his band to harmonise for the final refrain. His powerfully raw vocals command silence throughout the venue and he seems genuinely humbled by the extended applause he receives. Train have mastered the art of writing the radio-friendly hit that is also somewhat heartfelt, and shamelessly feel-good tracks like ‘Drive By’ and ‘Lost and Found’ are proof of this.

The crowd’s singing carries the weight of mega hit ‘Hey Soul Sister’, and an uplifting chorus of “na na na” brings the mighty and hotly anticipated ‘Drops of Jupiter’ to a climax, easily one of the most iconic songs of the noughties. Ending their world tour on a high, Train have proved themselves to be deserving of a place among the great all-American stadium bands.

View the full gallery by Tremaine Gregg by clicking on the photo below: 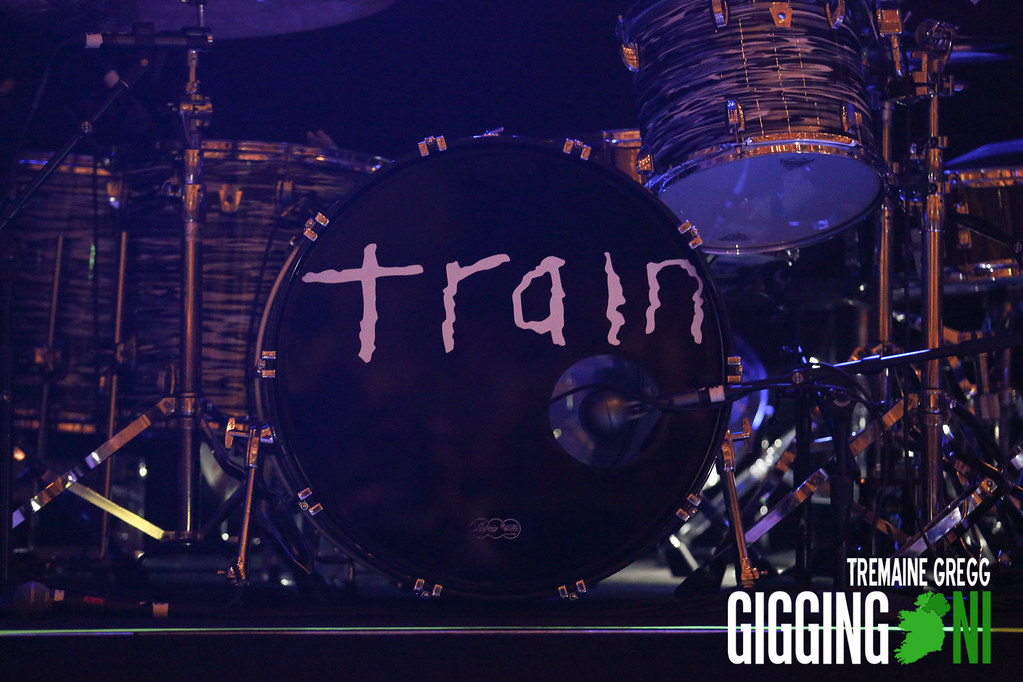