Swedish songstress Zara Larsson graced the stage at Belfast’s Waterfront Hall last night, leaving storm Ophelia in her wake. Opening with ‘Never Forget You‘ and ‘Sundown,’ it was clear that the audience were in for quite a show. Not only did the tiny singer showcase her epic vocals, but joined by backup dancers, she was an incredible performer. And the abs! They could make the girls, and some of the boys, jealous.

She addressed the crowd: “I’m so happy to be here. I’ve never been here before and so excited that I get to play in this beautiful venue.

“This song is about not listening to negativity. No one will look at you strange if you’re dancing. We’re not judgmental people, right?”

This advice was strongly relished by some members of the audience, who were giving Zara a run for her money in terms of twerking, dropping and sexy dancing.

“No matter what people tell you,” she continued, “don’t listen to them… Unless its me telling you that you’re all beautiful. This is ‘What They Say.’”

The inspirational song had the crowd singing along with lyrics like: “Whatever you do just don’t believe what they say.”

It’s hard to believe that she is still so young, yet with so much talent and a career nearly as sparkly as her top. At only 10-years-old, she won a talent show ‘Talang‘ which cemented her as a household name in her home country. Her debut EP, ‘Introducing,’ was released in 2013, and spawned the single ‘Uncover‘ which topped the charts in Scandinavian countries Sweden, Denmark and Norway.

Her debut studio album, aptly named ‘1,’ was released a year later and also hit the #1 spot in Sweden.

“Where are all my ladies at? Where are all my fellas at?” she shouted into the crowd before breaking into ‘Girls Like,’ a feature with British rapper Tinie Tempah, surprising us all with rapping his verses. Is there anything the girl can’t do? Surely not, as half way through the song she mashes up with another feature, David Guetta track ‘This One’s For You.’

Despite how gorgeous she is, she shows her vulnerability in the next track, ‘Don’t Let Me Be Yours,’ a song she admitted was written with someone we all know well.

“This next song is one of my favourites off the album,” she said. “I wrote it with someone very special, Ed Sheeran.”

The song is about not wanting to be someone’s mistake, as she sings: “You’re bad for my health, but I don’t care I want you anyway,” before doing a medley of ‘Shape Of You.’

Sexy ‘TG4M (Too Good For Me)‘ was next, before emotional break up song ‘I Can’t Fall In Love Without You.’ The latter was performed on a stool, as Zara belted out the lyrics, proving that she’s a contemporary artist who doesn’t have to rely on club bangers to get through her career.

Crowd favourites included singles ‘I Would Like,’ ‘Not My Fault‘ and ‘So Good,’ as everyone danced and sang along.

Despite being a successful artist, you could tell she was still down to earth and humble as she thanked the crowd for their applause after every song.

“I can’t believe this is my first UK tour,” she said as she bowed out. “It’s a great response. Thank you so much for coming and supporting me and letting me do this. The UK is so special to me. I want to sing a very special song that I did with Clean Bandit. Belfast, will you be a part of my symphony tonight?” She then performed her first UK number one, ‘Symphony‘ to a crazy reaction before leaving the stage, but not for long, as her encore ‘Lush Life‘ was met with screams as soon as the first few notes were played.

View our full gallery by Tremaine Gregg by clicking the photo below: 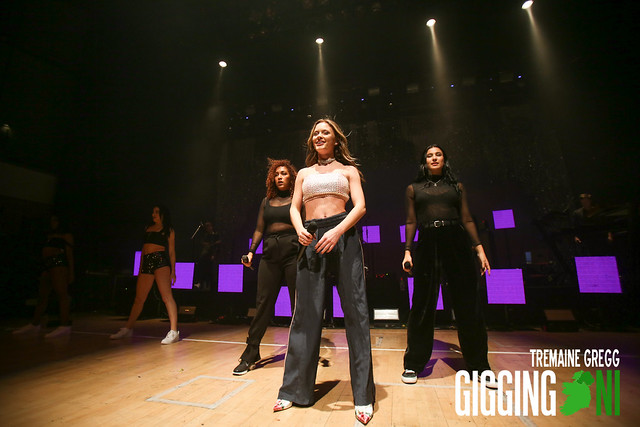 Tags:
belfast, I Can't Fall In Love Without You, Lush Life, So Good, TG4M, Too Good For Me, waterfront hall, Zara Larsson
Share: