Royal Blood erupted onto the music scene in 2014 with their self-titled album and have dominated the rock genre ever since.  They have only two albums under their belt yet it is impossible that you have not heard of at least one of their songs.  Mike Kerr and Ben Thatcher, originally from Brighton, brought their immense set to Dublin and proved to us why Jimmy Page himself described them as “fantastic”, “riveting” and “taking rock into a new realm.”

The duo started their set with dimmed lights before they went straight into the iconic “Lights Out” (ironic, I know). They went all out for their first track of the night and ensured everyone was geared up from the get go.  The stage included red lasers, a huge video of the guys playing and big white lights which set the excitement for the rest of the night ahead.

After a quick guitar change, Mike Kerr got the crowd clapping along as the recognisable drumming and guitaring of “Where Are You Now” kicked in.  Throughout the song I was a disbelief that there were only two people on stage.  Ben Thatcher was completely effortless on drums and Mike Kerr was making noise on his bass guitar that would have added up to three people in any other band.  Throughout this track we saw a bit more movement from Mike; when he wasn’t singing he was strutting up the stage walkway which naturally drove the crowds wild the closer he got to them.

Royal Blood demonstrated an incredible ease and suaveness with a real rock and roll attitude when they played.  However, once the music stopped they made very clear how much they appreciated the reception they had received.  Mike went on to say “I can’t believe this is happening to us tonight.  It’s crazy, thank you so much for coming.  Now I hope everyone has the best f****** time tonight”.  This continued throughout the gig as we heard funny anecdotes about their last time in Dublin.  They also showed a lot of humbleness by stating “we feel very uncomfortable right now.  Worst front man of all time.  I’m a man and I’m at the front and that’s it.”  Not only do I want that front man quote on a t-shirt, but it did well in humanising the band.  Their humility and appreciation for playing the 3Arena made the gig all the more enjoyable as it was apparent they were having as much fun as we were.

As the night went on the setlist just got better and more exciting.  At one point we were introduced to two more people on stage, two backing vocalists.  As they came on stage they all got together and downed what I really hope was a shot of some kind before the singers took their spot on a podium at the back.  After this the band started playing “I Only Lie When I Love You”.  Having a few more people on stage really changed the dynamic and I loved that when the girls weren’t singing they were posing with little movement.  It made the set up very professional and was reminiscent rock mixed with vogueing.

As Royal Blood only have the two albums released, the set was very concise and easy to follow.  We heard gems such as “Little Monster”, “Hook, Line & Sinker”, “Blood Hands”, and “Hole in Your Heart”.  Throughout the show we had the brilliant juxtaposition of dramatic lighting, fire sticks hitting gongs and ‘laser rain’ as I call it accompanying an incredibly loud and exciting performance from the band.  There was not moment in which the guys did not have the entire audience captivated.  For a duo to have an arena of fans crowd surfing, moshing and throwing everything under the sun around (including shoes and a jacket…) is unbelievable.

At the end of their set I thought to myself “this gig is definitely the best one I’ve been to this year.”  The encore changed this to “this is 100% in my top three gigs ever”.  After a very brief time offstage the guys came back to an eruption of cheers.  Mike started off with a very slow build up on his bass which was very Pink Floyd-esque.  Next thing they were playing one of their most famous tracks “Ten Tonne Skeleton”.  Naturally the mosh pits started as soon as the intro as everyone was going crazy.

After everyone was well and truly covered in sweat, beer and who knows what else Mike sauntered his way down to the end of the stage walkway.  What was going to happen?  As Ben was at the back drumming, Mike proceeded to split the audience in half with just a movement of his arm.  Everyone quickly obeyed and left a gap in the crowd.  Anticipation was rife in the arena.  Next thing we knew he was getting each side to cheer at different times and at different levels of noise.  One man literally commanded the entirety of the 3Arena with nothing but arm movements.

This geared everyone up nicely for their final track of the night – what else would it be but their debut single “Out of the Black”.  For many this was the song they were waiting to hear and it ended the gig on a crazy high.  They put all of their energy into this final demonstration of why legends such as Jimmy Page are fans of them.

Never have I seen two people make so much noise on set.  Their set was flawless as they channelled a new genre of rock which did not need a stage full of people or any gimmicks.  They came on, they played remarkably and they 100% left their stamp on Dublin. 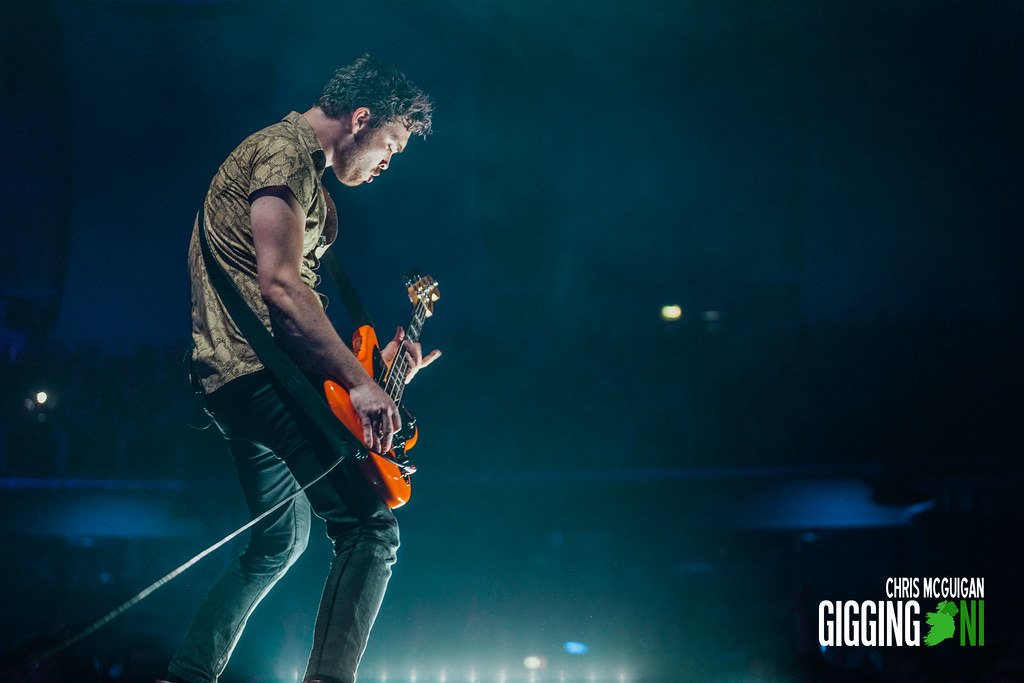