As collaborations go, the trio of James Yorkston (Scottish folk singer-songwriter), Jon Thorne (jazz bassist) and Suhail Yusuf Khan (classical Indian singer and sarangi player) must be one of the most diverse and unusual outfits currently touring and recording. The trio have only been playing together since 2014 but their most recent album “Neuk Wight Delhi All-Stars” wowed the critics and received glowing reviews from The Guardian, Mojo, Rolling Stone and others, with Uncut magazine suggesting that it might be one of the top albums of 2017.

Their sound is both unique and accessible. Prior to this evening’s concert I heard Radio Ulster’s Ralph McClean describe their sound as “unclassifiable” and that has to be pretty accurate. Khan’s vocals swoop and soar above the guitar and bass, with the sarangi adding that magical extra element. Way back (probably the early 1980’s) when I started to listen to world music, I remember hearing voices like Nusrat Fateh Ali Khan singing Sufi devotional music, and Khan’s voice has the same effect on me tonight.

Yorkston’s guitar playing is sublime and he also takes vocal duties when needed. Initially discovered by John Peel, there could be no greater compliment paid to Yorkston than that by the late, great, John Martyn. The story goes that Yorkston contacted Martyn to ask him for a support slot for one show in Edinburgh; Martyn’s response was to offer him the support slots for all 27 dates on his UK and Ireland tour.

Jon Thorne’s bass encompasses just about every style that you could possibly conceive, playing with a deftness and touch than reminds me of his mentor, the great Danny Thompson, who coincidentally played bass for John Martyn for many years.

There’s no support act this evening at the Black Box and the band take the stage and open with a lengthy instrumental which sets the tone for the rest of the evening. Khan bows the sarangi, sliding in and out of notes; Thorn’s bass booms and Yorkston plays a staccato-style guitar.

When Yorkston takes the vocals the sound produced would not be out of place on an album like Jon Hopkins/King Creosote’s Diamond Mine. The combination of Yorkston and Khan singing together compliment each other in a very unexpected way and this is what brings many of the songs to life. When Khan takes the lead vocals on “The Wedding Song”, the crowd seem captivated by the quiet grace of what they are experiencing.

Other tracks are more upbeat, and “Knochentanz” almost sounds like a slowed-down version of Zeppelins’ “Whole Lotta Love” with Khan’s sarangi taking the place of Robert Plant’s voice. Jon Thorne gets a few chances to sing as well, introducing himself by asking the crowd if they remembered when the Beatles let Ringo sing. Thorne gives a great rendition of “Everything Sacred” from the band’s first album, with Yorkston accompanying him on a traditional Swedish nyckelharpa.

This is followed by a cover of Ivor Cutler’s “Little Black Buzzer” which needs to be restarted after the band dissolve into fits of laughter because of the speed of Thorne’s bass playing.

The band also cover the Dick Gaughan tune “Westlin’ Winds” with an old Indian poem replacing the usual Robert Burns lyrics. This is a beautiful and multi-layered song with the juxtaposition of Khan’s vocals with Scottish folk providing what could be the band’s signature track.

Yorkston leads the haunting and melancholy “Broken Wave” which was written to commemorate an old friend and ex-bandmate and the down-beat theme continues with Thorne singing about sadness and being homesick. From here, Khan delivers an old Sufi poem and name-checks Nusrat Fateh Ali Khan in his introduction. The vocal gymnastics on this wonderfully evocative song need to be heard to be believed; it sounds like there are three voices on stage when it is just Khan, building to a crescendo of noise, and then, suddenly it’s over. We get Thorne singing “One More Day” as an encore, a song that sounds firmly rooted in the English folk tradition and ends the evening with a pleasant and contemplative feel.

Impossible to pigeon-hole, impossible to categorise, but compelling and compulsive listening. Kudos to all at Moving On Music for bringing this band back to Belfast. 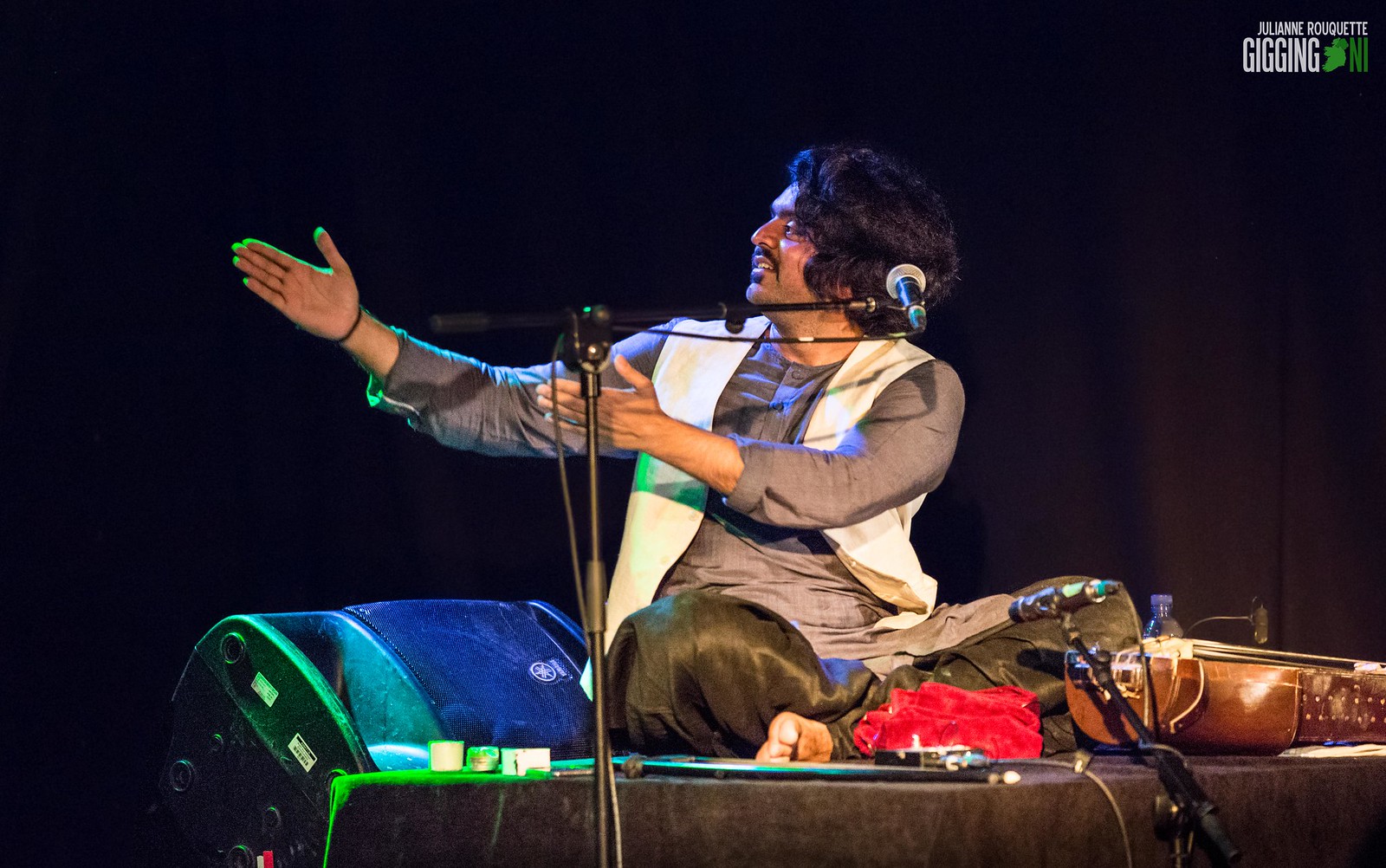