Last night saw the legendary Frank Carter & the Rattlesnakes play their rescheduled gig at Belfast’s Mandela Hall.  Over the past few years the punk rock band have been taking the UK and Ireland by storm as they seem to be gaining more and more of a following.  Last night’s set certainly showed us all why they are a force to be reckoned with.

Their mixture of sheer energy, funny & personal anecdotes and their determination to make gigs a safe place for women not only provided a night of amazing entertainment but ensured they had a very strong message for everyone there.  It turns out there are three things guaranteed from a Frank Carter & The Rattlesnakes gig – sore legs from jumping around, brilliant music and great craic with the band.

The night started with an ominous change in lighting and dramatic musical tones.  This inevitably got the crowd all riled up for the bands entrance.  Each band member walked on stage independently and was met with huge cheers.  Nothing, however, compared to when Frank Carter himself sauntered on the stage and the screams of the crowd welcomed his presence.  His incredible confidence allowed him to own the entire room from the get-go and did not waiver the whole night.

From the beginning the guys gave this performance a passion that is unrivalled.  It is unusual for a band to bring out the big guns so early in a performance, however when performing “Juggernaut” Frank proceeded to get into the pit and crowd surf before performing a handstand whilst having his mic passed to him to continue singing.  This type of interaction with everyone continued throughout the night and you never knew what was going to come next.

At one-point Frank was in amongst the crowd singing whilst everyone was fighting for a rivalled spot beside the singer.  This interaction was not limited to Frank, however, as the lead guitarist Dean Richardson commenced his crowd surfing debut whilst playing his guitar and thrashing around whilst doing so.

The setlist was undoubtedly flawless with the perfect mixture of tracks from Modern Ruin and Blossom including “Modern Ruin”, “Lullaby” (dedicated to his three year old daughter and new parents), and “Fangs”.  Not only was the band enjoying every minute of the night, but so was the crowd.  People were going crazy jumping around, creating mosh pits, singing their hearts out (or sometimes screaming) and crowd surfing.  Whilst everyone was roasting, soaked in sweat and more than likely had a few bruises here and there, the energy did not waiver the entire night.

One moment within the gig that really resonated with me as a woman was during the track “Wild Flowers”.  Before the guys started, Frank explained that he wants his gigs to be a safe place for women and that during this song it would be a women-only crowd surf.  He also went one step further by explaining that if anyone acted inappropriately he would personally come down to them. Then the madness ensued as women were racing to the right of the crowd and getting chucked up into the air.  Whilst this was an incredible adrenaline rush, it was so refreshing to have a message like this put across from such a well thought of band.  At one point later, he actually put a stop to crowd surfing as girls at the front of the stage were getting crushed.

The anecdotes and sheer respect Frank has for his fans made this more than just a night with great music – it was a time for us and the band to get to know each other better.  He even got to know someone who wasn’t even there as he took a mobile from a fan and rang their mum explaining that he was playing the gig her son as at.  It was banter like this that made the night incredibly memorable and was definitely worth the wait.

The night closed with Blossom’s“I Hate You”.  The crowd was naturally shouting along and no doubt resonating their own experience with the lyrics as everyone was screaming from the heart.  We could have sat and watched hours more of the guys playing but as the band left the stage the moment kicked in where we realised this was the end of an astonishing set.

Despite the gig being postponed from November the guys did not disappoint and are ones you could watch again and again.

Click on our photo gallery, by Bernie McAllister, below: 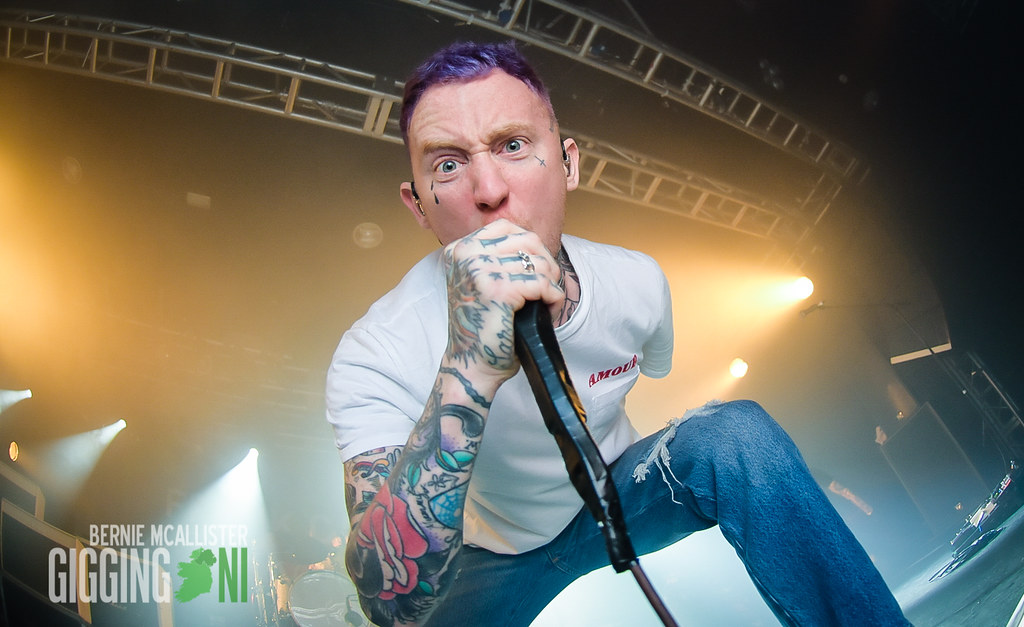