Chairs are laid out in neat rows for today’s afternoon show and it’s two years to the week when Hazel O’Connor last played Belfast’s Black Box, also as part of Out To Lunch Festival. That time wasn’t with Cormac de Barra but with her bandmates Clare Hirst (saxophonist with Bowie and The Communards) and Sarah Fisher (keyboardist with Eurythmics). She’s been gigging in these two guises for a number of years and right now sees her beginning two separate UK tours as well as being on crutches for what she describes in interviews as a foot “reshaping”, an operation she has apparently been needing since birth.

Today we’re here with harpist de Barra who is probably most famous for working with Moya Brennan in her own band and joining Brennan’s Grammy Award-winning Celtic-inspired family band Clannad for their 2007 reunion. O’Connor tells us she met de Barra in 1993 in “a theatre below an art gallery” doing a Yeats play and they’ve been playing together sporadically since. She tells us a lot of things, in fact. This isn’t going to be one of those minimal interaction shows. From the moment she throws her crutches off after the first song and exclaims “Like Lazarus!” (less excitingly, because they restrict her from using her hands to gesture) we know we’re in for something interesting.

Each song has a story and we’re treated to those tales. “Who Will Care?” inspired by the 16 year old O’Connor finding a friend who’d taken an overdose and calling the ambulance, “Runaway” about her being a runaway, leaving hometown Coventry at 16 for Amsterdam. “One More Try” a George Michael cover illustrated by a story of their friendship in the early 80s because they lived near each other and, O’Connor alluding to their difficulties with their respective record companies: “We had the same lawyers”. Friends and family who are no longer with us are a theme and it’s clear to see why the 2017 album is called See You Again, the title coming from the song “Rebecca, When Will I See You Again?”, another tribute to a deceased friend. The by-product of dealing with such raw emotion is, at times awkwardness in lyrics and slightly predictable greeting card lines the result of trying to put grief as plainly as possibly into rhyming couplets. The harp elevates songs like these, songs where a concentrated effort to just study the lyrics would leave the pieces wanting. On other occasions the harp shows up gaps, audience favourite “Decadent Days” comes out thinly without the punk shouts and synth layers that usually shelter it.

Some songs of course, come together beautifully with the harp and naturally, these tend to be the ones written specifically for it. “Could Be With Me” is one, the backing vocals suit rather than just being for the sake of it and O’Connor’s lyrics are at their best when questioning the possibilities and absences of romantic relationships with a wistful tone. O’Connor’s voice has always had a crack running down the middle of it and this has increased with age and requires careful strategising. It suits a speak-shout monotone or a plaintive whisper rather than straight-up singing and this is the difficulty, as many of the songs require singing and she has a liking for the American soul sound, especially when finishing a song with a flourish. But the harp saves the day again, as the more Irish-inspired songs bring with them a fierceness in her voice, an embrace of the gruff Irishness of drinking songs.

“I’ll See You Again” – there’s that phrase again – is one such traditional Irish song, the lyrics fitted around a piece of music written by blind harpist Turlough O’Carolan who lived in the late 17th and early 18th centuries and the harp fully comes to life, the progressions a kind of baroque trad. “Farewell To Music” written by O’Carolan two weeks before he died lets de Barra come to the fore, creating chimes and rhythm which he weaves in and out of, playing the harp almost as piano, creating strong melody lines rather than the stereotype of the Oirish waterfall of pleasant-sounding notes that are musically meaningless. It’s also startlingly poppy on a cover of Bob Marley’s “Redemption Song”.

As the end of the show moves into sight, Roger the saxophonist is introduced and while the harp creates some foreboding sensations the sax makes “Big Brother” an altogether smoother experience even though we know Roger is only warming up for “Will You?”. When “Will You?” finally appears O’Connor is right, it’s really just a song about pulling but it cuts right through the superficial aspect and gets to the intense heart of hopefully wondering what will happen; the famed saxophone solo at the end the stuff the song could absolutely not do without, acoustic show or no.

“Eighth Day” begins unexpectedly and it’s a false start when an audience member loudly calls “Oh, here we go!” and everyone laughs. Taking time to start again gives O’Connor a chance to mention Trump (who she’s already referred to as the Antichrist) and the chilling allegory the song has become. The 62 year old’s voice understandably has to drop an octave for the “Amen”s that were shrieked in 1981 but it’s not a huge loss and what we gain in the 37 year gap is the knowledge that the far-off futuristic nightmares are beginning to come true. It’s the first standing ovation of the day, people assuming the show is over but O’Connor – not quite being able to disappear backstage and reappear in a hurry with crutches – stays on stage and announces the encore, teaching us snippets of choruses to join in. Then leaves, or rather takes her place to sell CDs and sign autographs at the merchandise table, for which there is a solid queue; showing that after two standing ovations, the audience are willing to stand for her a third time.

Scroll through our photo gallery by Bernie McAllister, below: 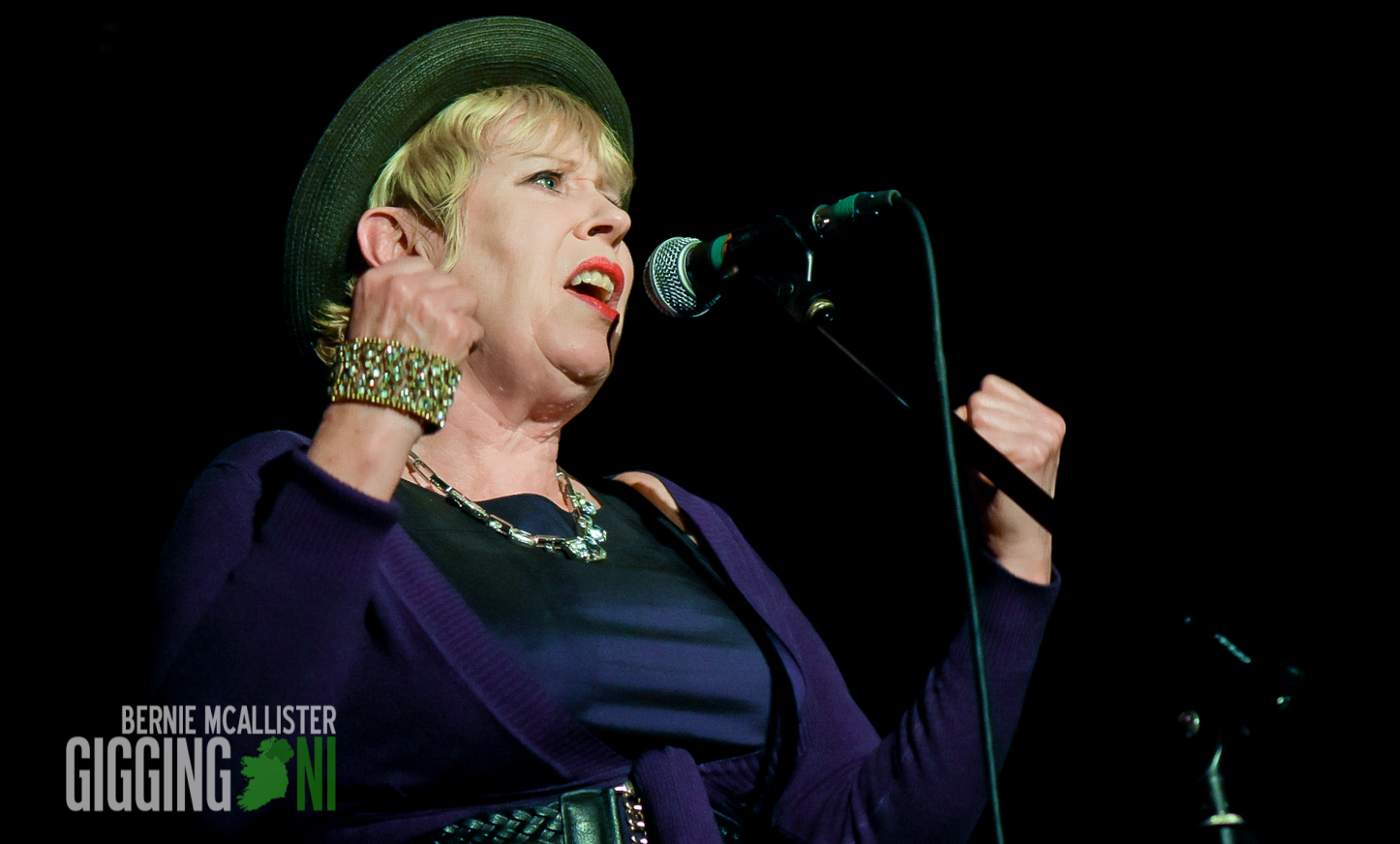