Welcome folks to the year 2018! A new year, a new us and a new one to be torn for all the gigs that will be coming our way this year. And what better way to kick start the new year than the hottest and funniest band on the planet; the mighty Steel Panther. Was their Northern Irish debut hot enough for them? Well, let’s just find out.

Kicking off the night’s proceedings were one of the UK’s fastest, rising new acts; Wayward Sons, who were also prepared for their Belfast debut. Now, under the Wayward Sons name the band are pretty new to these shores, however each of the members of this supergroup have been here before. From Chrome Molly bassist Nic Wastell to former Little Angel’s frontman Toby Jepson, who hasn’t done a Belfast show since the Little Angels farewell tour in the same venue a few years back. Though they were faced with a number of issues, from keyboardist Dave Kemp not being able to perform on the tour to a change in schedule due to when band’s can soundcheck in the residential area. This didn’t stop this band of legends from putting on a high octane, hard rock performance like no other as they performed tracks from their debut album, ‘Ghosts Of Yet To Come.’

Wayward Sons may have got a fantastic reception, it would have been a lot better if some of the younger crowd could have been there to see them. That being said, as the sold out Limelight 1 began to get packed to the rafters, it was time for the one and the only Steel Panther to hit the stage.

From the tight, patterned trousers that made my balls sore just by looking at them to the most fabulously styled haired ever, these guys were here to party. Deep down you could tell the band were a little nervous as they pop their Belfast cherry but everyone in attendance (especially the ladies) made them feel comfortable as they sang a long to the likes of ‘Supersonic Sex Machine’ and ‘Asian Hooker’ with the guys declaring us ‘better than Dublin’ so early in the set. Of course! There is one thing these flamboyant boys love to do and that is dicking around (in the bedroom and on stage), from the rather lewd hand gestures they suggested to the ladies at the front to the overdose of sex jokes, including guitarist Satchel talking about his Grandfather’s local car towing business ‘Camel Toeing.’

Never before have I heard this venue in such hysterics as these icons just had fun, especially when they kept rejecting the king of the pout himself, bassist Lexxi Foxx. But while their jokes may have stole the show, it was the band’s extraordinary talent that just had the audience in awe. From Satchel’s guitar and drum solo, to the high pitched wail from the skinny Vince Neil himself, Michael Starr.

Even drummer Stix Zadinia showed that he can do more than drum as he sat behind the keyboard for the ballad ‘That’s When You Came In’ which had everyone in attendance raise the roof. The mass of females stormed onto the stage during ’17 Girls In A Row’ and the epic ‘Death To All But Metal’ were just more highlight’s from Steel Panther’s rambunctious short set list (due to the amount of talking between songs.) Yet as the final chord of ‘Community Property’ rang out it was clear that the band made the right decision to finally come to Northern Ireland, especially to kick start their UK/Irish tour.

In all my years of going to the Limelight 1, I have never seen the venue as packed and as crazy in all of my life but it just goes to show the impression that a talented comedy act can leave on people’s lives. Steel Panther CAME, they saw and they pleasured the genitalia (and hearts) of the entire country of Ireland. Hopefully it won’t be too long until they are back again for sloppy seconds.

Visit the photo gallery by Marc Leach below: 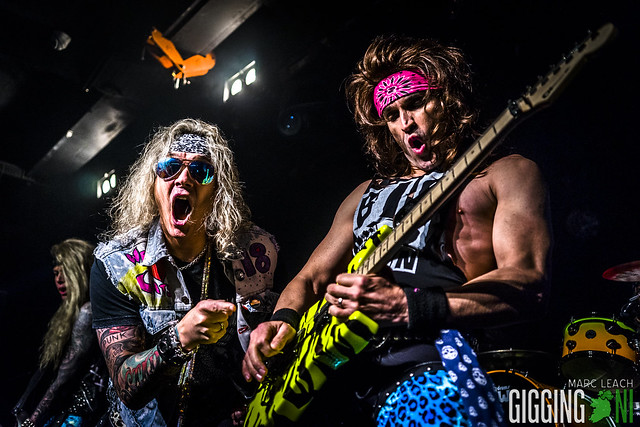