The annual Output Music Conference and Showcase returned to Belfast last Thursday, February 8th, and gave us a day filled with seminars and keynote speeches.

In the evening, the spotlight turned to the best of Northern Ireland’s home grown talent, with 37 performances taking place across venues in the Cathedral Quarter.

Shauneen, Maria and Emma, collectively known as Saffyre, kicked off the nights proceedings at the Duke of York. With beautiful melodies and harmonies, they delivered American country and catchy commercial pop songs to their small but appreciative audience.

Next up – Hand Models. Hand Models are a loud, tight, in your face, punchy, indie rock four piece from Belfast. Their songs ranged from stripped back slower tunes, to shouty pop rock choruses. Think Weezer meets The Pixies and it’ll give you a little idea as to how these guys sound.

A real surprise as the opening act in the Spaniard with Eve Belle who I had never seen perform before. A very distinct style and a wonderful voice. The crowd was small early in the evening, but she captured their attention and held them for the duration of her set.

Kid Trench was first up on The Dirty Onion stage, and I have to say one of my favourite bands of this years Output. Gerard Sands hails from Newry and, with his soaring falsetto vocals and accompaniment of sparse electronic beats, he delivered a set that was both hypnotic and captivating.

Callum Stewart is continuing to build a reputation for songwriting and solo performance. A set of well-crafted songs, delivered with heart and passion to an attentive audience.

Sam Wickens took to the Black Box main stage and, from start to finish, you could have heard the proverbial pin drop. Sam, who recently featured on Sky Arts’ Tony Visconti’s Unsigned Heroes, delivered a half hour set full of powerful songs, with expressive and poignant lyrics that had the audience completely immersed in his performance.

Downstairs in the Bullit lobby we were treated to a really well-received set from Rebekah Fitch as she swapped from keys to drum machine to flute, aided by some nifty loops. Rebekah’s voice was crystal clear; great sound in this venue all night.

Laid-back and slightly off-centre songs, delivered in an a style that echoed early Tom Waits, had the crowd in the upstairs bar at the Spaniard hanging on every note.

Rosborough managed to bring The Green Room, Black Box, to a standstill with his incredibly strong vocals and emotive lyrics.  Everyone was engrossed throughout the entire set and even brought a tear to the eye with his track “Burn Blue”.  He brought the Derry to Belfast and showed us all why he is a force to be reckoned with in the NI music scene.

Robocobra Quartet brought Babel (the roof terrace at Bullitt) to life, packing a sizeable crowd into a fairly small space. They belted out thumping, heavy, drum-driven jazz, that I’m pretty sure could be heard anywhere in Belfast City centre during their set.

Next up on the Black Box main stage was singer songwriter Aislinn Logan, who delivered an intriguing set with strong confident vocals, in contrast with her soft, ambient guitar. A Northern Ireland native based in London, Aislinn has a unique voice and sound. Definitely one to watch out for.

Another contender for band of the night. ROE looked dwarfed by her equipment but she belted out one catchy, punchy tune after another. She seemed to be enjoying herself, and the crowd hung on her every note.

Guitars and electro-pop/piano band DAY_S are about to head out with All Tvvins on their European tour. This is an interesting, and at times, soulful trio who would have had the audience in the Spaniard dancing, if there had been any room to bust a few moves.

Hunkpapa have become well known for their energetic and fun live performances.  Thursday night was no different and, from start to finish, the entire room was jumping, and singing, along.

Nice to have a bit of guitar-driven rock and roll, in this case served up by New Pagans. Cahir O’Doherty gave an incredibly spirited and energetic performance on guitar and Lyndsey McDougall’s powerful voice carried the set with ease.

The more I see Beauty Sleep, the more I suspect that (one day) they are going to morph into Talking Heads. Given that I firmly believe that Talking Heads were the greatest pop band ever, that’s a real compliment. Ryan McGroarty makes a fine and talented front-man, with Cheylene Murphy providing excellent support on synths and vocals and Aimee Williamson pounding out the bass.

I caught Silences at Moira Calling last year and was looking forward to seeing them again at Output this year. They didnt disappoint, and were a contender for my favourite band of the night. A three piece from Co Armagh, their sound ranged from delicate ballads to raucous alternative rock. The audience were on their feet and dancing from the get-go.

These guys are just the staple of alternative Irish rock so it was only natural they played the iconic Duke of York.  Their set was flawless, as usual, and intertwined the humour that we have come to love from them.  Their sing-a-long belters alongside banter and Guinness bribes to the crowd was the epitome of a great live show.

Winner of the 2017 NI Music Prize, Joshua Burnside took to the Bullitt lobby to end the night of live gigs before the after party.  The entire venue was packed and buzzing yet Joshua had a way of commanding the entire room and ensuring that all eyes were on his set.  His emotive and poetic lyrics accompanied with a talented band ensured the evening ended on an incredible high.

Photos by Julianne Rouquette, Michael Barbour and Chris McGuigan. To view our full Flickr gallery, click on the image below. 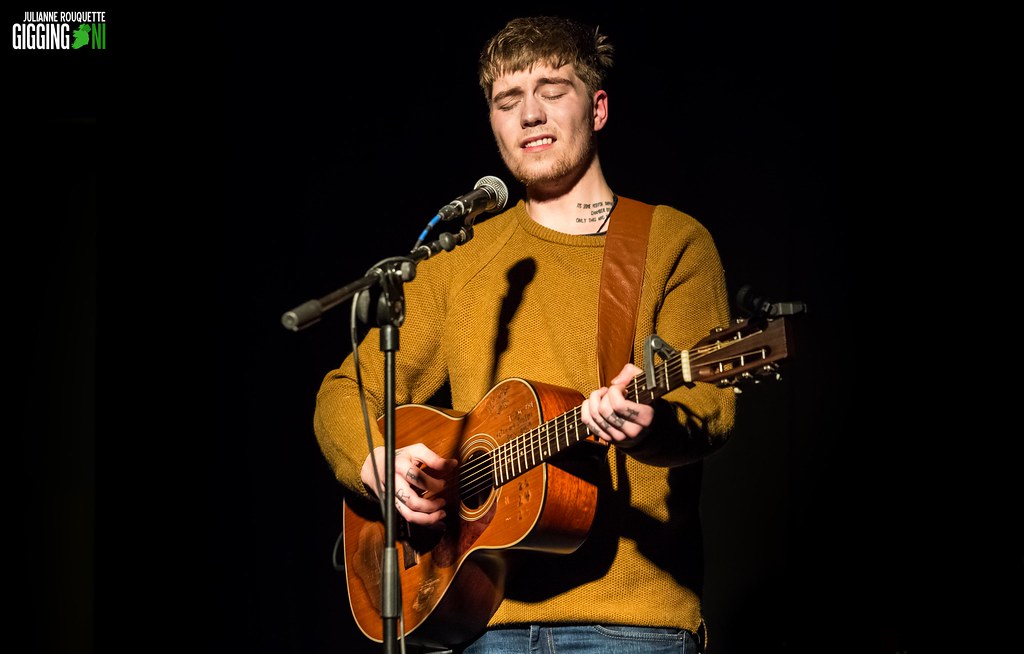