It’s Erasure at the Olympia: Mk. II tonight given that their first Dublin concert run in that venue in late January was cancelled because singer Andy Bell had a throat infection. Or rather, Erasure at the Olympia: Mk. II [b] because it’s the second night of the three night run. Audience members who might have been apprehensive of another cancellation last night are reassured. The band are in the building, last night went ahead as planned and the support band are already onstage. This is definitely happening. Speaking of the support band, Ekkoes are a playful mix of electronic pop with occasional descents into mild funk, singer Jon Beck having an almost Marc Almond-like quality to his voice, pleading with a disco energy. They rhyme “feeling” with “healing” in “Fight The Feeling” which is a little cheesy… but this is an Erasure concert. Cheese is welcomed.

Darkness falls and the stage set comes to life. Strip lights arranged into picture frame and doorway shapes glow a moody red as two dancers (later revealed to also be backing singers) move to the theme from ‘Tales Of The Unexpected’. Vince Clarke appears silently on a platform above it all, framed by the neon bars; sombre, besuited and looking for all the world like a Bond Villain but there’s no time to concentrate on him and perhaps that’s the way he likes it as vocalist Andy Bell is here in the centre of a neon box; straddling a chair burlesque-style and the smooth beauty of “Oh L’Amour” begins.

Ever conscious of the welfare of Andy’s most prized instrument – his voice – we can hear a hesitancy in certain notes, a resonance that should be there which is slightly lacking. He apologises between songs for being croaky and jokes about a little nip of whisky helping him… which, miraculously, it seems to. He’s apologetic quite a lot actually, asking if he’s being random – which he undoubtedly is – while his stage banter ranges from talking about his chin, the weather and the downfall of wearing tights being, well, their falling down. Because yes, he’s wearing tights, flesh peeking through the bold black pattern. The outfit is topped off with a blazer sporting distressed paint-dripped shoulder pads which gets whipped off soon enough to reveal a black sequinned t-shirt with a pink glow-in-the-dark ‘Thrasher Magazine’ slogan.

This being the tour to support the 2017 album World Be Gone we are of course treated to songs off the new album. They’re presented to us gently with no expectations that we already know and love them, although naturally the hope is there. He even tells us the titles, likely knowing full well that a large portion of the audience will be there for a ‘Greatest Hits’ experience. “Just A Little Love” is the first such song, Andy telling us they’re going to play it and looks to the audience “If you don’t mind?” Vince dourly brings out an acoustic guitar and strums as the song throws everything at us to try and endear it to us: a thumping bass, repeated “Love, love love” backing vocals. They needn’t have worried. Half the audience are already singing along, clearly familiar and the other half are willingly receptive, as they are to all the new album tracks. “World Be Gone” and “Take Me Out Of Myself” are probably the most impactful of the new album songs tonight, the former a soothing journey with ice-cool production, the latter a slow build, a gentle roll that has something of the epic about it.

The night has been a little troubadour torch song filled up until a certain point, the turning point being an ultra vivid “Chains Of Love” that goes full on disco party and the audience remember why they are here. “Sacred” displays a fully warmed up voice while pink lights split the venue and the synths glisten. Andy, being uncharacteristically physically reserved up until this point begins to let go during “Phantom Bride” engaging in some hip-wriggling and toe-touching with a quick battery pack adjustment afterwards, no pun intended. “Blue Savannah Song” is predictably yet satisfyingly lit in blue as Andy croons and Vince creates synth glissandos, the audience reaction being so pronounced Andy seems genuinely touched, briefly touching his hand to his face.

Vince is unmoved. Or perhaps Andy’s simply preparing to remove his t-shirt to reveal that what we earlier thought were tattoo print tights are not; in fact it’s a flesh-coloured tattoo-print full bodysuit that he gyrates in gloriously through the rest of the show, seeming finally at home on the stage and rips into a searing version of Blondie’s “Atomic”, doing the robot while Vince prowls on the platform above. “Stop” is a joyous experience all round, the audience mirroring Andy’s outstretched ‘stop’ hand gesture back to him and “Always” proves in a way that none of the other songs could that his voice has fully recovered, although how could it not with 1600 people holding it aloft? Three minutes which prove perhaps to the doubters that carrying on a show in January with a throat infection wouldn’t have been anywhere near the full experience.

There’s only one choice for the encore really and we’re not at all surprised when it turns out to be “A Little Respect” but do blink in disbelief when Vince brings his acoustic front and centre and cracks a tiny smile under the force of the audience love.

Scroll through our photo gallery by Tremaine Gregg, below: 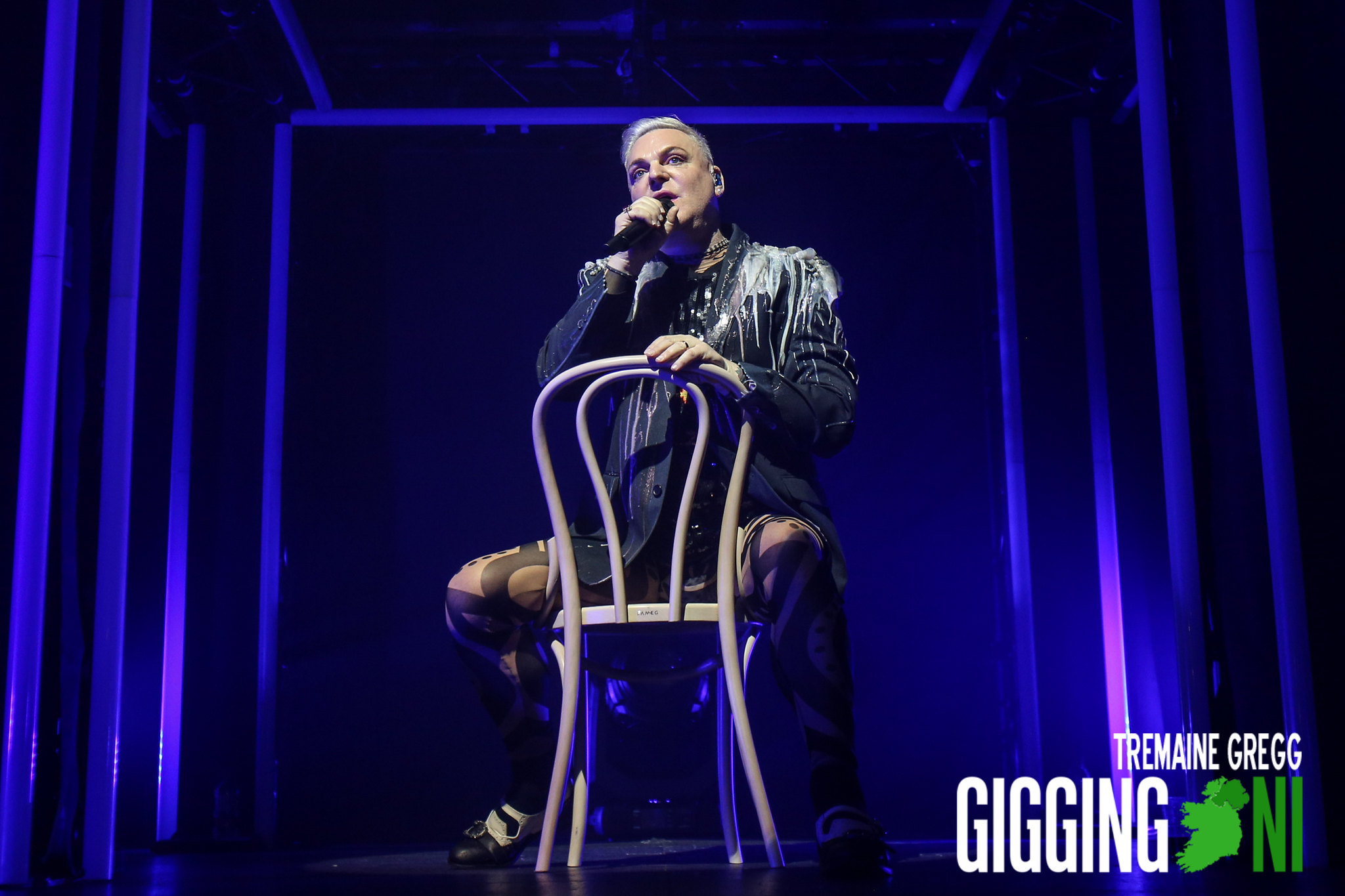