It is very rare to go to a live gig and think that every single song sounded so much better than it does recorded.  This was the case with MØ on Tuesday night in Belfast.  After the original postponement, she gave her absolute everything to this performance and ensured everyone knew that it was worth the wait.

The night started with local band Blue Americans.  From their first song it was easy to see why they were supporting MØ.  Their chilled synth sound with pop vibes and incredibly strong vocals made them a pleasure to watch.  Their pacing was a good change from what we were going to get from our main headliner, so they eased the crowd into the evening.  They finished their set on their track “Apparition”; they were very reminiscent of the 1975 but gave it their own twist.

When the lights on stage go down we all knew what was happening, cheers erupted from the crowd as the band walked in.  Then the blonde diva strutted on stage in her 90s, sporty spice esque style and went straight into “Roots”.  The slow build up of the song was played so well.  She was down on her knees singing and feeling the music before we even got to the chorus.  We went from a very thought provoking performance to dancing on a podium and constant dancing around the stage.  This was the first song and already we had caught a glimpse into what the rest of the night held.

Her crowd interaction was pretty much instantaneous as she shouted out “Belfast!” before explaining this was her first ever time in the city.  After her brief introduction, the upbeat 90s style guitaring started as she began to sing “Slow Love”, from her 2014 album No Mythologies to Follow.  This song was a change from what we had seen before, it’s so reminiscent of the great music divas and was a real showcase for what her voice can do.  Whilst the music was flawless, MØ’s voice really made this track spectacular.

Her setlist throughout the night was a huge variation of all of her releases.  We had tracks from the When I Was Young EP, such as “BB” and “When I Was Young”.  She also showcased songs from her album No Apologies to Follow as well as new songs such as “Nostalgia”.  Every song she sang sounded completely different, there is no clear theme with her music, but her vocals bring it all together.  It is clear to see she likes to experiment with genre and instruments, it ensures her music always sounds fresh and original.

Throughout the entire night MØ didn’t stop moving.  If she wasn’t dancing, she was leaning over to the crowd or walking amongst them.  Her energy was unrivalled and was reflected by the crowd dancing along with her.  The song that got everyone in the room moving and singing was arguably her most famous collaboration, “Lean On”.  As soon as the iconic intro kicked in, everyone in the room went mad.  After the high energy performance MØ said her goodbyes and left the stage.

Naturally this incurred the standard Belfast chanting of ‘One More Tune’, to which she quickly obliged.  She came back on stage within a matter of minutes whilst shouting “Belfast, you want to hear another song?”.  She ended the night with two more songs “Don’t Leave” and the aptly named “Final Song”.  It felt like a real personal performance as she was constantly singing to the crowd and dancing along with everyone.

I think I can hands down say that MØ’s gig was one of the most exciting that I’ve been to in a while.  Her constant dancing and moving whilst never missing a note was nothing short of incredible to watch.  She made sure that everyone in that room had a good time and it made the original postponement worth the wait.

View the full gallery by Conor Kinahan by clicking on the photo below: 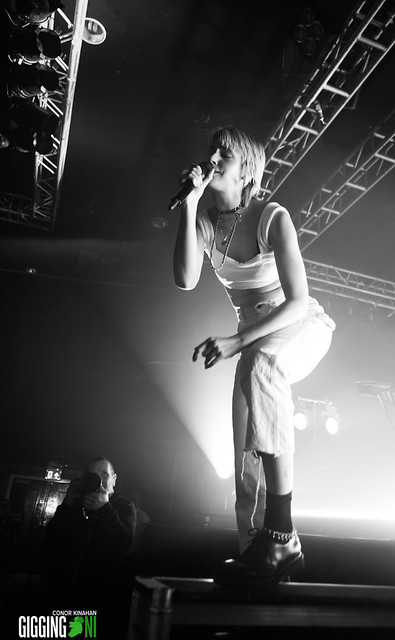